Whether you love him or loathe him it has to be said that filmmaker James Cameron is a true visionary in the movie world and he has managed to produce some of the greatest cinematic experiences of our generation. Over the course of his career he has directed two of the most successful movies of all time, created and continued to embrace new and exciting filmmaking technology and has even arguably achieved the most difficult thing of all – to direct not one but two movie sequels that are considered to be even better than the originals.

ALIENS (1986)
Ripley was back and she was as badass as ever. In 1986 Cameron had the unenviable task of following up Ridley Scott’s incredibly genre-defining sci-fi horror ‘Alien’. And he quite literally came out all guns blazing. A solid script, well-conceived effects, great performances and plenty of all-out assault of Alien action made this sequel even better than the first.

TERMINATOR 2: JUDGMENT DAY (1991)
He said he would be back and he wasn’t joking. Seven years after he bought the iconic Terminator to our screens and introduced the world to Arnold Schwarzenegger the team were back together in this ingeniously imagined sequel. The sheer success of the movie inspired a cult fandom as well as spawning various games like online slots at Royal Vegas and other merchandise and collectible memorabilia. But it was the idea of re-imagining the original Terminator character and turning him into the good guy this time around that made this action-filled epic even more brilliant. 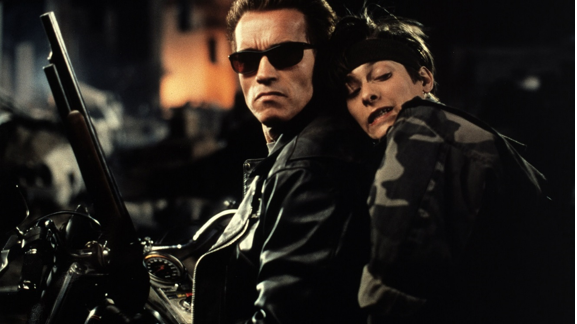 TRUE LIES (1994)
Proving that he does in fact have a sense of humour Cameron joined up with Schwarzenegger once more for this action comedy in 1994. Arnie plays secret agent Harry Tasker who keeps his day job a secret from his slightly bored housewife Helen, played wonderfully by the great Jamie Lee Curtis. Looking for some adventure in her mundane life Helen ends up meeting another man and Harry is quickly on the case. It’s a funny, over-the-top and perfectly pitched popcorn movie.

TITANIC (1997)
At the crux of it Titanic is a disaster movie. It’s been sugar-coated with plenty of warmth and heart and it has a healthy respect for the sad and devastating real-life events of the sinking ship. But it’s the sheer scale of the project for its time that means that it deserves to be in this list. The romantic story woven around the disaster may be sickening, and it may even be ridiculously clichéd, but respect where it’s due. Titanic was the most successful movie of all time for a number of years, raking in a massive $2.1 billion, and that was until Cameron returned to the helm for his next money-spinning project, Avatar.

AVATAR (2009)
Following the global success of his previous effort ‘Titanic’ it would be a long 12 years before we’d see another proper movie project from James Cameron. Of course he was obsessed for most of this time with underwater documentary features and thankfully during this time this previously shelved project was finally able to get a kick start as the technology caught up. It was CGI heavy and this sci-fi epic utilised motion capture animation techniques made famous by its use in the ‘Lord of the Rings’ trilogy. It was incredibly ambitious and relied on a number of innovative visual effect techniques further pushing the boundaries of modern filmmaking.