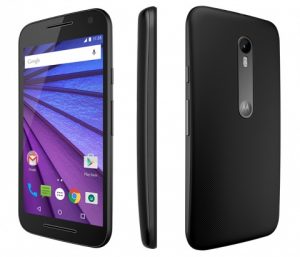 Motorola knows that their Moto X series phones are one of the most popular Android phones available on the market. It’s well-built, customizable, sleek, premium, runs a practically stock version of Android and has been consistently considered one of the best if not THE best Android phone available. You would think with all of that fanfare and praise that the Moto X would easily be Motorola’s best-selling phone right? Wrong. It’s not even close. It’s the Moto G.

The Moto G is Motorola’s best-selling phone of all time. Why? It’s a lean version of the Moto X. It’s perfectly sized, runs a near stock version Android like the Moto X, well structured and most importantly…A third of the cost at under $200 for the base model. The best budget smartphone you can find anywhere. Period. It just got better too. 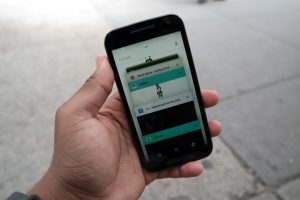 The Moto G’s design is more streamlined from the previous year than completely different altogether. What was little squared off is now a little more curved and it may have shed a little bit of weight. Same basic design so there isn’t much to elaborate on. The Moto G is still all plastic like it’s predecessor but what makes the Moto G different from last year is that this time Motorola has made the Moto G IPX7 water-resistant.

Getting a Moto G this time around is great if you’re clumsy. So, if you drop the Moto G in the toilet, bathtub, sink or pool you won’t have to worry about that being the end of your smartphone. You’re good up to one meter for 30 minutes. The water-resistant element of the Moto G makes it great phone to have on those rainy days when having your $700 smartphone in your hand not such a good idea. What is really telling about the design of the Moto G be it is how Motorola managed to add this feature. They didn’t make it chunky and ugly while being water-resistant which has been a tough balance to strike (hint hint Galaxy Active). Kudos to them for that.

By far the best part of the Moto G in terms of design this year is that it’s now customizable in the Moto maker. You can go online and mix and match your colors anyway you want. It was so much fun to go online and really be able to personalize my phone. Choosing my color scheme from the back plate and even the camera accent panel with Motorola logo can be changed. You can also add engraving with your name or any phrase on your back plate and really have a Moto G like no other. You can also change your phone type. The Moto G has two options 8GB of storage and 1GB of RAM at $179 and the 16/2GB model (which is what I’m testing) at $219. Motorola really went the extra mile to make sure that you don’t feel like your phone is cheap even though it’s relatively inexpensive.

The internal hardware, screen and camera on the Moto G is the where you will begin the notice the difference between a $200 phone and a $700 phone. The Moto G isn’t packed with high-end specs but it does give you some stuff on the inside and you should be able to function everyday with no issue and be pleased. 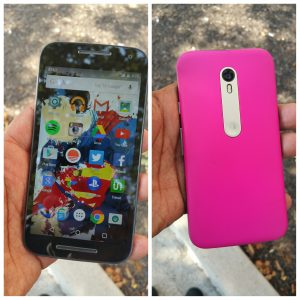 The Moto G is rocking some pretty decent mid-level guts. Its got a Snapdragon 410 4-Core processor, a 5″ 720p screen, 8 or 16GB of storage and 1 or 2GB of RAM respectively and depending on your budget, IPX7 water-resistant like I stated before, supportive of up to 32GB of additional storage in the microSD card slot, LTE capable, 13MP rear camera, 5MP front camera, Gorilla Glass 3, and you get all this while running Android 5.1.1 Lollipop. It’s not a kick ass phone spec wise but what more can you really expect in a budget smartphone?

Now that the tech specs are out of the way now we can get into what the Moto G is really capable of, starting with the screen. The 720p screen on the Moto G isn’t that bad. It isn’t that great either. The problem if you want to call it that, is just that the screen on the Moto G isn’t very bright and for the most part the colors look dull and washed out or even a bit hazy. It leaves me wondering what would the addition of a 1080p screen would really add to the cost. As a result of the screen being so dull using the Moto G in the sunlight was not a good experience either. You’ll find yourself more often than not holding the screen up to your face or squinting to see what’s on the screen. 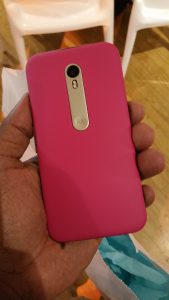 Movies and games weren’t a terrible experience but I’ve experienced better. Watching movies was an average experience and playing games was pretty limited. Some of the more advanced games I played like Asphalt and even SimCity Buildit (don’t ask) crashed more often than not. Overall though, the Moto G did everything else smoothly and I didn’t have any other problems at all.

The Camera on the Moto G is not bad at all. Sure it could be a lot better but for the money you get a pretty decent camera. 13MP in the rear and 5MP in the front. These are pretty standard camera specs for a mid level smartphone and I wasn’t disappointed with the camera on the Moto G.

Cameras are always a subjective thing in my opinion. What one person may see as a good photo someone else may see as a crappy one and vice versa. The pictures on the Moto G were good and some really bad. The biggest problem for the Moto G with the cameras is how pictures look in some of our favorite circumstances for picture taking. In sunlight, some of my pictures ended up looking really bright and at times had a really overbearing glare. Taking pictures normally wasn’t bad at all but when you zoomed in the photos they end up looking really grainy and poor, low light pictures weren’t the worst but you would probably be served better finding some decent lighting.

Although I ran off a list of things that I noticed wrong with the camera on the Moto G it’s still overall a solid shooter for the person who doesn’t need a camera with extensive features, manual focus, burst shot, panorama, etc. It’s a camera for the casual photo taker, the social media photographer, that guy or girl. You won’t hate the camera on the Moto G at all. There are just better ones and if you want one then don’t get a Moto G. 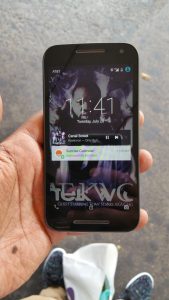 I love the Moto G. I use a multitude of different phones. The Moto G is the phone for everyone. It really is. It gives you the right amount of everything and nothing more. Anyone can use this phone. Anyone. It’s lightweight, good looking, durable, water-resistant, easy to use and most importantly it’s affordable. You have two options with this phone and if you’re going to choose one then make sure you buy the $219 version. It’s a slight upgrade for the specs and spending the extra forty bucks will do a long way here.

I know Motorola would like for the Moto X and all its versions to be the flagship of their phone line. If you ask me though, the Moto G is the gem for Motorola. It’s why they made it customizable and it’s why all Moto G phones now have LTE available, to make it that much better a budget smartphone. THIS is how to make a budget smartphone and it’s no accident or fluke that the Moto G is the most popular phone for Motorola.