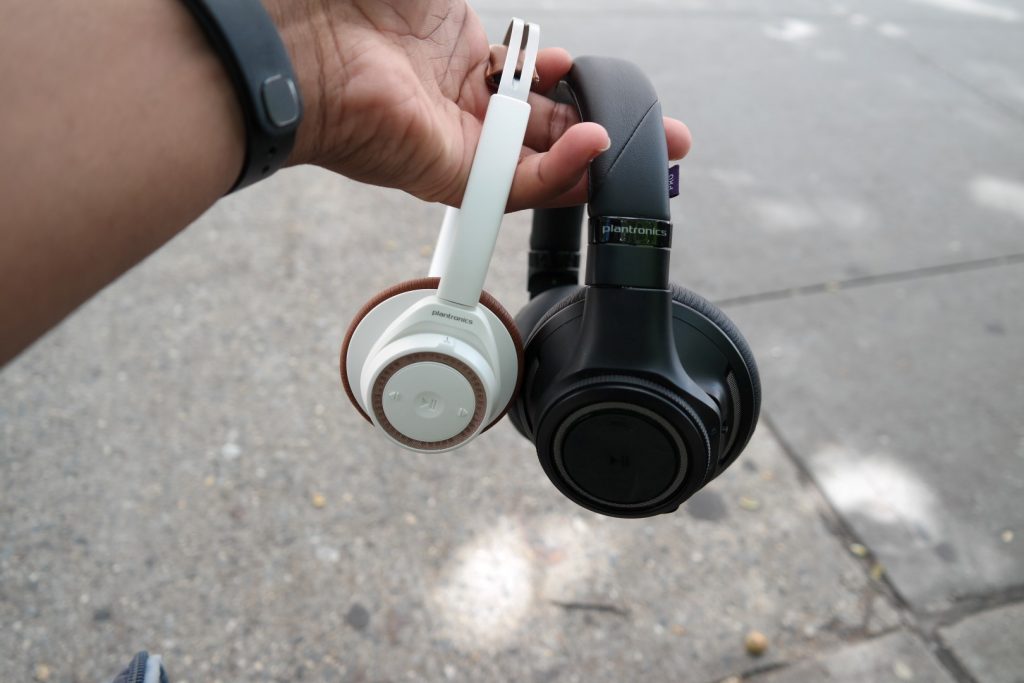 Wireless headphones are becoming the wave as time progresses and I can’t see myself not using a pair. Sure there is battery charging to remember and at times there can be that slight distortion or disconnect from your headphones to your smartphone but nothing beats the freedom of wires. No untangling needed or worrying about that audio cable wearing out. With that said one of my favorite headphones to use in 2014 was the Backbeat PRO. They were revealed last Fall and instantly became a go-to for me. They have comfortable ear cups, great sound, and a multitude of features into the headset. I used these for extended periods on plane rides and would still have juice left. Only problem is summer has come and while these are comfy they can be overbearing. Plantronics recently revealed the Backbeat SENSE a couple of weeks back and I been wearing them since. Think of everything you love in the PRO but smaller. Now the real question for you is which Backbeat is best for you? 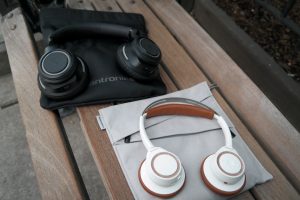 The PRO is over-the-ear and comes in all black. That means black cushioned ear cups, a soft plush black headband and an all-black exterior. Inside the ear cups you can see a solid purple coloring with the L & R initials on each. Headband is flexible which is a plus so you should have to worry about breaking them. Left cup has ANC aka Noise Cancelling controls, an up/down turn dial for track selection and a play/pause button for music. You can also tap your phone on it for NFC. Right side features a button for phone answering, dial for volume control, power switch and the lovely Open Mic button you will grow to love from Plantronics. Also you will notice besides the black is accents of metallic silver on the headphones.

Grabbing the lighter smaller SENSE you will notice they are on-the-ear headphones and are feathery light compared to the PRO. They have memory foam padding which feel great on the ears. While the PRO only comes in black, the SENSE comes in two colors with Black/Espresso (full review HERE) and the stand out White/Tan model I’m covering here. Right ear cup has a power/Bluetooth toggle button, while the left ear cup has an Open Mic button, turn dial for volume control and buttons for back, forward, and play/pause of music tracks.

Also this may not mean much but Plantronics has some of the nicest carry bags for their Backbeat PRO/SENSE headphones. They help provide the headphones with great protection and at times I have used them to carry other things like say my camera or even some smartphones. 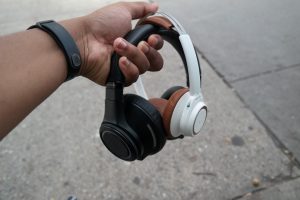 For the most part the features are the same across the board between the Backbeat SENSE and Backbeat PRO. If you are listening to music and decide to take them off the jams stop and as soon as you put them back on the tunes continue thanks to its smart sensors. Both have Open Mic which can be activated by the tap of a button. This allows for being able to hear your surroundings around you at an amplified sound. I notice on the Backbeat PRO when you do it you can still faintly hear music and also adjust the volume a tad, while on the SENSE it will pause the track and un-pause (sometimes) when you are done. Making volume control or track changes slightly differ with the PRO using dial turns while the SENSE is more button presses. The other noticeable difference is the PRO has ANC. Combining ANC with over-the-ear headphones leaves you with a more immersed experience then the SENSE. This is not saying the SENSE sound bad though by any means.

They both produce great sound quality whether you put on the PRO or the SENSE. As stated earlier the PRO since being over-the-ear seems to have a more enriched sound and that could be the whole immersed factor. While they both have nice bass, it’s not booming which can be a good thing or a bad thing depending on your tastes. There are some tracks which I wish I could feel that oomph some more.

When it comes down to it, Plantronics has made two pairs of headphones to fit similar audiences. Some prefer the bigger styling of over-the-ear headphones while there are those that like the smaller on-the-ear style. Either way you go your music experience will be great with either the Backbeat PRO or Backbeat SENSE. Both have awesome sound, comfortable design and rich with features you can typically in headphones in its area or price ranging.