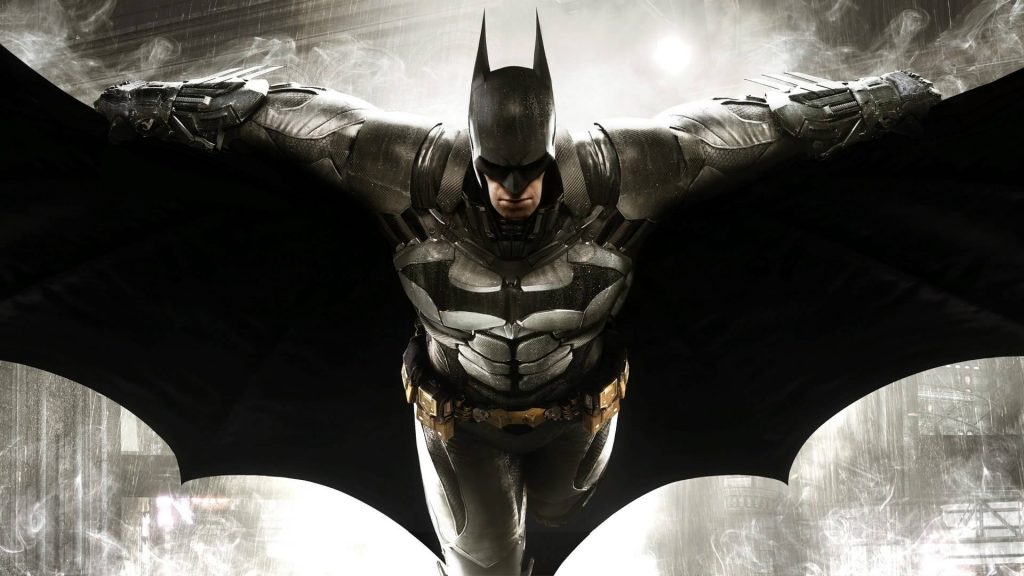 Who would have thought back in 2009 that Batman:Arkham Asylum would be as good as it was and span numerous impressive sequels(sans Batman:Arkham Origins) and now we are at the supposed final game with Batman:Arkham Knight. Playing the series you can see that developer Rocksteady Studios put a lot of work into the franchise from getting things such as comic book storylines down pact to even the popular voice over actors such as Mark Hamill(Joker), Kevin Conroy(Batman) and even John Noble(Scarecrow). Each game added a layer of gameplay on you didn’t think you could get. Arkham:Asylum had you locked in a multi-scale prison while Arkham:City gave a bit of a sandbox to play in with its open world.

Arkham:Knight spreads that open world even further with your cape crusading taking place across three islands. Luckily you have assistance this time from Nightwing, Robin and a trusty speedy Batmobile that can help you get around the city a little bit quicker than on foot. 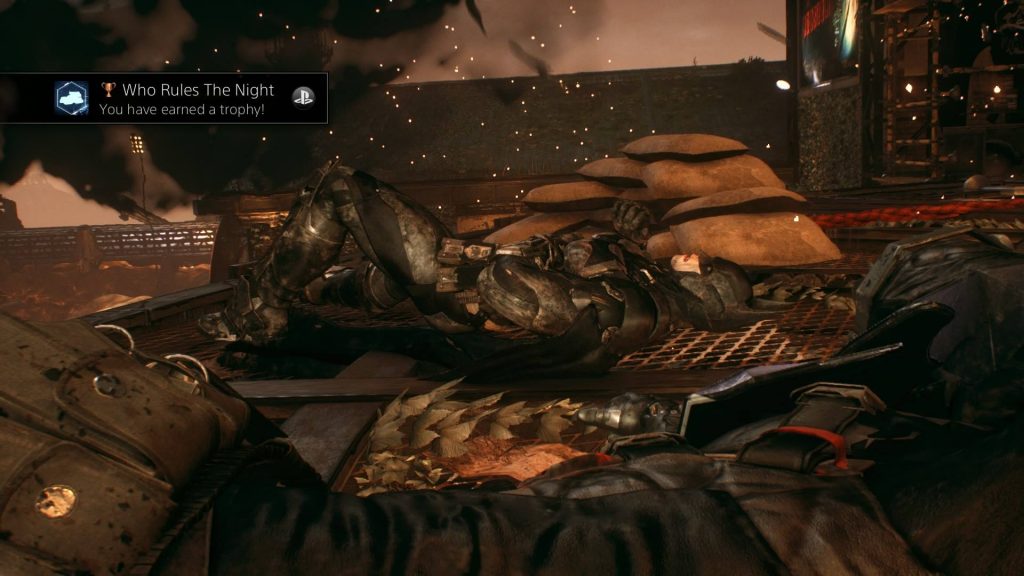 The story takes place one year after Arkham City and if you haven’t played that game then *spoiler alert* for you of coming into this one. After the death of the Joker the City of Gotham has settled down and life seems to be going back to normalcy. That is till on Halloween when Scarecrow has set a plot to spread his fear toxin all over the city. Of course Batman is on the hunt to track down Scarecrow and put an end to this. Along the way Batman does come across various foes in his way such as Poison Ivy, Two Face, and countless others. Besides Scarecrow there is another antagonist which has been deemed the Arkham Knight. There are no records of him whatsoever in the system but he knows everything about Batman down to the type of armor he uses and even his fighting style. With this going on it compels you to want to find out who this mysterious individual is. It’s like dangling a carrot in front of you basically. Besides getting help from Nightwing and Robin you will also get some help from Oracle, Alfred, and Lucius Fox.

Arkham Knight is roughly 5x the size of Arkham City. It’s spread across three islands Bleake, Founders, and Miagani. All the islands look different with some have smaller building while others have skyscrapers. There is a ton of ground to cover and there always seems to be something going on in the streets. Criminals will be wandering about freely via foot or may even try to hit you with their cars if they can. As you progress in the game you will open up side missions which is a lead up to a specific villain for you to take down. There is 14 side missions and one main mission that evolves as you get further into the game. You can realistically skip completing all the side missions and you just do the story if you like. Only thing is that it would help getting those attribute points so you can strengthen Batman. 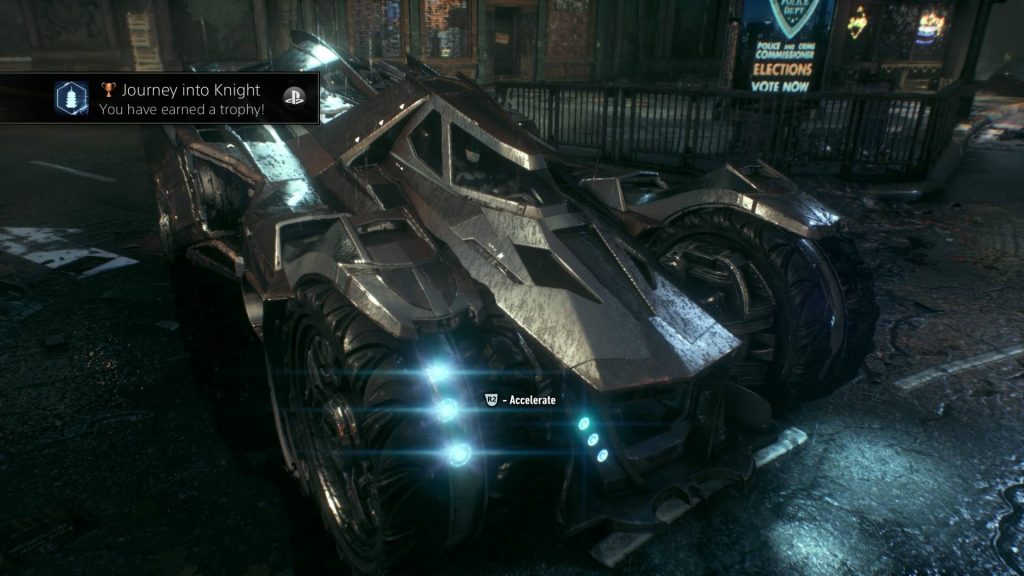 The Batmobile is a nice addition to the series and the fact you can utilize the vehicle in a good amount of things especially missions is cool. There are even some side missions where strategy comes into play and use the Batmobile remotely to take down some foes. Eventually you master the Batmobile as it becomes a vital part of the game in more ways than one. Once you get more upgrades you will see how much a force it is in the game.

I enjoyed the fact that’s not locked down to just one mission and you can essentially do what you please in the game. I did choose more of the route of trying to complete the story rather than side missions but you will need to eventually do them as well if you want to fully complete the game at 100% which shouldn’t be a surprise. 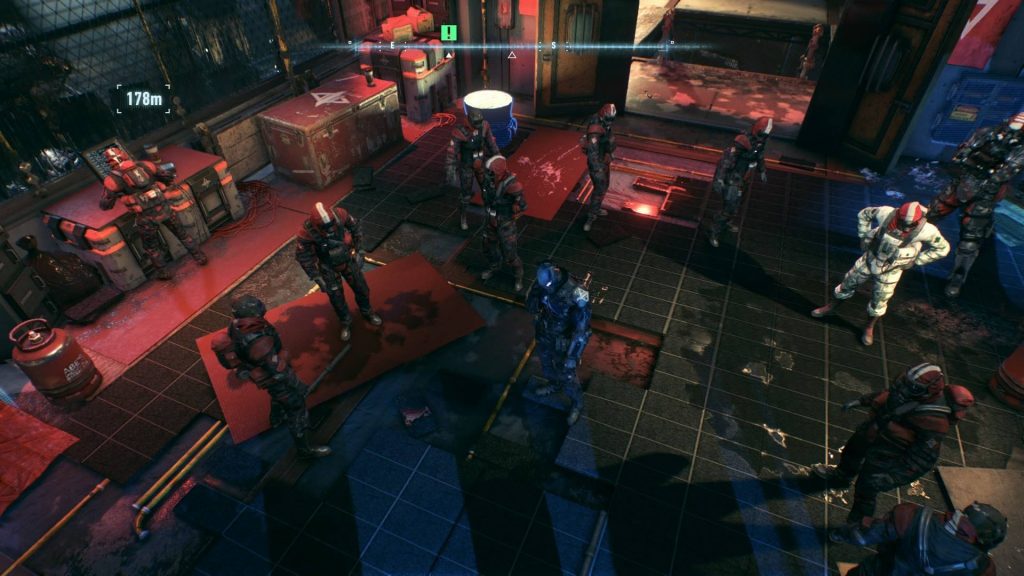 Hand to Hand combat aka the Freeflow System has evolved with Batman having a huge arsenal of weaponry at his disposal. The baddies have changed and they are equipped with anything from bats, guns, to shock sticks to even armor. Enemies will charge at you and sometimes even change their movements. There are points where you face a group with a variety of different styles and you have to think about ways of taking them down. Detective Mode has greatly been enhanced now with Batman using X-Ray vision to find mortal wounds on a victim or watching crime tapes to reconstruct a crime scene. There is a ton going on in the game to peak your interest and keep you entertained for long hours.

Graphically Arkham Knight is a gorgeous game to play. Based on the fact it’s only on next-gen consoles such as PS4 and XBOX One you can only expect it to be. The puzzles they have you solving in this game is pretty awesome to say the least and can at times leave you stumped if you aren’t checking out every little detail.

For those that have made this their first attempt into the Arkham franchise might be disappointed if they are looking for a ton of fist fights in Arkham Knight. I have to say a great deal of the game has you using the Batmobile and maybe a bit more than I expected. The Batmobile while fun to play with can be crazy to drive around with and even at times seems a bit reckless. For Batman being the type to want to save others the amount of damage you can do with the Batmobile is crazy. Some villain battles depending who you went against had me wondering “really thats it?”. Compared to the battles fought in Arkham Asylum and Arkham City I was a bit disappointed to say the least. 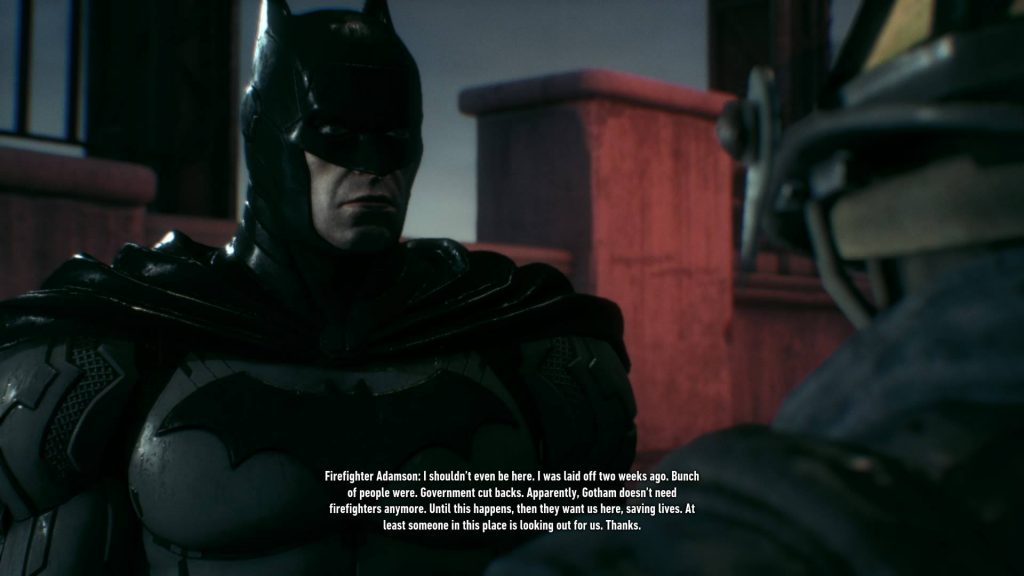 When you first startup the game you of course want to figure out who Arkham Knight is and based on Rocksteady saying it’s a new character it makes you pretty eager. But the more you actually play the game it becomes pretty obvious who it is. If you happen to poke around in the bio the Arkham Knight has the exact weight and height of another character within the story. Of course I was like this really can’t be that easy to find out but alas it was who we all thought from jump. 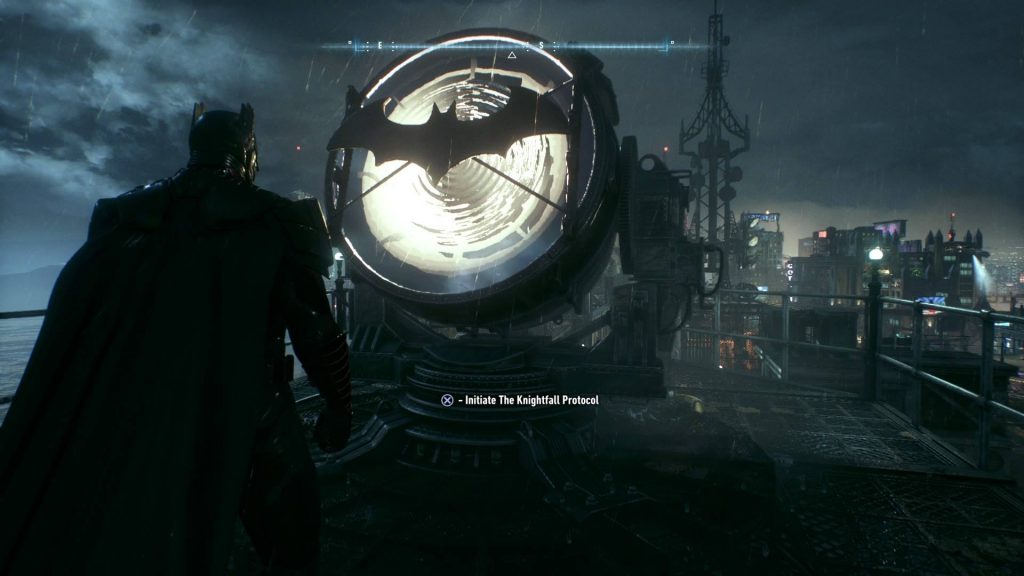 With Batman Arkham Knight being the last game in the series I will say it’s quite enjoyable. Graphically it’s a gem to play on XB1 or PS4 but make sure you stray away from the dreaded PC version that has been pulled off shelves. There are tons of side missions in the game that can keep you going after you are done with everything or if you want to do them while completing the actual main story. The Batmobile while fun to play seems to be apart of the game more than I expected to and the villain boss battles left a lot to be desired compared to past games Arkham Asylum and City.