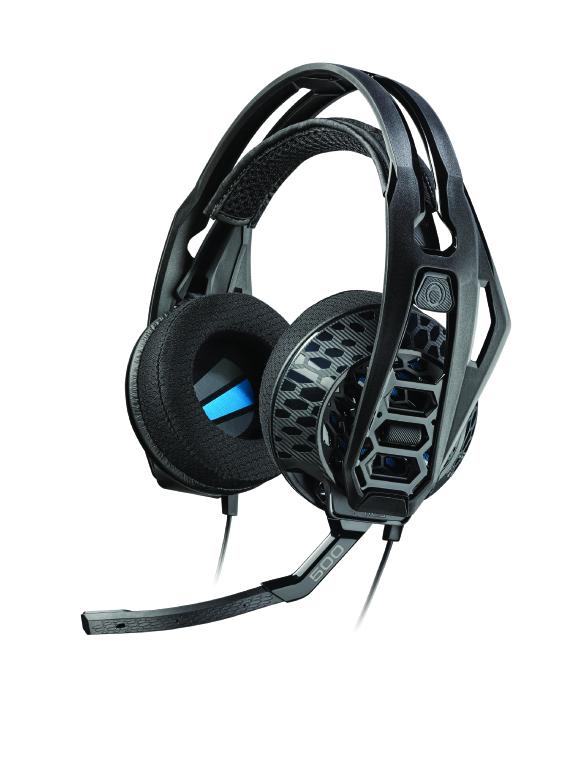 Usually when you hear the name Plantronics, gaming isn’t the first thing that comes to mind. You’d probably be more likely to think about a bluetooth headset or an office phone or device. Of course this isn’t a bad thing because Plantronics has been making great stuff for years but in this case it’s about association to one thing. Gaming.

I always say gaming nowadays is an expensive hobby. We have so much option in terms of games, gaming systems, the internet and accessories. For the true gamer the most important accessory is a quality set of headphones, and Plantronics, while not new to the gaming headphones market is back with a new set of RIG 500 series headphones. They are incredibly light (feather light), modular, and the best part? Under a $200!! Oh yeah!!! 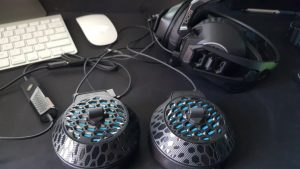 I gotta be honest, I’ve seen a ton of headphones, used them all, played with them all. I know my headphones. The RIG 500e’s is unlike any I’ve seen and used before. First of all they’re modular, which means you can essentially put together every piece of the headphones, yup, it’s customizable. From the earcups, to the headstrap, mic and even the sound card. Secondly and most important, they’re light as a feather. That would be the way to describe these headphones and I couldn’t think of another way to do so, they’re that light.

These are the quintessential headphones to use if you were to equate hours of game play to weight. This is the pair of headphones that you would and should use if you’re a hardcore or professional gamer that has to devote hours to the grind. Everything about these headphones is made specifically with the gamer totally in mind which is why they’re professional grade. They also have a kind of futuristic look to where as if you decided to venture outdoors with these headphones you wouldn’t end up looking like a dweeb with a set of gaming headphones on your head while listening to music. The pair that I have come in all black, although Plantronics has hinted that there will be a number of different colorways in the near future not too far after release so we’ll see. Easily, the design is the best thing about the RIG 500’s but how do they sound? 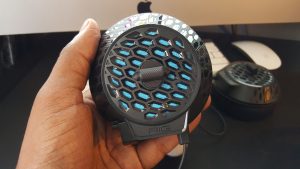 Plantronics paid great attention to detail when it came to the design but would that same detail carry over into the sound? After all, it’s the reason we buy our headphones. I’ll say this, Plantronics did a great job with the audio but the only problem is they aren’t loud enough and that really sucks for a set of gaming headphones with 40mm drivers and where to a large degree the volume is key. Not a deal breaker but I wish they were louder. That’s my knock against them but they’re otherwise very solid all around.

Plantronics made three version of the RIG’s, the standard RIG 500’s, 500HD and the 500e which are more for pro gamers and carry a different price point but still fairly inexpensive. I tested the 500e’s and again, the audio was very good overall. Crisp, not too bassy but just enough, good mids and highs and it struck the right balance as I played all my games, I’m very happy with them. 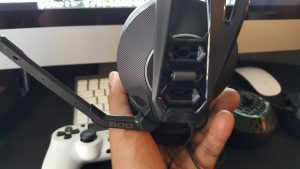 The 500e comes with two sets of switchable headphones, one set is open and one closed to differentiate how you listen to your games whether you want it more open or isolated. Both sets feel nice and they’re fashionable as well as functional. The final piece was the mic. The mic on the 500e’s is detachable and it’s probably one of the better mics that I’ve used on a set of gaming headphone in terms of placement, movement and clarity.

The 500e’s lastly came with a Dolby sound card built right into the headphone cable for further sound enhancement which was cool but I never got a sense of how it helped the game’s audio or any audio at all console wise. Then I realized that the sound card was for PC only and that sucked for me a little bit. When I did use the 500e’s for PC gaming though, the sound was great, crisp and that 7.1 from the Dolby sound card definitely helped. I would like to have been able to use the sound card for both console and PC but since these are pro gamer headphones I understand the reasoning.

Should I buy these?

Naturally the follow-up question would be “Should I buy these?” The answer to that question would be a resounding “Yes”. Without a doubt. The RIG 500e’s is a very cool and overall solid set of headphones. To have a set of Professional gaming headphones that are modular make it worth the $149 bucks alone.

The most important thing to consider is that these headphones are ridiculously light. You can use these headphones for hours and hours and not notice that you have them on. No headaches and the leatherette earcups don’t leave you sweaty and hot. I never realized how much the weight of your headphones comes into play when you’re gaming and the 500e’s nail this.

The customization element is the last part of this to consider when you look at these headphones as a total package. When you buy a set of headphones you usually get them as they are and that’s that. Not here. You have a couple of ways that you can wear these headphones that suit your comfort level or the look you want to have when you go out.

If you consider all of the positives there is no reason not to buy these headphones unless you just have a brand preference. The Plantronics RIG 500e‘s are a gamers must have. Buy a pair and feel like a Pro.