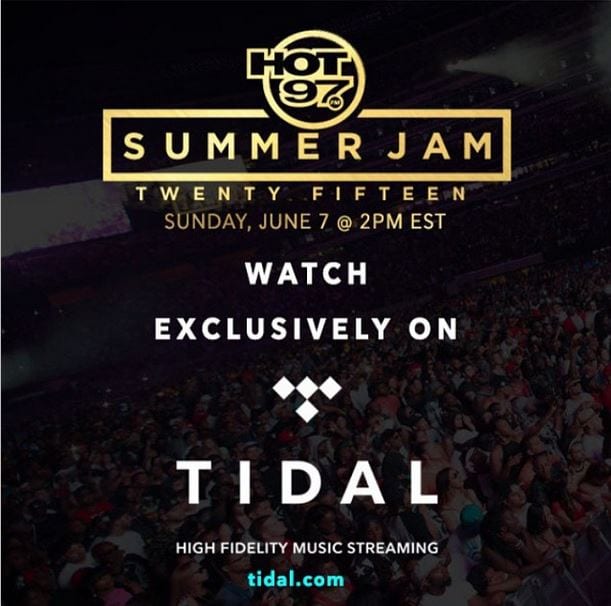 If you haven’t got a chance to get tickets for Summer Jam this Sunday don’t be disappointed. TIDAL is teaming up with Hot 97 to exclusively livestream the event via their app this weekend. Given TIDAL’s track record with streaming events so far this should be a good one. I remember Hot 97 used to do it via USTREAM but the results were usually subpar. A couple of times they even aired it on music channel FUSE but it wasn’t live and by then the concert had come and gone.

This is quite a treat though as you can catch the opening acts on the Festival Stage starting at 2pm and then watch the rest of the show that concludes usually at 11pm. That’s nine hours of content.

Read more about the Hot 97 x TIDAL collabo below and let us know if you will be watching the stream or attending the actual show. I’ll be out there….

“HOT 97 began streaming Summer Jam in 2012 as a way to connect with our audience and fans around the world who may not be able to attend the live event,” states Deon Levingston, General Manager of Emmis NY. “In 2014, more than 1.3 million viewers tuned in to the stream across multiple distribution partners. Given the value of the Summer Jam brand, the performances and behind-the-scenes action, we’re excited to have an exclusive partner like TIDAL behind this year’s event. Through this partnership, HOT 97 is not only able to provide fans with the hottest content, but also able to work with the biggest emerging music platform out today. As the Digital Age progresses, radio must progress with it. We’re excited to work with TIDAL to expand HOT 97’s presence, as well as give viewers a taste of the live action via the stream”

The TIDAL X: HOT 97 Summer Jam live stream will consist of performances from both the Festival Stage and Stadium Stage, as well as backstage interviews, Live Broadcast room, and more!

Only a limited number of tickets are left! Purchase yours today at Ticketmaster.com, all Ticketmaster retail locations or by phone at 800-745-3000, beginning at $63 with special CLUB 97 packages available, which include premium show seats, access to the VIP Patio on the 50-yard line, an unobstructed view of all Stadium Stage performances, and a full-service cash bar are available for $203.

HOT 97’s Summer Jam is made HOT by Pepsi, CÎROC, McDonald’s, Nutrament, MetroPlus Health Plan, HER Imports, & NJ Lottery/Cash 4 Life. For additional information, go to HOT97.com. For the latest news, follow @HOT97 and use #SummerJam on Twitter and Instagram, and friend HOT 97 at HOT97OFFICIAL on Facebook. Text “Alerts” to 75759 for exclusive updates and announcements.