So….Bungie, the makers of the popular game Destiny have finally released their second DLC on May 19th called the House of Wolves. For those who play Destiny the release of a new DLC is cause for skepticism and lack of enthusiasm considering how awful The Dark Below DLC was. 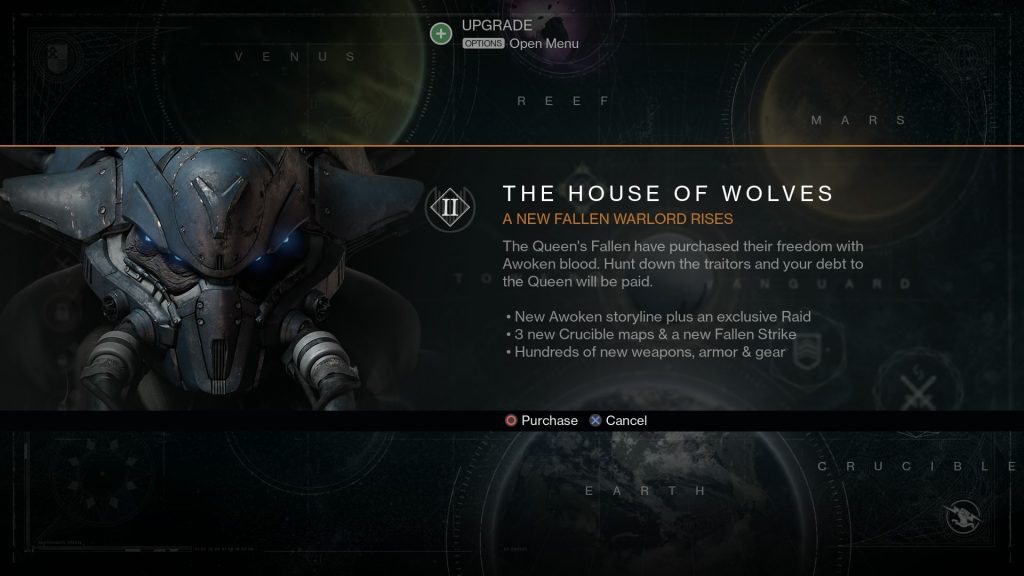 The problem with The Dark Below was that it offered nothing and $20 is a lot of money to pay for nothing. Firstly, it alienated normal Destiny gamers who may not have been interested in buying the DLC, It offered very little in terms of new weapons and armor. We did get a new raid which was good but it turned out later that it was BY FAR easier than the earlier Vault of Glass raid. Lastly and most important that mundane grind still remained. Could the House of Wolves remedy this problem? Did it remedy this problem? After a full week of playing it. I can say Yes and No 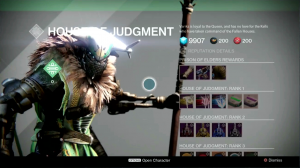 I’m not going to pretend that I understand fully what the The House of Wolves is about. I still haven’t figured out what Destiny is about as of yet. All I know is that a Fallen named Skolas betrayed the Queen of the Awoken and as a result the Queen has put a bounty on his head. She’s now opened up the Vestian Outpost or the Reef (Just like the Queen’s bounties from when Destiny first released) as a second port aside from the tower for the guardians to take up her bounties and hunt down Skolas and his minions. With the help of Variks (a Fallen now working with the Queen), and Petra Venj they will outfit you with the armor, guns and bounties that you need to complete the mission for the Queen.

The House of Wolves is what The Dark Below should have been when it was introduced awhile back. This is what the hardcore Destiny players wanted for their $20 bucks. What the House of Wolves offers Destiny players this time around is something to do and something to play for. Yes, that repetitious grind is still there but this time around it isn’t so mundane and loathsome. 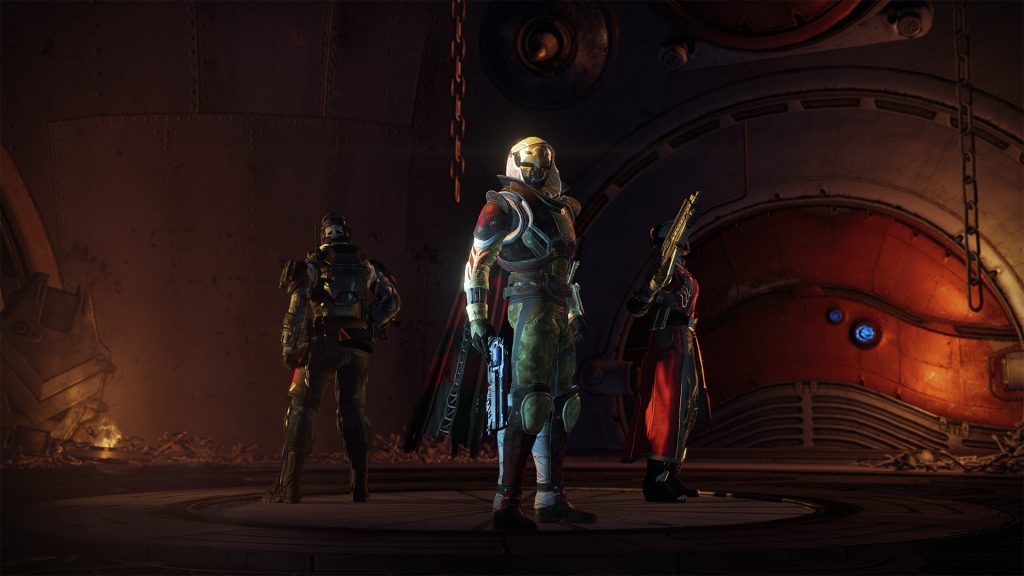 The House of Wolves has a horde mode style competition called the Prison Of Elders. It’s monitored by Variks and in this arena players go through five rounds of non-stop shooting and survival. Each round can vary and some of the rounds have a “modifier” which can change how the round is fought by either giving the players an advantage or an extreme disadvantage. For instance, there’s a modifier called Small Arms which favors primary weapons and gives them an added strength bonus, It’s super helpful depending on which wave you’re own and which level of PoE you’re involved with. In the case of when you’re disadvantaged by a modifier there’s one called “Trickle” which reduces the speed of your charge abilities so you’ll have to be more mindful when throwing grenades or using a melee attack.

To further add to the difficulty some of the rounds there are goals that have to be completed otherwise your party will be completely wiped out. You may have to diffuse or destroy randomly placed mines or you may have to kill a moving target before it reaches a set of checkpoints. The PoE has 4 levels starting from 28 which has matchmaking and continuing to 32,34 and the impossibly hard 35 which do not have matchmaking. All in all the PoE is not revolutionary, essentially it’s just horde mode but it is fun and adds some replay value to Destiny which a good thing. The weapons and gear you get from completing the PoE is worth the replay in itself. As long as you keep doing your bounties and finding those treasure keys then doing the PoE over and over is not so bad. The payoff makes it worthwhile. 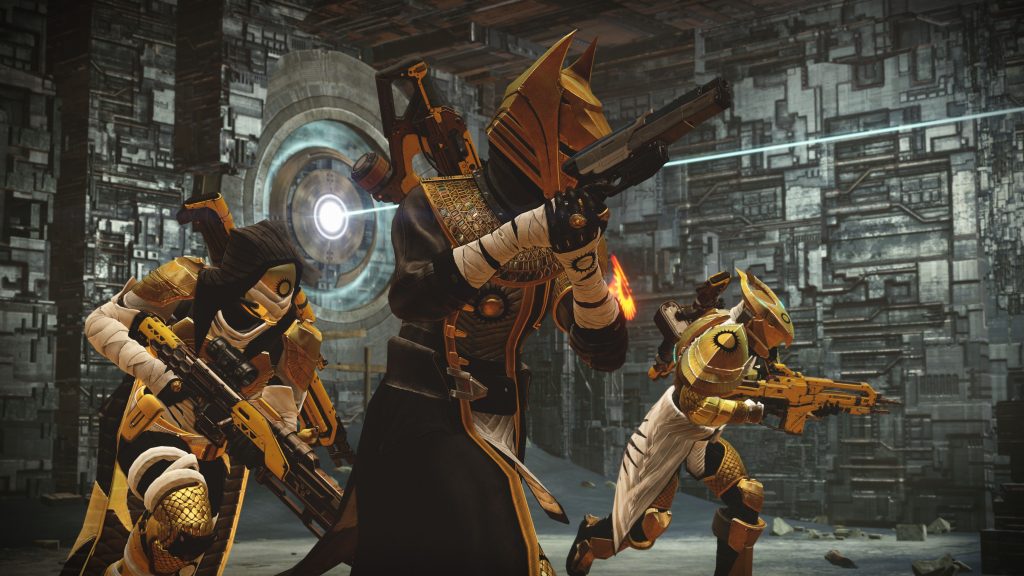 The Trials of Osiris is another added activity to the HoW DLC. It’s basically a high stakes version of the Salvage part of the crucibles. It’s available every Friday until the weekly reset on Tuesday.

With the Trials of Osiris you have to be skilled. I mean really skilled and you BETTER be level 34. It’s not for the novice player or level 32’s. There is no matchmaking, it’s completely cooperative and it’s a situation where communication is key to survival.

You start off by getting a “Passage Coin” either from Brother Vance who is the overseer of the Trials or you can get them as random drops from events here and there. Once you get your coins then you and your team of three are off to face the Trials.

Of all the HoW has to offer, this is easily the one thing that adds the most value to the DLC. The rewards that you can earn are not easy to get and they really push Destiny players to challenge themselves. The concept is survival and Iron Banner rules apply here. It goes like this, the first team to five wins is declared the winner of that match. Simple, however it takes strategy in terms of weapon choice and knowing the layout of the arena to which you are fighting to win the match. If you’re good enough to win 9 matches without defeat then you gain access to the ‘Lighthouse” and this is where you get some of the most rare gear, shaders, weapons, etc. A lot of incentive to play the Trials and play it often.

The only downside that I had with the Trials is that everyone uses the same weapons so you can get yourself killed really quickly and that took away from the experience just a bit for me. I would like to have seen Bungie add weapon restrictions each week but I guess I can add that to the list of things Bungie can do to fix Destiny. 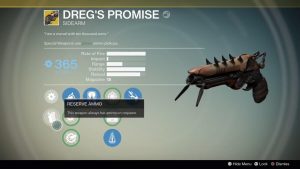 House of Wolves has really made an effort to add new weapons, armor, exotics, shaders, etc, etc to the game. I mean this time around they added so much new gear overall that you’ll see a lot more individuality in how people dress up their characters and outfit them weapons wise. With HoW you won’t see everyone walking around in Crota raid gear with a Vex, Suros or Thorn every time. This is one the best aspects of the update. It was a much-needed addition and it’s players can choose more weapons that suit their play style.

The ability to ascend all weapons and armor that are legendary or exotic is a great addition as well. I have so many weapons in my vault that you can no longer get in the game like the Shadow Price for example. Now with the ability to ascend to the 365 weapon level it allows me to use it again and be effective. The same thing is applicable to Vault of Glass weapons and gear that maxed out with a 30 light level. You can ascend Exotic weapons and armor with exotic shards that you have stockpiled or you can buy them from Xur for 7 strange coins. You can ascend legendary gear with a new item called Etheric Light which can be obtained in the PoE levels 34 and above, It’s also strangely more difficult than obtaining an exotic shard, go figure.

The House of Wolves is a really good add-on to the Destiny game. It gives most of what we expected from The Dark Below. The lack of a raid doesn’t hurt the HoW at all. For me it’s actually more fun to go into the raids and really kick some ass now that I’ll have stronger weapons and armor. Is it worth $20? No. I haven’t met a DLC add-on that’s worth that and this is no different.

Again the best part about the HoW is the replay value it adds to Destiny. I believe at any given time they still have 5-6 million people logging on practically every day to play it. So they aren’t lacking for a user base. Even the players that bitch and moan and complain the most find themselves still playing everyday and those who stopped playing may find some interest in Destiny with the DLC but maybe not, it’s been kind of long time from September.

The worst part about the DLC? It didn’t save the already convoluted and hard to understand story element of the game. I get that the Queen is now involved again but the story still sucks. I also would have liked to at the very least heard some whispers of Oryx, after all, Crota is his son and if there is to be a raid in the likely fall update what’s it going to be about? Tell us something Bungie.

Either way logon get your game on and do some PoE and run the Trials (make sure you get to level 34 first) and maybe you’ll see me out there (@CheapGeekMike if you wanna find me). Have fun. Shoot em up