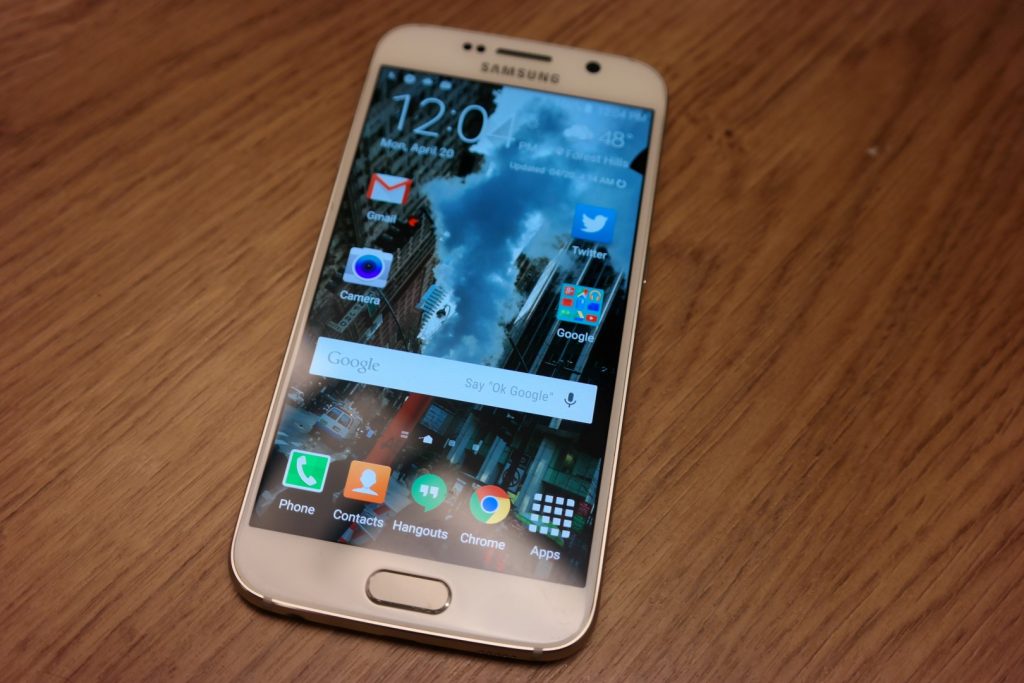 Back when the Samsung Galaxy S6 was first announced, I figured it be the same old device with just new specs and the usual TouchWiz bloatware. Getting my hands on it and playing with it turned out to be a pleasant surprise from Samsung that I haven’t realistically got from them in a while. Samsung has gone with the usual moniker of “if it’s not broke, don’t fix it” for years playing it safe but the risk they have taken may turn out good for some and distance others. The Samsung Galaxy S6 could be one of the riskiest moves they have made in their Galaxy S line and looks to be all worth it. 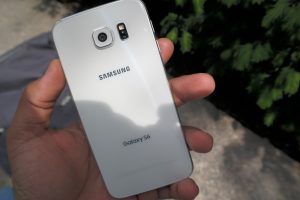 We clamored for a change from Samsung and we seem to finally gotten it. The Samsung Galaxy S6 rips away all the plastic we got used to seeing and goes for metal and glass. We have Corning Gorilla Glass 4 on the front and back while circling around the phone on the borders is aluminum. I know first response is “oh it looks just like an iPhone!” It does strike some similarities on the bottom where the microUSB, headphone jack, mic and speaker rest but that’s about it to me. The glass body actually reminds me of the Sony Xperia Z phones that have been out for quite some time. If you look towards the top there lays another mic and an infrared sensor which you can use with a TV and it has some pretty good range. I tested it in a Buffalo Wild Wings last week and got some interesting results. Chiseled on the left side is volume a control while on the right is a power button and where the microSIM is nicely concealed.
Holding the Galaxy S6 in the hand will just make you sigh a breath of fresh air and appreciate change. It’s also surprisingly light and I used to think the Galaxy S5 was pretty weightless. Being that is covered in glass though you don’t get as much grip as you used to and may want to slap a case on it. Also what you may have already known, the ability of battery swapping and microSD cards is over. 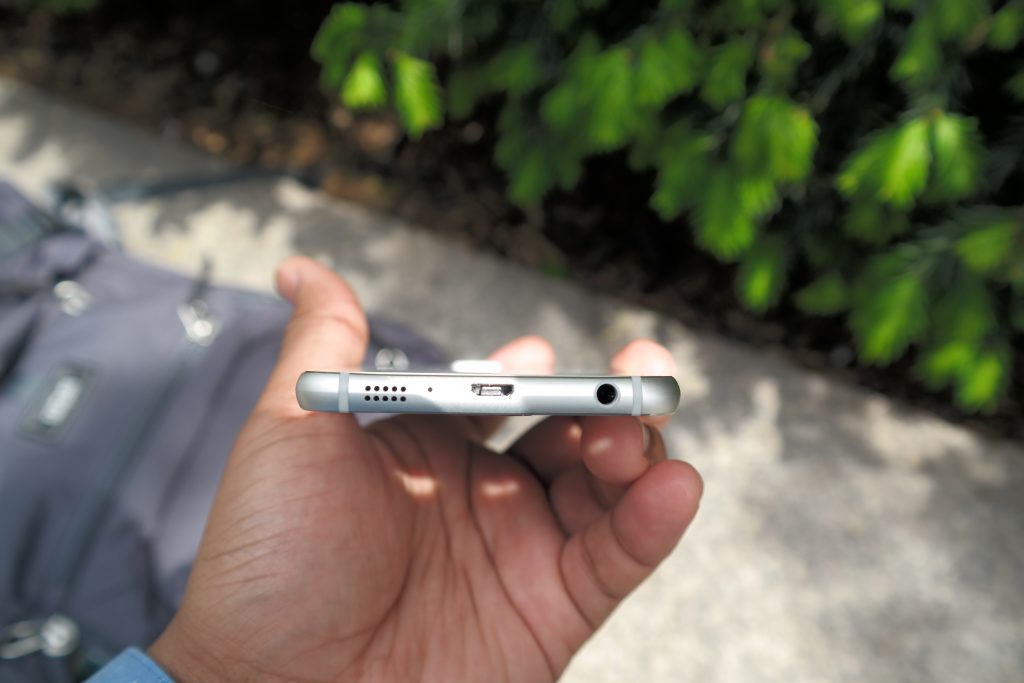 The Galaxy S6 has an embedded 2550mAh battery and no slot to change cards. I always been a fan of expandable memory and couldn’t understand them not fitting it in somehow. There are options which vary on your taste. You can opt for a larger built in storage size with 32, 64 or 128GB. Cloud options such as Google Drive, OneDrive, and Dropbox exist. The last option is grabbing on of these handy SanDisk Ultra Dual USB drives. They are cheap and can be used with just about any Android smartphone (or tablet).
The design of the Galaxy S6 is great and I love saying that seeing the same builds over and over from Samsung. I’m not too big a fan of the protruding camera on the back though as it makes the phone look uneven when being rested and leaves the lens open for scratches. Besides that it is one of the best crafted Samsung devices we seen in quite some time. 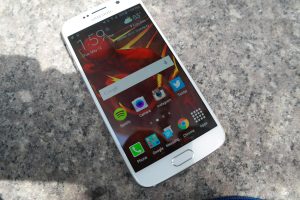 Samsung has always had bright vivid screens but they stepped up the game with it having 577ppi making it one of the cleanest, most crisp displays on the market today.

The Super AMOLED screen is still 5.1” like the Galaxy S4 and S5 before it but the resolution is now a QHD display (1440 x 2560 pixels). While colors look vivid QHD displays have always been power hungry to me and I feel it takes a toll on the S6. I find myself charging it a good bit as I tend to play some games and watch movies on it constantly. Also to really appreciate the quality you need to view content to match its taste. Using the S6 out in the sun has always been a gem as it adjusts to daylight and makes everything more visible.

Samsung has usually gone with using Qualcomm for their US models and their own in-house chips for the rest of the world. That has changed and the Galaxy S6 is using an in-house Samsung Exynos 7 Octa 7420 processor chip, 3GB RAM, and 32GB (also avail in 64GB/128GB). All this adds up to one of the speediest Samsung Android smartphones I have used. This thing takes a licking and keeps on ticking. Multitasking, opening & closing apps and its response time are impressive. As I mentioned earlier the battery is 2550mAh and is probably my least favorite of the Galaxy S6. It’s smaller than the S5, and steps under the 3,000mAh batteries we are getting accustomed to seeing. 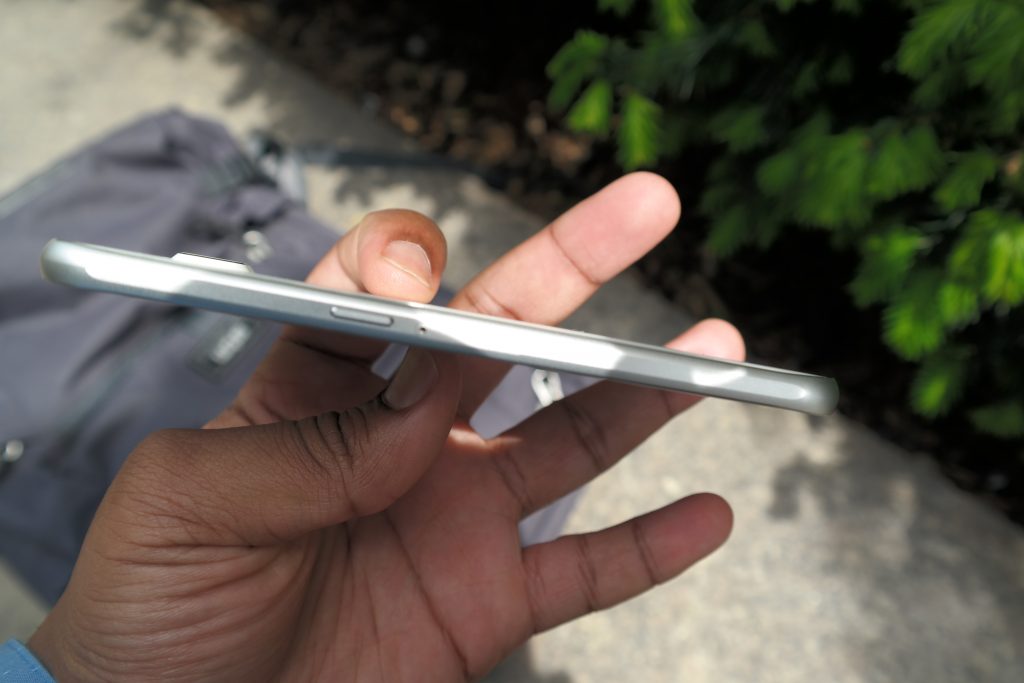 Luckily Samsung has given you options of Wireless Charging and Quick Charging to help ease the pain. Quick charging works great on the S6 and you could be back up to full life within a little over an hour. Wireless charging isn’t as fast but it’s a great option when you have one nearby. Samsung also did a great job on the Home button. It has a nice click to it and don’t feel like you have to struggle to press it like prior models. 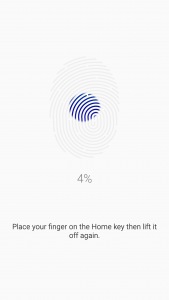 I think Samsung has finally got it right. Of course the Galaxy S6 has TouchWiz but it’s changed a deal from past iterations. Where devices like the S4 and S5 were littered with features you may or may not needed, the S6 has toned it down tremendously. This has caused the S6 to run extremely fast and not encounter the “Samsung lag” I was used to for years. If you want features not available you can most likely just download them from the Samsung App Store. Besides that the S6 is running Android 5.0(Lollipop) and it fits with TouchWiz pretty good. Navigating through options and screens are speedy and buttons like the Recent button pop up in a snap.

One of my favorite additions to the Galaxy S6 has to be the fingerprint scanner. Where with the S5/Note 4 you had to do some horrendous swipe down, on the S6 all you do is tap and that’s it. You can set it up to work on various fingers at a time. Like I usually have it set for my two thumbs. It works great just like on the iPhone 6. Samsung also has it incorporated in couple apps like PayPal with many others on the way.

It doesn’t get any better than the cameras on Samsung devices. The Galaxy S6 still has a 16MP camera but the Aperture size has been lowered to F1.9. This allows more light into the lens for brighter shots and also has OIS (featured in Galaxy Note 4) for those shaky hands. I have used the S6 in various settings and this phone just takes some awesome shots. Sure it adds a bit more color than needed at times but it still does the job. Samsung also made it that if you quickly double tap the Home button you can open the camera instantly. This works in any app or any location and I haven’t seen the ability to open a camera any faster on ANY smartphone.

On the front there is a 5MP shooter that will make your Selfie shots look great and it still records video at 2K. The front cam has been pretty good for providing clean shots for apps such as Snapchat or using it with other video or image apps. The back camera still shoots in up to UHD (3840×2160 or 4K) like the Note 4 and S5 and video quality is still on point. It has done a slight better at recording sound at say booming concerts but nothing to go crazy about. Check the videos shot in daylight and a club setting and pictures to see how the camera puts in work on the Samsung Galaxy S6.

I have actually tested out coverage on the Galaxy S6 with Sprint, T-Mobile, and AT&T here in NYC. Service has been solid with them all and you can click on each carrier to give you a better idea of coverage. As far as any carrier differences, of course T-Mobile has the Download Booster and they all have a crazy amount of bloatware attached no matter who you choose. Thankfully most can be deleted or disabled.

First and foremost, hands down the Samsung Galaxy S6 is one of the best Android smartphones on the market. While it still resembles the look of yesteryear Samsung devices on the front, the introduction into glass and metal is welcome. Omissions of microSD and removable batteries may alienate dedicated Samsung customers but I think if you give it a chance you might not miss it. The Galaxy S6 runs fast as hell and takes some of the best pictures out there. The battery does leave a bit to be desired but with options such as Wireless charging and Quick Charge 2.0 you can’t go wrong.

The Samsung Galaxy S6 is available in White, Gold, and Black (with more on the way) and on various carriers starting as long as $0 down depending on where you look.