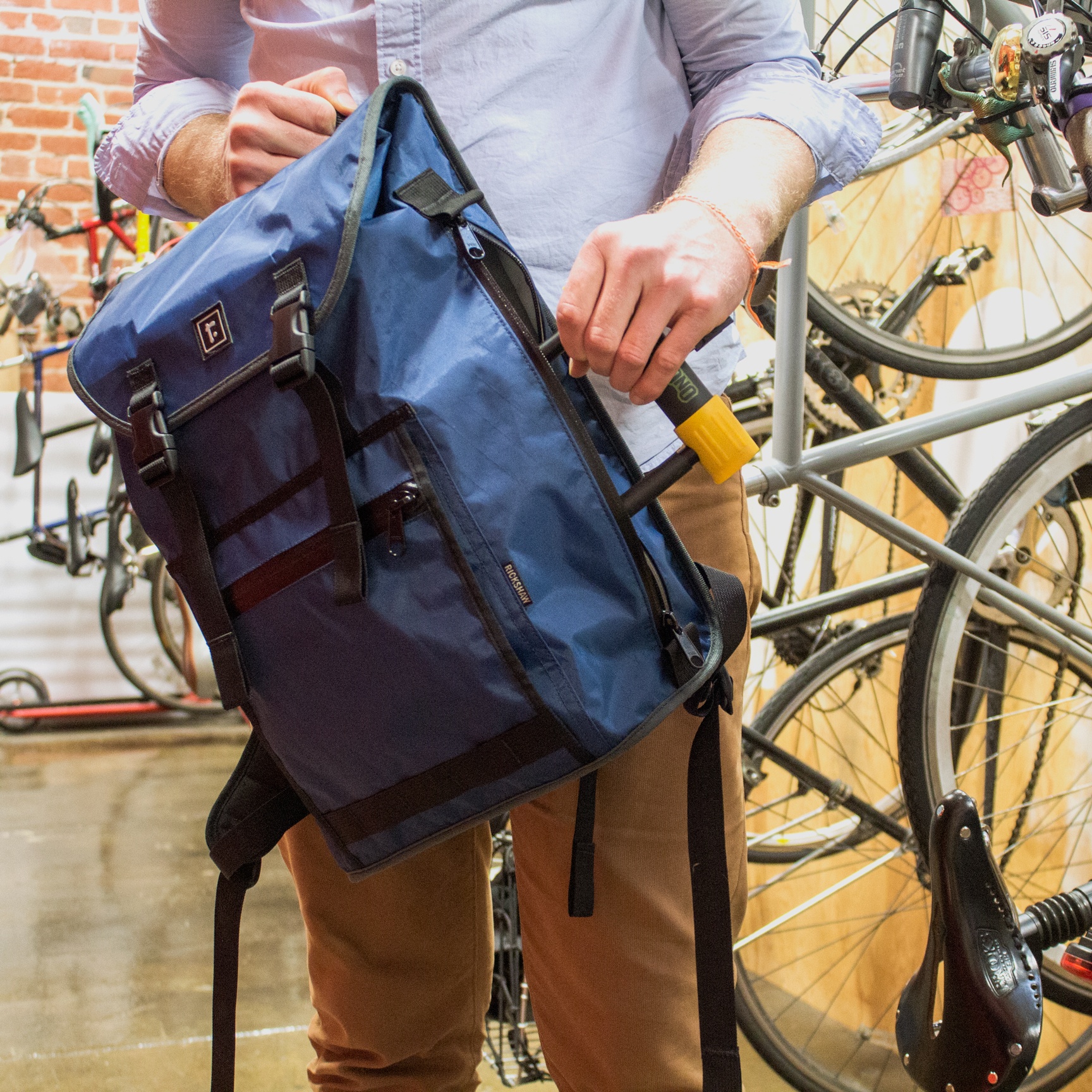 Not all backpacks are created equal.  I’ve learned over the years that there are different backpacks for different situations and there really is no such thing as a perfect backpack. A backpack that might be great for the office might not be so great for adventuring and vice-versa. For instance, I have a backpack that I take to work with me every day that holds all of my gadgets and supplies, but I wouldn’t use it for something like a trip to Disney. It lacks space for other things like a jacket or if I want to throw in something miscellaneous. That’s why on trips or short outings, I use a different backpack that is more suitable for adventuring and that’s why I’m taking a look at the Rickshaw Bagworks Sutro Backpack today. Specifically, I’m looking at their new ‘Reflective Tweed‘ version of the bag in the striped pattern.

Rickshaw Reflective Tweed is their own custom fabric, specially woven in the USA, and made from durable polyester and 3M Scotchlite reflective yarn. What that means is you will not see this material anywhere else on the market except on Rickshaw bags. It also means that this version of the Sutro Backpack is perfect for both day and night use thanks to its highly reflective material. 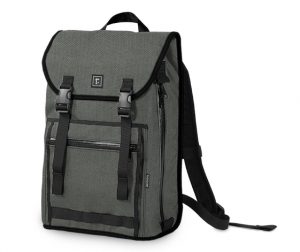 The Rickshaw Sutro Backpack is a rather attractive looking backpack that doesn’t look like your traditional backpack. The main enclosure does not use a zipper mechanism and instead the opening is folded over and then buckled to stay securely shut. I’ll talk more about the main compartment in a bit but first let’s stick to the exterior of the bag. It’s a very clean design that looks very classy and sophisticated and one that looks more adult. By that, I mean it’s a bag that doesn’t look like something a kid would be using and goes well with relaxed and casual attire.

Pockets on the Sutro Backpack are lacking with there only being two compartments. There is the large main compartment and a smaller zippered front organizational pocket. There is a slightly misleading zipper on the side of the bag that you would assume is another pocket of sorts, but it’s not. Instead, this is actually a rather unique feature you don’t see on most bags. The zipper is a quick access opening for the main compartment so you can get to what’s in there without having to unbuckle the main compartment. This is useful if you just want to reach in to grab something quick. 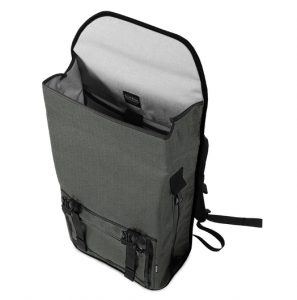 Speaking of which, let’s get to talking about the main compartment. The interior is lined with X-Pac sailcloth which is abrasion resistant and waterproof. What that means is that whatever you put in there will be protected from wet-weather climates. Whatever you put in there is going to remain dry no matter what the weather is like. That’s great because there is a built in laptop sleeve in the main compartment and if you choose to carry around your laptop or tablet, you’ll have the peace of mind that it will remain safe and dry. The sleeve is large enough to hold a 15-inch laptop. The rest of the compartment is huge and deep. You can fit a ton of stuff in here such as a jacket, your camera, books, extra gear, etc. The Sutro Backpack also features an expandable tube that can make the main compartment even larger and can still be closed using the flap and buckles to secure it.

On the front of the bag is a small organizational zippered compartment. In it are two pockets to hold something like your phone or maybe a pen. The compartment it large enough though to hold a few other things like extra cables and chargers or a battery backup pack. 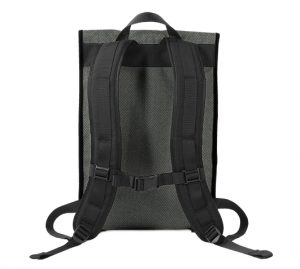 Moving on to the shoulder straps, these are heavily padded and feel quite comfortable when worn. If you’re carrying a slightly heavier load, there is an included sternum strap for increased comfort and weight distribution. The sternum strap can be moved up or down for a more precise fit. On the shoulder straps, there are also daisy chain loops you can use to attach accessories like carabiners.

Of course the main reason for me looking at this particular version of the Rickshaw Sutro Backpack is the special Reflective Tweed. This one as I mentioned earlier is the striped reflective version, meaning the whole bag isn’t reflective, just where the stripes are. Do they work as advertised? Heck yeah. The reflective parts are super reflective, even in dim lighting. In the daylight, you can see the reflectiveness and it almost looks like there is a light source inside the bag emitting the glow. The reflective tweed seems to do exactly what it says it does so if you’re one who is need of a reflective bag, and of the Rickshaw bags with this material is worthy of your consideration.

The Rickshaw Sutro Backpack holds a lot of stuff, as long as you don’t mind shoving everything into the same compartment. I’ve been using it for a couple of weeks now and though I do mention that’s not really a bag that you would use for office use, I used it anyways. On outings, it swallowed up anything I could put in it. I was able to carry around a light jacket, a small umbrella in case it rained, my PS Vita, my Sony NEX 5n with a much larger lens, an extra phone and a backup batter charger with still plenty of room to spare. 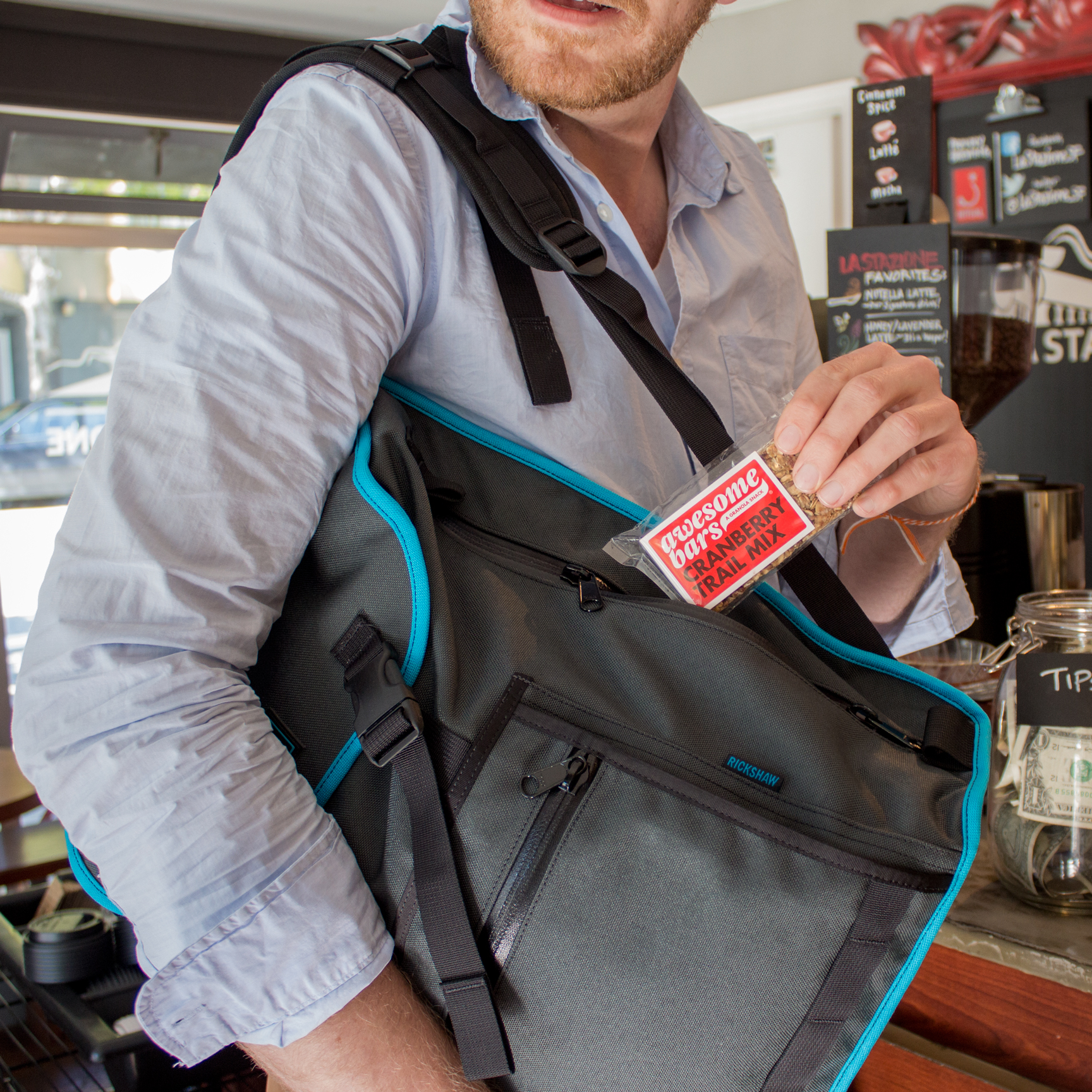 For the office, I had to improvise with the lack of compartments and what not with zip lock bags that I placed in the front zippered pocket. It’s far from elegant, but it got the job done. However, I missed really having all my stuff organized into its own little pockets as everything had its place, so I think I’ll go back to using my other backpack for the office and reserve the Rickshaw Sutro Backpack for outings and family adventures.

The Rickshaw Bagworks Sutro Backpack makes for a mighty fine casual daypack. It is very comfortable to use and contours nicely to my back. There is plenty of space in it to carry around most of what you’ll need on an outing and thanks to the materials used, you’ll know that your stuff will remain dry. Not only that, it is rather stylish and will go just as well with a t-shirt as it will with a casual button down shirt.

This bag however is not for those who like tons of pockets for organizing their stuff as there really is only the one giant compartment. No, this is for those who don’t mind just stuffing it with things no matter where it goes and just being happy with the fact that engulf a lot.

With that said, the Rickshaw Bagworks Sutro Backpack isn’t for everyone and while it might not be perfect for you, it might be perfect for someone else. For me, it’s a great addition to my bag collection and something I can use on an outing to the zoo, a theme park, or even a nice day walking around town.

The Rickshaw Sutro Backpack comes in many different types of fabrics and colors. In fact, Rickshaw allows you to customize this bag in almost any color imaginable and with any type of fabric combination that they have available. This is truly a bag that can fit any person’s tastes. The regular bag runs about $199 while the special Reflective Tweed versions run for (striped) $279 and (full) $379.