Back between 2012-2013 I did reviews of the most popular American muscle cars. I reviewed the Chevy Camaro, Dodge Challenger, and the Ford Mustang GT. The Mustang was the last of the 3 I reviewed and I definitely enjoyed driving it. Out of the 3, the Ford Mustang GT was what I considered the most stylish of the group, I said it was the prettiest. This wasn’t a take away from its muscle car label, but I had to note how good-looking this car was. Now in 2015 I’m back with the Ford Mustang GT again and Ford has redesigned the look of the Mustang. Does it still hold the title of prettiest of the group? Still the most attractive? 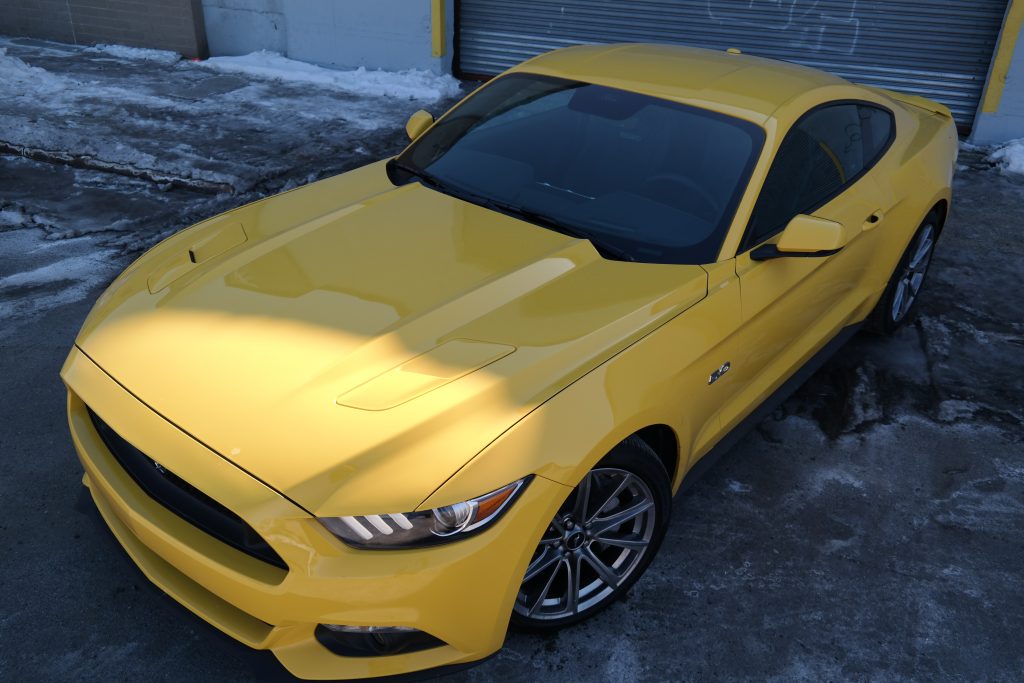 Hands down the Mustang still owns the title of most attractive of the group! From all angles the redesign of the Ford Mustang have been positive. From the front to the back, Ford has smoothed out the look to create something that retains the spirit of the Mustang, but gives it a more modern chic feel to it. In the front you can see the changes in the front grill upon first approach. Gone are the lights that use to be on the sides of the pony symbol, they have been moved lower to the ground leaving the pony to stand alone. Now places at the sides of the bottom grill which also has been slimmed is a better place for them. The front also seems much wider in stand now giving it a low and wide look. The headlights have also been redone and they definitely look more sexier now. From the front some people who asked about car on the street commented that it has this Aston Martin feel to it now which they look. Make no mistake if the Mustang GT comes into your view from the front, you will do a double take or linger a bit to check it out! 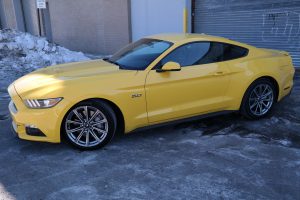 When you look at the Mustang GT from the side, it looks longer in appearance. This works well as you travel from the front to the sides. Which leads to a better looking backside than it had before. Just like the front, Ford seems to have smoothed out the backside and removed some items that might have looked okay before but now seeing it in hindsight look awful. The very first thing I notice about the back is the removal of a protruding circle that was the home of the GT badge on the trunk. This time around this huge circle is gone and simple has the GT badge on the trunk without the protruding object. This gives the back a much cleaner look, which always appears to be slimmed and sloped down some. As you go from the back window to the trunk lid you can see if slopes down seamlessly. Before the back window dropped down to the trunk, but now seems to slide down to it. The rear lights have also been change and given a more chic look upgrading from the old. As you move to the lower end of the back where the license plate is, you can see the design changes and removal of extra items that didn’t add anything to the look. This stripping down has led to a Mustang that is very chic, very modern, but still with the spirit of the Mustang.

On the interior you can see many similarities with the Recaro seats, but I liked how they updated center console. Gone are the generic looking buttons and knobs, replaced with something more analog feeling. I especially like the switch flipping buttons along the bottom row that changed a few of the driving modes. Little changers all around make for subtle but more prominent look inside. This does well with the outer look also. 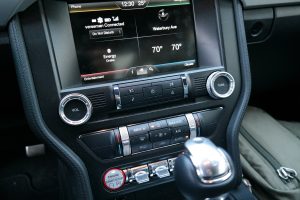 When it came to the tech, unlike before it satisfied my needs and was great to use. All the features in the Mustang GT complimented well with the look and feel of the car. This was a muscle that blended all the modern tech into a car that was great analog so to speak. The digital items added didn’t take away from it, but meshed well. Of course all the basics where on-board. Satellite radio, and Bluetooth connectivity was present with the ability to stream my music from the phone (this is always a priority for me!).

Man driving this Mustang GT was amazing! I really didn’t want to give it back, right up until we had a lot of snow in New York City lol. From the moment I left my office building and see it parked across the street I absolutely loved this car. It looks truly amazing no matter which angle you notice it from. And this was pretty much the case for the entire week I had it. I would notice people stop, stare, snap pictures, point, ask questions about it, and give me the thumbs up! Everywhere I went people were quite taken back by it. 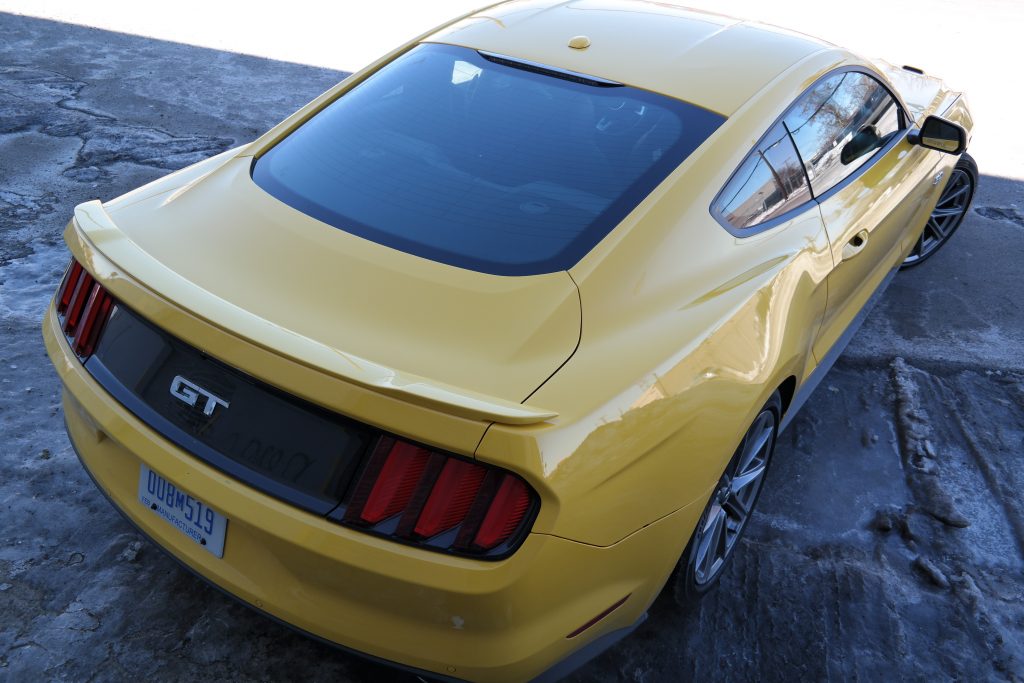 The Mustang GT was just a fun car to drive. I mean it is a Mustang, acceleration was good, so was handling and maneuvering. I definitely enjoyed my time with the Mustang GT. Audio quality was really good from the speakers. Gas like before could have been better though. I think I had to put gas in the car twice during the week period. It never hit close to E, but I put some more in it when it hit a quarter left. Having to do this twice was a negative for me as with New York City driving, I can see that adding up. And then you have the snow. I’ll just say that a Mustang just isn’t building for snowy weather. Sure you can get a little better experience with snow tires and maybe if you had some chains for the wheels, but I definitely had a challenge when the snow came. Right as the last couple days of my review period I had to navigate snow which was very challenging. I had to crawl to get any traction, and had some back-end sliding instances. I avoided accidents but I can see that being very unnerving when the cold climate comes. Other than that the 2015 Ford Mustang GT was amazing! (Can I say that again lol). I’ll need to do my round of muscle cars again this year. Back in 2013 out of the three the Dodge Challenger was my top pick. But this year the Mustang may have just given the Challenger a serious run for its money!

The 2015 Ford Mustang GT has a starting MSRP of $32,300 for the GT Fastback. If you already own a Mustang and thinking about upgrade, I say it is a must! If you are thinking of getting a muscle car and this is one of your choices you may be debating on, I said make this a strong choice. I’ll say it again, this car looks amazing! And it definitely has muscle behind it (just be careful in heavy rain or snow!). If it wasn’t for the snow that hit New York City when I had it, Ford might not have been able to get it back from me!