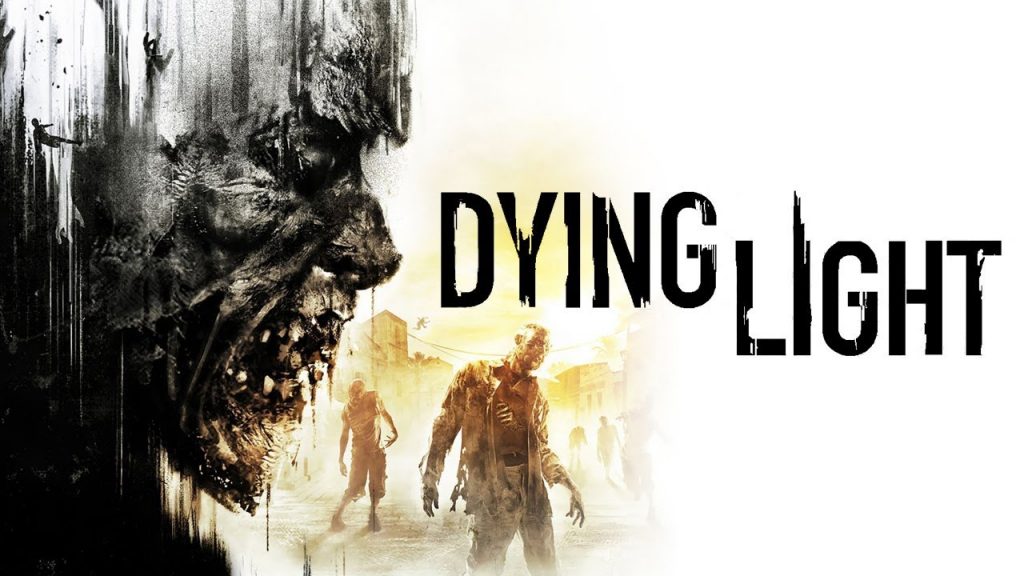 Dying Light is a game that uses the always popular and strangely never boring zombie apocalypse storyline to get you to head to store and pick up their version of a headbusting, blood and gore action game. It’s the same story every time. A virus infects all of the people and there are only a few survivors that are either “immune” or just haven’t been bitten yet. We know how it goes, we’ve all seen the movie or in this case, we’ve played the game. What makes this one different? A few things but it’s still the same ol’.

The story focuses on Kyle Crane, who is an operative from the GRE which is a secret government agency sent to the city of Harran to look for a man named Rais who supposedly contains a file that can destroy the agency. The problem that Kyle is facing is that the city of Harran is currently overrun by zombies all of whom are victims of a vicious pandemic that has basically killed every person in this city who isn’t “immune” or hasn’t been bitten…yet. 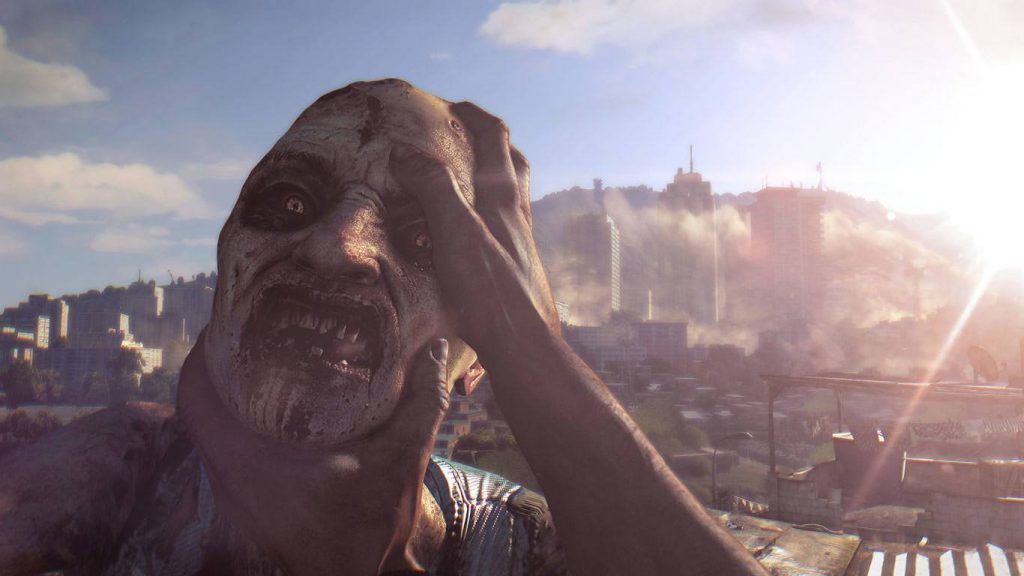 As you begin to start the game, immediately Kyle is on the run and ends up being bitten in an unsuccessful attempt to run away from zombies, and just as he is about to be lunch meat, by a gang of raging zombies, he’s saved by a mysterious woman and a man (who end up getting eaten, sadly) and it’s from here that the story begins.

You wake up in a hospital type safe house after being in a slumber for three days after being treated for your bites. You’re told right to head to a room and find Rahim who appears to be a young captain of a resistance group called GRE.

Rahim is the one whom you refer to for much of the beginning of the game. He vaguely tells you what the mission is ultimately about. He talks about the leader of the resistance group that you unknowingly volunteered for who goes by the name Brecken. After the story Rahim then proceeds to teach you what will become your survival skill that you use throughout the game which is Parkour.

After your training you meet Spike who is the resident engineer / IT person on staff. He’s the one who sends you out on your first mission and first real interaction with the open world. 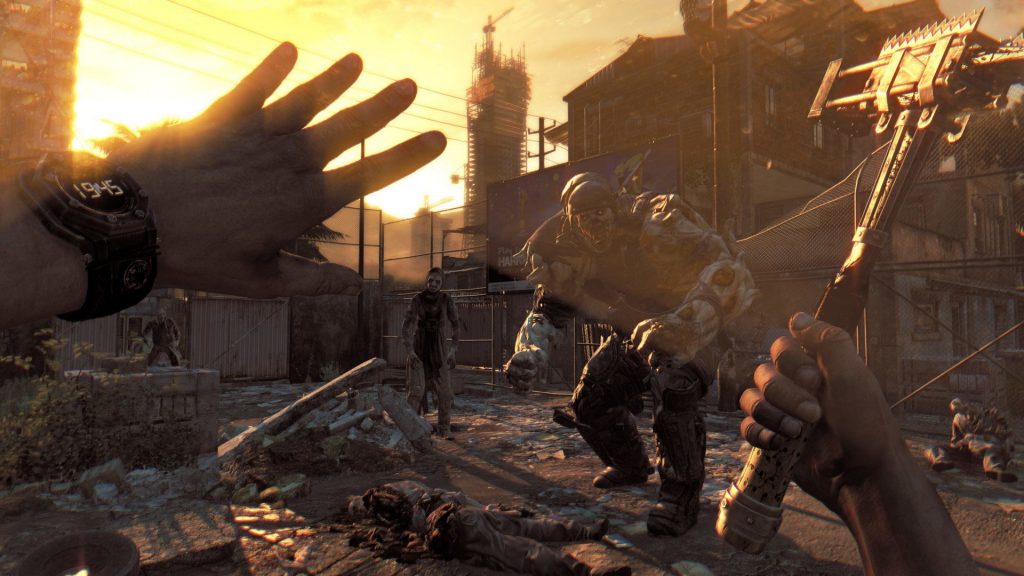 The Dying Light world is vast and the more you’re out in the world, the more often you’ll be performing tasks to secure the city from zombies by setting traps and end up scavenging for scrap parts to make weapons and to things to heal yourself, etc. The more missions you take on you’ll be learning about the GRE (whom you’re working for) and Brecken. All of these tasks will eventually lead you closer to crime lord and rogue agent named Rais (the reason for which you’re in Harran at all). He’s the local bad ass in Harran now, and before too long if you’re good you’ll be recruited by Rais and you’ll be running errands for him. By the way, you’ll be doing all this while trying to survive in Harran, deciding which group you’re going to side with (Brecken or Rais) because they’re both lying to you and all of it is to be done while trying to maintain your cover as a secret government operative. THIS is what Dying Light, from a basic level, is about aside from the obvious flesh eating zombie problem.

There’s a lot to like with Dying Light. Beating the crap out of zombies and watching their heads and bodies explode is always a plus and if you want you can kill all the zombies. Who wouldn’t love that? The ability to use Parkour is a big plus. Although the parkour in this game is not as fluid or as cool as it was in Mirror’s Edge, it is cool nonetheless. Jumping over cars and fences almost effortlessly when trying to escape zombies makes the game so much fun especially once you begin to master it, not to mention you’re rewarded for doing so as well. 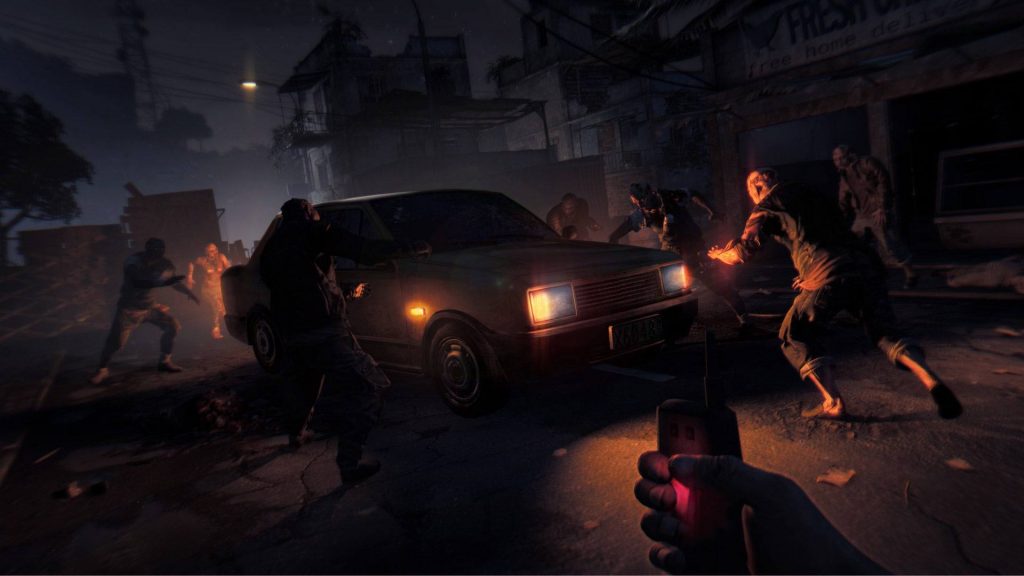 Day and Night completely changes the paradigm. In the daytime the zombies are sluggish, slow and as dumb as you would think a zombie is. So dumb in fact that you can literally run right past them with no consequence. At night however, different ballgame. The zombies are hungry, stronger, smarter and fast. They WILL chase you if you try to just walk past them so being on point is an absolute must. Time and weapons management is essential at night. This element of the game gives you the sense of urgency you think one would have in a zombie apocalypse. The night is scary as shit sometimes in this game, especially if you have on a good set of headphones and are playing in the dark.

Lastly, the brilliance and ingenuity of Kyle Crane. Going around town and collecting different items is a monumental pain in the ass but it’s all to your benefit because of what Kyle Crane can do. He’s like MacGuyver, if you understand the 80’s pun then you know what I mean. It just means that your character is crafty, he can create medkits, weapons, lock picks and whatever you need to survive just from the objects you find randomly in Harran.

Just as much as there is to like with Dying Light there are some things that I don’t like. You may agree or disagree and that’s fine, but for me, the things I don’t like can be a very short list and can ruin my experience entirely even if it’s supposed to be a good game.

Some of the things I don’t like about Dying Light have a lot to do with the controls. The target system or lack thereof in Dying Light was a constant source of frustration for me. The camera controls were very loose and it was difficult to tell at times where exactly I’m aiming at a zombie when I’m attacking them. Many times I found myself hitting a zombie in the body or just in the wrong place…period. The bad part is, your weapons can and will break or the zombies will flat out just attack you if you attack them the wrong way. So your aim almost always has to be 100%. The little dot that’s on the screen that you can never see in the daylight doesn’t help when you’re trying to knock a zombies head off.

The missions are plentiful…too plentiful and hard. Sometimes the missions in this game are just annoying and sometimes they’re just suicide missions. Maybe I’m being overly critical here but if I’m going to be out in this crazy zombie world running around doing mundane missions why not give me a gun too? I mean I’ve been in quite a few safe zones and there are soldiers at posts standing around with guns doing nothing, why make me “earn” a gun? Especially since the missions I’m being sent on can and will surely get me killed. I don’t believe giving me gun to combat zombies would have taken away from the game at all. I mean seriously they had guns in the Walking Dead right away. You know why? because guns help kill zombies as well the crazed humans fighting for supplies and drugs that I encountered more often than not. Just saying.

Dying Light is really good game. Its hard not to like it. The parkour, the weapon building, the scenery and the story are all positive aspects of this game. It’s what kept me playing it for hours at a time. The best part of this game is of course the difference in day and night. In the daytime you’re running missions just to prepare for the foggy and always dangerous nights. I love how different and aggressive the zombies become once nightfall hits. Dying Light becomes a completely different game at night. My advice….Play in the dark and make sure you have a set of good gaming headphones on. Trust me.

Is Dying Light perfect? Hell No. There are things about this game that genuinely frustrate the hell outta me but that’s gaming. The missions are boring and at times mundane. Not having a gun right away and making me wait made no sense to me but I understand the need to “earn” it. These are not deal breakers at all. I still loved playing the game. You will too. Dying Light is not a must have game but it is a game that you should play.

Dying Light is available for PlayStation 4, Xbox One and PC.