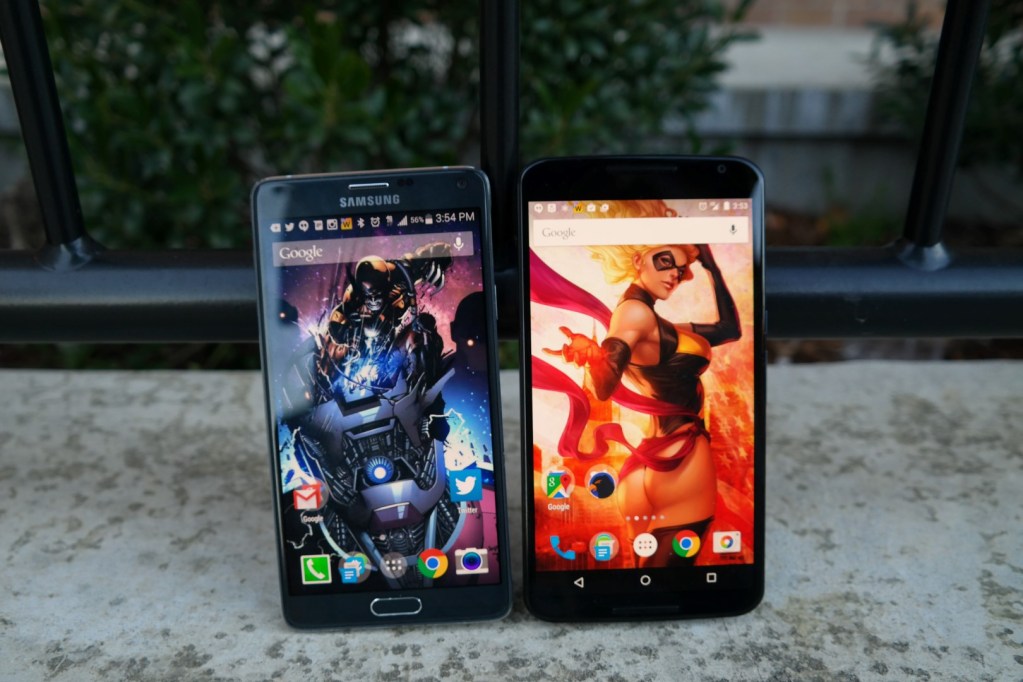 It’s been a big year for larger phones this year with the Samsung Galaxy Note 4 and Nexus 6 leading the way on the Android side. Either device has made strives to become available on all or most of the major carriers and have distinct features that highlight one over the other. Google has handed the reigns over to Motorola and gone into phablet sized territory with the Nexus 6 while Samsung has slimmed the size down of its Galaxy Note series and gave it more of a premium look. Trying to decide which one to choose can be hard as each has some nice qualities that may work for you. Luckily I have test driven both for weeks and hopefully give a clear cut look at which phablet will work for you.

The Nexus 6 and Samsung Galaxy Note 4 while are both similar being large devices their designs are done completely differently. The Nexus 6 is close to 6” tall and has a curved body while the Galaxy Note 4 is also close to 6” but its body is squarer shaped.
The Nexus 6 has a smooth feel in the hand thanks to its plastic body and it metallic edges going around the phone. It definitely can be hard to hold in the hand if you have small ones and can take some getting used to. The finger rest dimple does assist with that just a tad bit. The Galaxy Note 4 on the other hand feels awesome in the hand as it just feels like it’s the right size and has that “leather” backing to provide an overall better grip on the device. Also don’t forget that lovely stylus pen that comes out the right side of the phone.

Both the Nexus 6 and Galaxy Note 4 are beasts in the specs department and are similarly matched with its innards. Each one has a Qualcomm Snapdragon 805 chip housed inside, an Adreno 420 GPU for graphics processing, 3GB RAM, and 3220mAh batteries.
Where they do battle each other is mainly storage capacity with the Galaxy Note 4 coming in a 32GB option and has room to add a microSD card up to 128GB while the Nexus 6 comes in flavors of 32GB or 64GB. Good luck getting the 64GB option as it’s always out of stock and seems to be hard to get. I love my removable storage and it’s always been a thing to look forward to in Samsung Galaxy devices. A couple of things the Nexus 6 has over the Note 4 hardware wise though is there is built-in Wireless Charging and it has front facing stereo speakers. While the Note 4’s speaker on the back may sound adequate that’s until you compare it to the front speakers of the Nexus 6 then you may listen to everything differently. 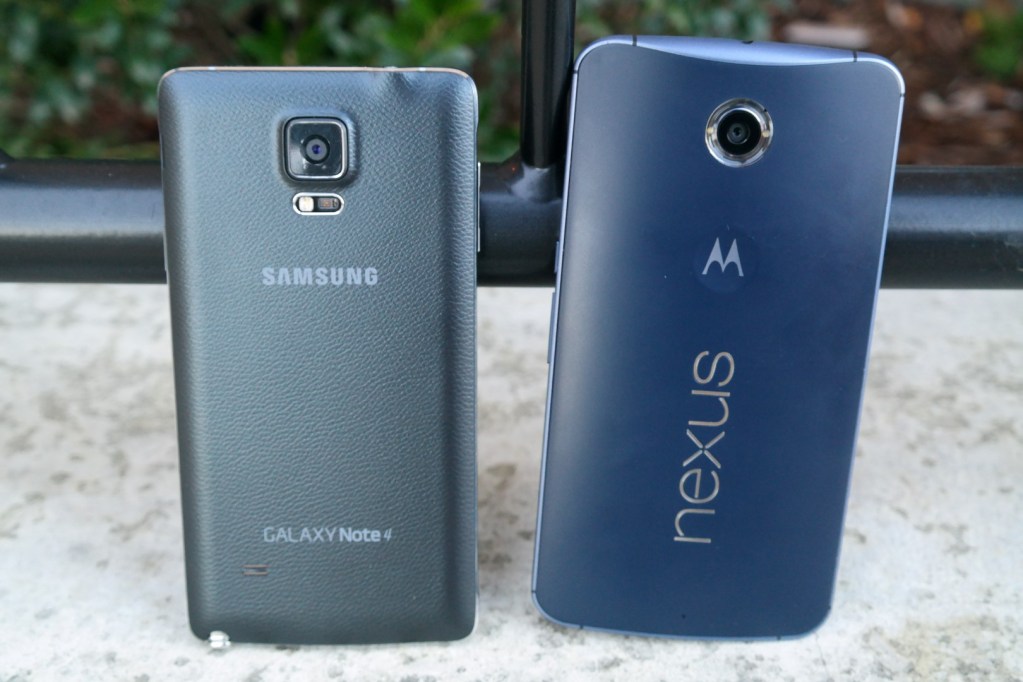 Battery life wise I felt the Note 4 was running circles around the Nexus 6’s life even though they have the same battery. Also the Galaxy Note 4 has great battery saving options to help you minimize usage as much as possible. One thing I did that seemed to help the battery of the Nexus 6 tremendously was to turn off Active Notifications. The constant flicking on and off of the screen seem to be draining battery at least to me anyway. Whats great about both is they have Rapid Charging when used with their included chargers.  You can easily get at least 50% more battery life in about 30 minutes and then get fully charged within the hour. Mind you I did this more than using battery packs while having them in Las Vegas for CES a few weeks back.
Display wise the Nexus 6 has a 6” AMOLED screen where the Note 4’s display is 5.7” and is SUPER AMOLED. Both screens look gorgeous and while the Note 4’s display can get brighter than most phones out there the Nexus 6 does produce slightly more realistic colors. The Note 4’s screen has more vivid coloring so it depends what you are looking for. 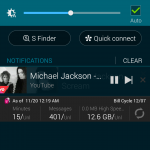 A huge difference between the two is what OS they are running. The Samsung Galaxy Note 4 is running Android 4.4 aka Kit Kat while Google’s Nexus 6 is running Android 5.0 aka Lollipop. While you may say “oh 5.0 has to be better right out the box” it really goes by your taste of style. Samsung is known for its TouchWiz OS which has just about every feature imaginable that you could need. Hand gestures, Multi Windows, Ultra Battery Saving, Download Boosters (T-Mobile Only) and the list goes on. If you want something in a smartphone the Galaxy Note 4 most likely has it. This works for some and it’s great. Unfortunately this can make their OS run slow or lag at times no much how much RAM is built-in. 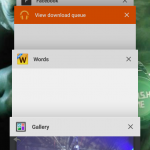 On the side is the Nexus 6 which runs smoother than any smartphone I have ever used. It’s a beast and it does multitasking like no other. Gaming, watching movies, browsing the net, you name it and it eats it up. It’s actually for me to put it down. Only problem with Nexus 6 having Lollipop (5.0) is there is virtually no other smartphones with it. This makes it standout by itself and developers aren’t rushing out there to make their apps compatible or hardware product makers haven’t made some of their stuff work with it either(hence SanDisk Dual Drive).

This area is one of the main reasons I can’t seem to put down the Galaxy Note 4. Its 16MP camera with 4K recording is one of the best on the market and takes great images like no other smartphones. Samsung has already had good software when it comes to their options and it shows with the Note 4. Also what’s great about the Note 4 is the front camera is 3.7MP and it records 2K video. Sure there are better “Selfie” cameras out there but this one is just as good.
The Nexus 6 on the other hand has vastly improved their camera over their predecessor the Nexus 5 and can take nice pictures giving the correct lighting and a couple of trial and error times snapping a photo with its 13MP lens. It also does shoot 4K like the Note 4 and while their video looks better I like how the Note 4 is able to pick up audio, especially at a loud event such as a concert.
While the Note 4 easily takes the camera crowd, the Nexus 6 isn’t the worst out there and can take some sweet shots if utilized correctly. If anything, its HDR+ mode can make those OK shots look slightly better.

The Nexus 6 runs smooth as hell with its Android 5.0 software and is a great experience while the Galaxy Note 4 has just about everything you need in a smartphone even though its OS is tugging it down.
Both phones are available or should I say works on all carriers. The Samsung Galaxy Note 4 is on all four major carriers while the Nexus 6 is on all but Verizon. You can purchase an unlocked Nexus 6 device though and pop a Verizon 4G LTE sim as that’s what’s been in my device for the past few months now. You can’t go wrong with both smartphones as they each bring something unique to the table.