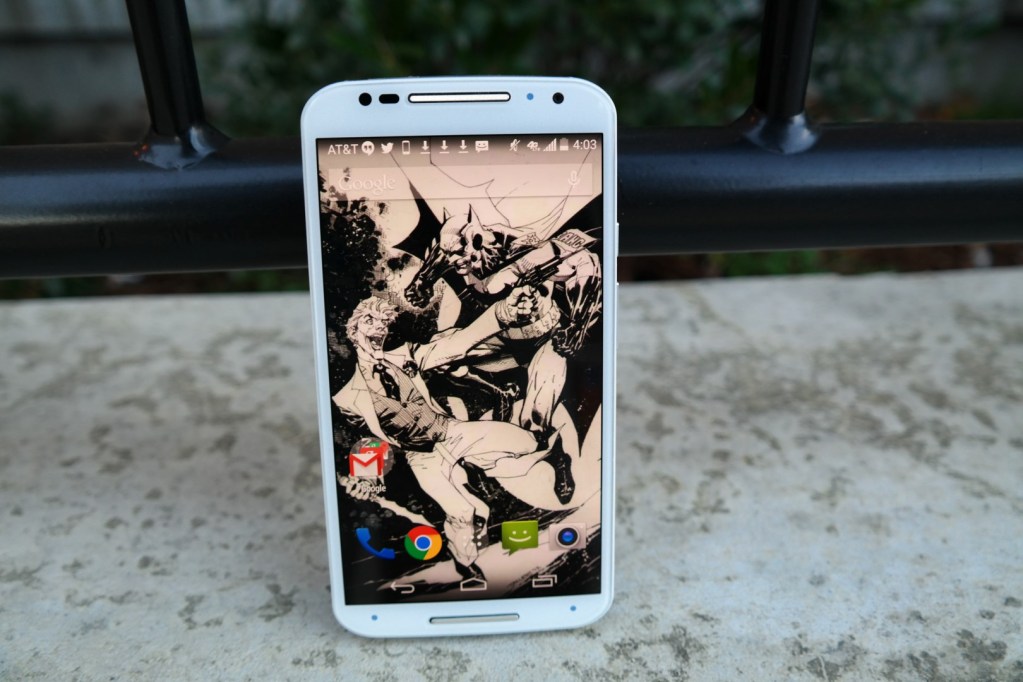 A sleeper hit smartphone that we considered last year was the Moto X. It came out the blue from Motorola and at the time people thought it was going to be the Nexus 5(which eventually came months later). The Moto X was a gem as it had some great features such as the Moto Display Notifications, its battery life was great with its multiple processors and also it had not crept into 5?sized phone territory so it felt good in the hand. Close to a year later Motorola has revised its Moto X line still keeping it with the same name and similar look. Is the 2014 version of the Moto X worth looking into? 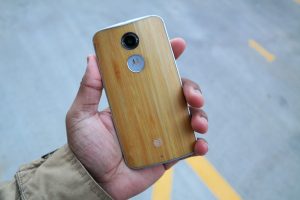 When you get into style of the Moto X it can vary based on which carrier you get it from or you decide to take a trip to MotoMaker and customize one yourself. The device I received from AT&T has a smooth natural wood finish and looks like it too. Also on the back is still a Motorola emblem like its predecessor but it’s more redefined with all metal and gives a bit more room for resting of the finger. All around the borders of the phone is also a metallic band. Flip it over and you have a speaker at the bottom and what could be considered one at the top but it’s just for call listening. Motorola really took the next step in continuing the Moto X brand and it shows with excellent build quality.
Even though it’s slightly larger than its predecessor the Moto X 2014 model still feels good in the hand thanks to that finger rest in the back and its slightly curved body. I still found it easy to achieve one hand typing and navigation on it as well. 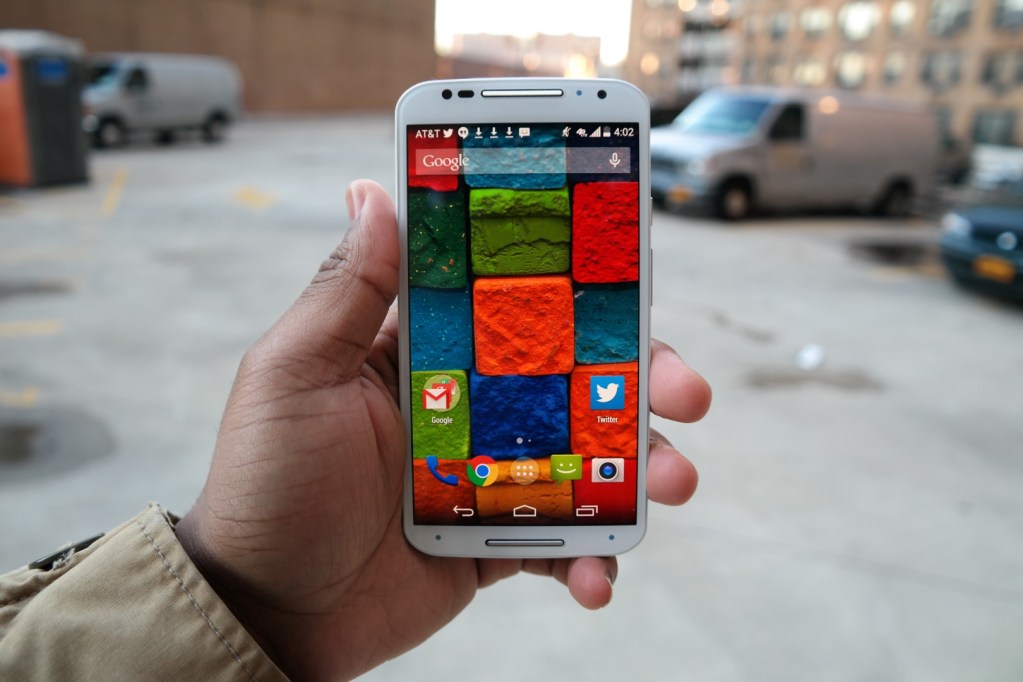 A factor into the original Moto X having stellar battery life was that it had a 4.7″ 720p screen. Motorola has gone ahead with a 1080p 5.2″ display upgrade this time around. Icons look sharper and images look much better than its predecessor. Of course you have some of these new devices with 2K resolutions this definitely helps the Moto X 2014 last a bit longer then some of its competitors.

So with a newer display also comes some newer hardware as well. The Moto X 2014 is using a Quad Core Snapdragon 801 chip, 2GB RAM, Adreno 330 GPU and comes in storage sizes of 16 or 32GB. Unfortunately there isn’t any microSD expansion so I think you may want to opt for that 32GB format. Its battery size is 2300mAh but I would love to see maybe 2600mAh for such a newer smartphone. Also going back to the mono speaker on the front, it sounds nice while not groundbreaking like HTC’s BoomSound speakers it’s still better than having a speaker on the back.
Navigating the Moto X through various tasks has been good and haven’t noticed much lag while doing so. Whether doing lengthy chats on Hangouts or playing Candy Soda Saga (don’t judge me), the device has held its own pretty good.
AT&T’s network has been good whether you are making calls or using the data services. Being in New York City it’s hard to find dead areas for the carrier unless I haven’t ventured into them thankfully. 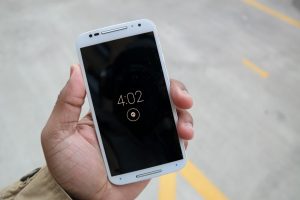 Running on the Moto X 2014 is Kitkat aka Android 4.4.4. Motorola/Google have announced they are pushing out 5.0(Lollipop) out for the Moto X 2014 but the wait is still happening on AT&T’s model for now. For now Kitkit runs fine on the Moto X and as usual Motorola’s OS is just as close to Google’s pure OS as you can get from a manufacturer. Motorola does have its great features such as Assist, Actions, Voice and Display which can easily be toggled on or off. I have always been a fan of Moto’s Active Display which will flash a black and white screen when I get a notification. Its voice controls are great too and like that you can change the voice launch option to whatever you like then the always used “Ok Google”.

The camera on the original Moto X wasn’t all that fantastic and it’s gotten significantly better on the 2014 model. It uses a 13MP shooter on the back with dual LED flash with the front has 2MP. Pictures comes out ok and can look grainy at times. You really need good lightning and I say it works better in a bright outdoors setting. Its camera options are pretty basic and use a ring carousel which has actually froze on me a couple of times. It still has one of my favorite features to activate the camera which is a quick twist of the wrist. It is ok for the occasional picture or video but I wouldn’t depend on it as much as it’s not one of its strong suits.
Here are some video and pictures and you be the judge for yourself. 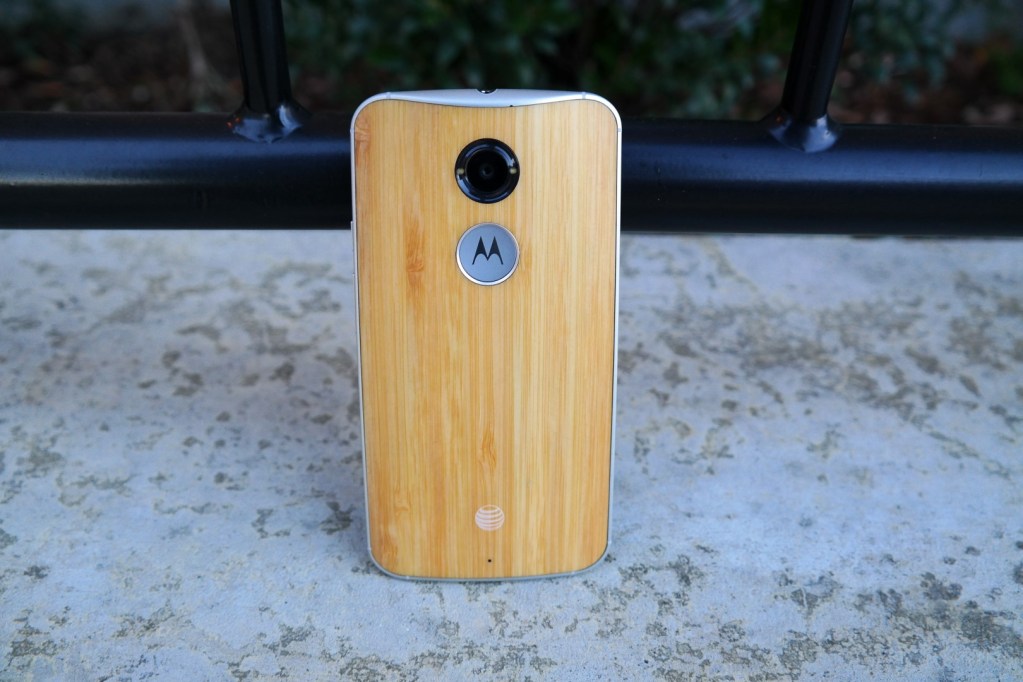