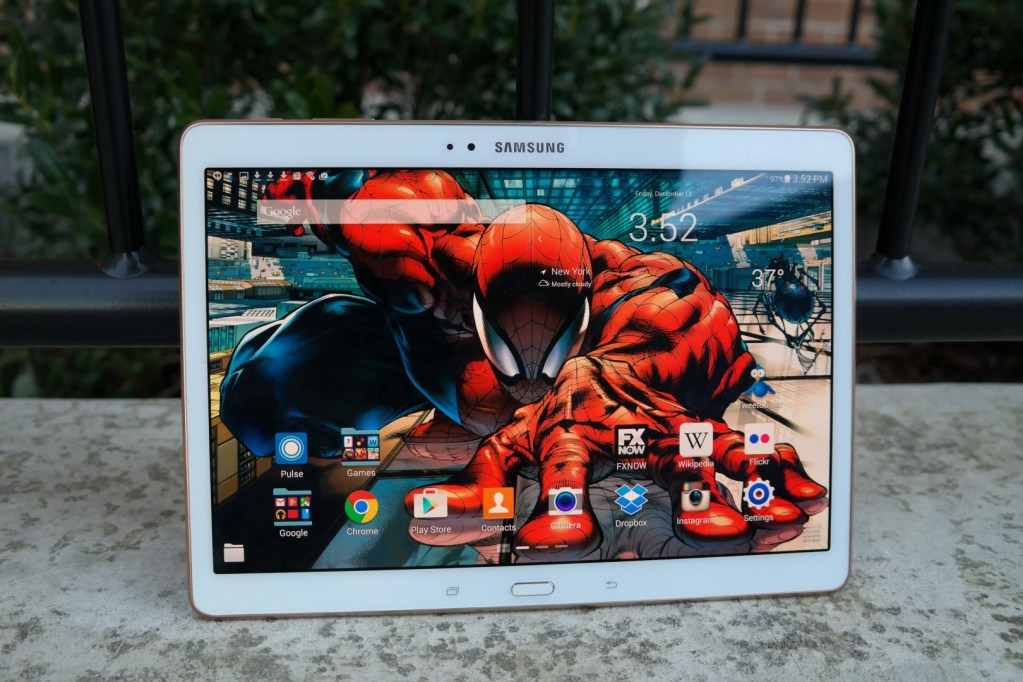 What I consider to be one of Samsung’s biggest categories in tech would have to be their tablet line. They have made it a point to have a tablet dedicated to each type of user whether it’s the Note, Tab, Pro and now the Samsung Galaxy Tab S. The Galaxy Tab S is the newest flagship in their range of tablets and with its eye-popping resolution and thin body it might be able to get the title of one of their best as well. The Galaxy Tab S is for the user that wants vivid colors and enjoys those visuals with everything from entertainment like movie viewing or reading some of their favorite articles and magazines. But with all this is the Galaxy Tab S worth the price tag and destined to be your new eye popping centerpiece?

The Galaxy Tab S is one of Samsung’s thinnest (0.26”) and lightest (1lb) tablets they have ever done. It has a metallic gold trim that circles the whole device and the back is dimpled like the Samsung Galaxy S5 or what some were calling the “band-aid” look. While staying on the back you will notice on the bottom there is two circles which is for attaching peripherals such as keyboard docks and covers and so forth. Near the top is an 8MP camera with LED Flash and the SAMSUNG name is embedded in gold. 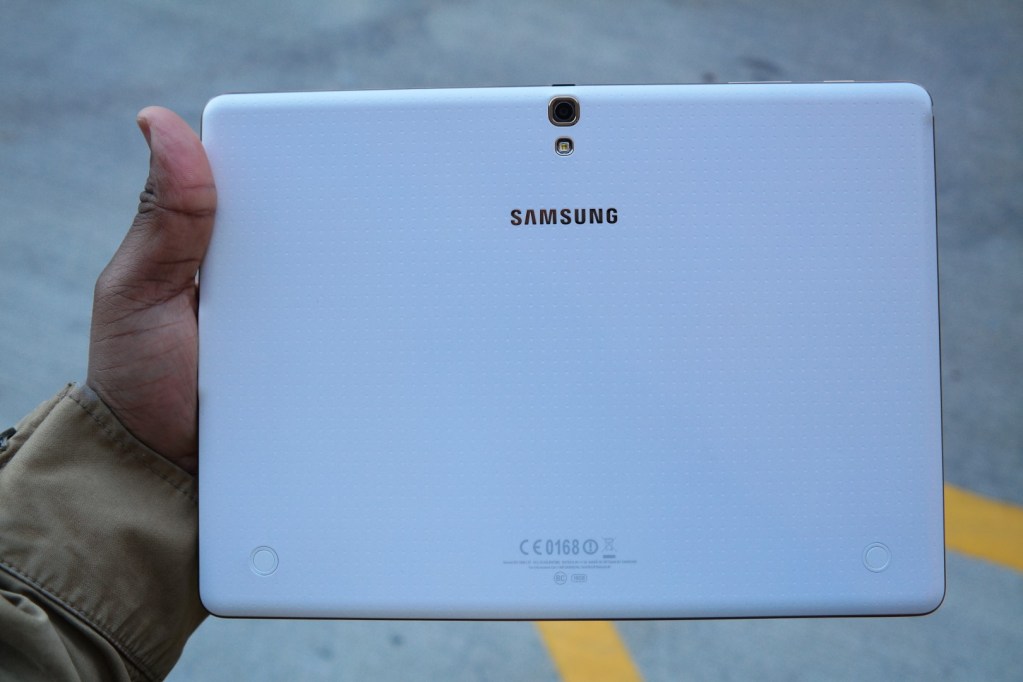 Going back to that gold trim that goes around the Tab S, there is audio speakers on each side which sound pretty good, headphone jack, microSD slot for further storage and a microUSB port. If you like using the tablet for TV controlling you can use the IR blaster as well. The Tab S has a nice clean design but then again it does still remind you of all the other Samsung tablets it mirrors itself from.

The Simple Cover for the Tab S is actually how its name sounds. Its slim, thin and feels good when attached to the Galaxy Tab S. It attached via a snap on method as the Tab S has notches on the bottom for accessories. It awakens the tablet and puts in sleep mode when closed. While it doesn’t do much to protect the back your main concern is most likely the display anyway. The case itself feels great though and think it accompanies the Tab S nicely. 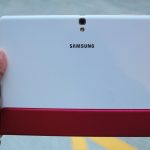 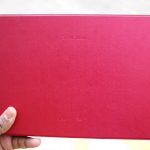 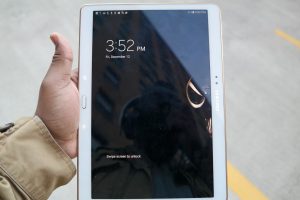 The Tab S’ calling card is its SUPER AMOLED display. Its 1600 x 2560 which equals out to a 2K resolution. What’s great about the display is like the Note 4 has Adapt Display which will adjust itself to your surroundings as far as lighting is concerned. Other than that there isn’t much else to it but it looks gorgeous and you want to find some content that can take fully advantage of it. Mostly what I watched was in 1080p but you need something that will definitely make it “pop” with colors. One app you might want to check out is PaperGarden. It’s dedicated to the vivid visuals of the Tab S and looks awesome. There are some magazines like Vogue, GQ, Men’s Health and others that you can take advantage of some free issues on to get accustomed to it.

There is a ton of power baked into the hardware of the Galaxy Tab S. For instance you have an Exynos 5 Octa processor. This consists of a 1.9 GHz Quad core and 1.3 GHz Quad core chip which has one taking care of the heavy lifting while the other takes care of the small stuff. Also to assist with that is 3GB RAM and 16GB storage (which can be expanded with microSD cards). I have navigated through various apps and watched video on it and didn’t really experience any slowdown or lag. Its 7,900mAh battery is great in providing a long time of usage with the Tab S. 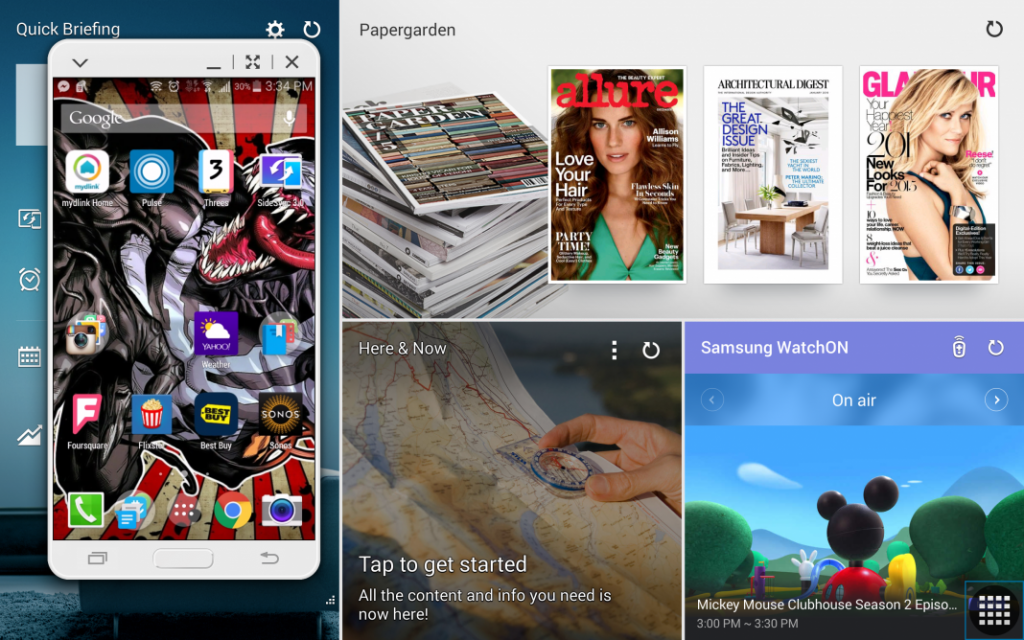 Running Android OS is Kit Kat 4.4.2 but hopefully will get upgrades to Lollipop 5.0 which we haven’t heard yet. It does of course have TouchWiz but doesn’t seem to hinder the experience and feels rather light this time. Magazine UX sits off to the side and when I mean side swap over to the far left and there it is. It’s nice to be able to access some apps such as PaperGarden or WatchOn and can be achieved easily with the side menu of the UX.
What I love using on the Tab S is SideSync 3.0. If you own a Samsung device like the Galaxy Note 4, you can share and control your screen right on the Tab S. Whether you are messaging, texting or even making a call. It all works. Just make sure your smartphone is running Android 4.4 KitKat. It’s a nice option to have if you are heavy on the Tab S or maybe you just need to charge your smartphone.

As stated earlier it does have an 8MP camera on the back with LED flash and 2MP on the front. I never been one for taking a tablet out in public to shoot pictures but if you do it does snap decent pictures which you can check below. Also video recording looks nice on it too.

Using the Galaxy Tab S, I actually enjoyed it more than I expected. The display looks great, response time is nice and its battery life is impressive. Dual speakers on the sides make it more useful as a media consumption device. Adding optional cases also feels like you have to be cautious snapping them in and out too. For the pricing starting at $499.99 it would have been nice for them to add some more internal storage even though you can still expand it with microSD. If that’s too high you can always opt for the 8.4” version that’s about $100 less unless you need all the screen real estate.