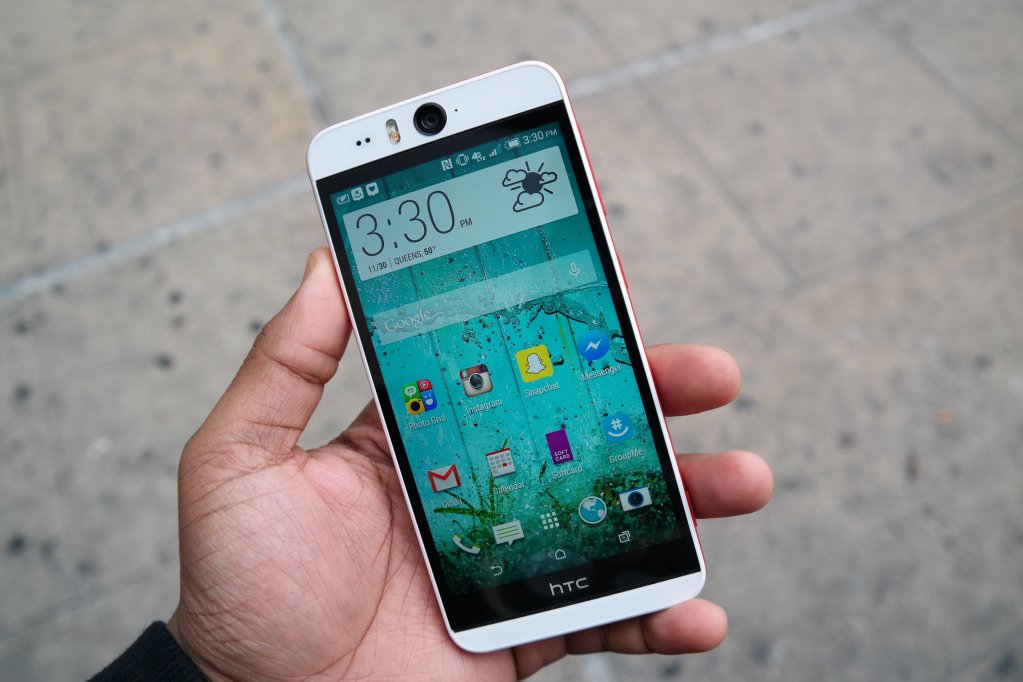 HTC has been pretty busy this year in coming out with an array of smartphones. The flagship model was the HTC One M8 which garnered rave reviews from us here at G Style and even spawned variations of itself with the Harman Kardon edition and then the HTC One M8 for Windows which was a pleasant surprise to see that model added to what was being considered a Nokia Lumia world for Windows devices. Even though all these were well received one complaint that some (including myself) have is about the camera. Even though it used a UltraPixel camera it was still 4MP and that pales in comparison to other devices that are 13MP and up with some pushing into the 20s. HTC looked to try to remedy that issue with the HTC Desire EYE. It’s fully dedicated to those that want to take selfies and just like to take pictures in general with its Dual Cameras each sporting 13MP and with LED flash might I add. But besides the camera is the Desire EYE more than just a better selfie shooter? 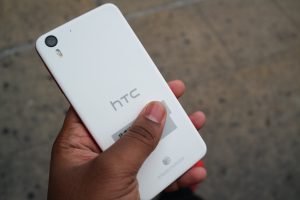 Since I been so used to reviewing HTC One M8s this year the Desire EYE definitely brings a different feel. Its body is all plastic and has a two toned color. This one has a mostly white body with a reddish/orange trim around it. Since it’s all plastic it has a lighter feel then the M8 also. It doesn’t feel bad in the hand though besides the fact you can barely grasp the buttons such as the power and volume rocker. On the other side is slots for nanoSIM and microSD which you can actually pull out with your nails if long enough. I like this option as I don’t have to fish around for sim card openers anymore. On the top is a headphone jack and both is microUSB port. The Desire EYE doesn’t feel like a cheap phone but I wished its buttons were a bit more fleshed out. At least its graded IPX7 which has it as dustproof and water-resistant up to 1M. I did have it out in the rain at times and it’s still good as new. 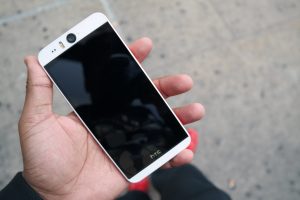 Desire EYE’s bright display is 5.2” and is 1080p with 424 ppi. It is pretty vibrant and icons look pretty sharp. Watching movies and games definitely look good while complimenting its BoomSound dual front speakers which sound just as great. You wont even know they are there as they mesh with the display screen but they are definitely sitting nicely. Just like its M8 siblings you also have Motion Controls which allow you to swipe in different directions while the screen is off to provide different activities.

Spec wise it’s just about identical to the M8 with it having a Qualcomm Snapdragon 801 chip, Adrenos 330 GPU, 2GB RAM, but just 16GB of storage. Thankfully the microSD expansion capabilities are there and you can get up to 128GB of additional space. Battery wise you get 2400mAh which isn’t high but can help you get through a day of work. If you are still a little weary there is the additional Battery Saver options which have always been kind. The Desire EYE is supposed to support rapid charging as its stated but not too sure if it does. I did charge it sometimes with the Turbo Charger from the Nexus 6 and seem to be back at full battery within an hour or so. This could also attribute to its smaller battery but that’s still good to me.

Sense 6.0 is running alongside Android KitKat 4.4.4 which I usually have no problems with using. It’s speedy, fast, and haven’t come across any lag. There is sometimes a couple more steps to getting through the options but once you get that down you are good to go. Of course being on AT&T there is the massive amounts of bloatware you may not use and you can have some fun disabling those as usual. 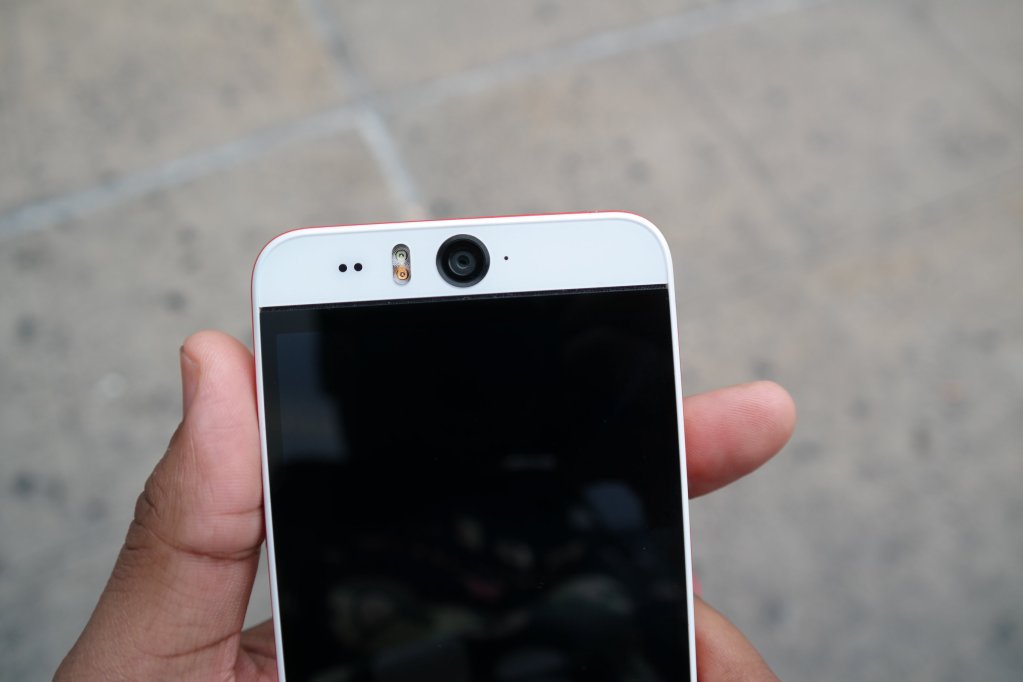 One of the main reasons you picked up the Desire EYE was for its double 13MP cameras with dual LED flash that accompany the front and back for the device. There isn’t anyone on the market with matching cameras of this rate out and it will provide awesome of the ultimate selfie user in you. I was never big on taking selfies because the cameras were always crap at least till I got to the HTC One M8 and the OnePlus One to follow. The great thing about the Desire EYE is it has a wide-angle lens so it can get you and your friends all in the shot. Video recording can be done on both angles while the back camera has a Fast HD option for better quality. If you want to simultaneously snap pictures or shoot video on both cameras you can use the Split Capture option. I think quality looks good on both shooters and you should be able to have some fun with them. What’s great too is the dedicated camera button on the side as they expect you to take a ton of shots with it.

HTC’s Desire EYE is a pretty great device and really could be considered flagship with the spec sheet and features it has behind it. No other phone is touching its dual 13MP option and it can provide some of the best selfies in the business with ease. Body wise its plastic feel is ok but would prefer premium such as the M8 but maybe we will see a combo of the two with a M9 perhaps?
HTC Desire EYE is available exclusively on AT&T.