In the original film, a Model T-800 humanoid cyborg known as a Terminator (played by Arnold Schwarzenegger) travels from 2029 to 1984 to assassinate waitress Sara Conner. Unbeknownst to Sara, she will be the mother of John Conner, the future leader of humanity in a war against the Terminators. In 2029, John Conner sends Kyle Reese to 1984 to protect his mother from this potentially disastrous event. 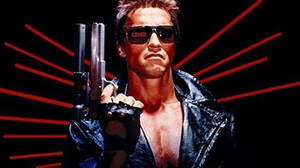 It’s been about five years since last we’ve visited the universe first created by James Cameron. When I heard there were plans on revisit, possibly reboot, I was more than skeptical. As production began and the cast and crew started coming together, I started bringing my guard down a little. “Thor: The Dark World” and “Game of Thrones” director, Alan Taylor re-teams with a Emilia Clarke (Daenerys Targaryen) as Sara Conner, Jason Clarke (“Dawn of the Planet of the Apes) plays John Conner, Jai Courtney (“A Good Day to Die Hard” and “Divergent”) plays Kyle Reese and Arnold Schwarzenegger, ‘is back’ as a Terminator but not THE Terminator.

There’s going to be a lot of time-travel jumbling, here’s a quick rundown, “Terminator: Genisys” will fit in with “Terminator” and “Terminator 2: Judgment Day.” “Terminator 3: Rise of the Machines” and “Terminator: Salvation” will have no bearing on this new entry in the series, nor will the events in, “Terminator: The Sarah Connor Chronicles”. The new film will briefly feature an 9 year old Sara Conner who is orphaned by a Terminator and raised by an older reprogrammed T-800 model (Arnold Schwarzenegger) she calls “Pops”. If you’re confused, it’s okay you won’t be alone.

Here’s the official synopsis.
The year is 2029. John Connor, leader of the resistance continues the war against the machines. At the Los Angeles offensive, John’s fears of the unknown future begin to emerge when TECOM spies reveal a new plot by SkyNet that will attack him from both fronts; past and future, and will ultimately change warfare forever.