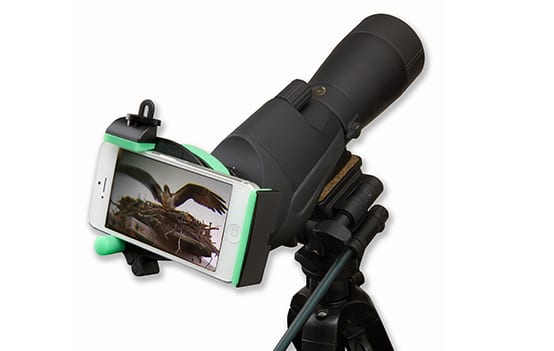 There are many out there who only use their smartphones to take photos and that’s perfectly acceptability now considering how the cameras on these devices have evolved over the years. They’ve gotten so good recently that many have replaced their old point-and-shoot cameras with them and in fact are taking even more photos because of the convenience factor. As versatile as your smartphone can be for snapping photos, it’s still limited in certain areas such as the lack of a high powered zoom or ability to focus in on very close objects. These shortcomings can be overcome with the use of specialty lenses, but usually that requires some special mount that only works for those specific lenses. What if you had a universal mount that you could use to take photos from your smartphone using a telescope, binoculars, or loupes? Well now you can with the new Carson Optical HookUpz Universal Smartphone Adapter. 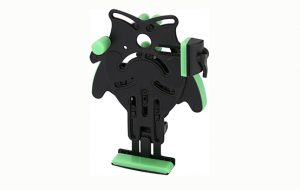 What makes the Carson HookUpz Universl Adaptor special is that it is supposed to work on any smartphone (with the exception of larger phablets) as well as optical sources like telescopes, binoculars, microscopes, and loupes for example. It’s an adapter that can be modified to fit a wide range of smartphones. For this test, I will be using it on an iPhone 5 and a Nexus 4.

The first thing you’ll notice about the HookUpz Universal Adapter is how mechanical it looks. It’s made of plastic, but has all these little levers and slides and springy hinges. It looks really daunting at first, but once you learn how to adjust it, it’s pretty easy to set up. Basically, the device is made in such a way that it will fit almost any smartphone out there (phablets don’t work sadly). My Note 3 test unit almost fits, but misses the mark by a few millimeters. The HookUpz Univeral Adaptor works perfectly with my iPhone 5 however after some adjustments. 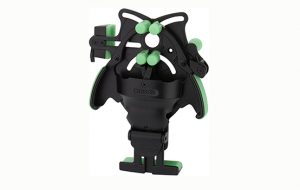 The iPhone 5 is held in place with neon green silicone bumpers that help grip the phone in the adapter while also providing protection against scratches. What’s neat about this is that I’m able to use the HookUpz Universal Adapter while still using my regular case on the iPhone 5. Once adjusted to size, your phone can be easily installed and removed by pulling back the hinged bumper.

On the back of the device, are a set of clamps that you squeeze together in order to have it fit around whatever you are using as the optical source. In my case, I tested it out on a loupe as well as on a spotting scope. Both of these have rather small diameters but the HookUpz Universal Adapter can accommodate diameters of around 55mm it seems. That means it will fit most telescopes, binoculars, microscopes, and any other optical source you might have. This makes the HookUpz Universal Adaptor very flexible and versatile allowing you to use your smartphone to photograph using a variety of different sources without the need for special adapters. 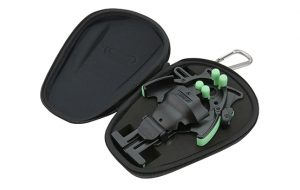 The Carson HookUpz Universal Adaptor is a very useful device if you like taking photos from odd sources. I know there are a lot of people who would enjoy taking photos from a telescope of microscopes and if that’s you, this is the perfect device. However, the HookUpz Universal Adapter is not small. It’s a fairly large device that isn’t pocketable and would have to be carried separately. In fact, it even comes with its own case that is also quite large, but helps protect the adapter from damage.

Despite its size, it does come in handy. It works perfectly with my iPhone 5, however on the Nexus 4, there were some issues. Mainly the right side bumper comes in contact with the power button on the right of the phone. It means that every time you turn on the phone, pressing down on the power button brings up the menu of whether or not you want to shut down. It’s a small issue and one that others might run into based on what smartphone they are using. For this, your experience may vary.

Other than that though, if you own an iPhone, this is the perfect adapter to get if you want to take photos from a telescope or other optical source.

The Carson HookUpz Universal Adapter isn’t for everyone. It’s for a select few who can make use of what it offers. That it offers is flexibility and versatility for those who own multiple optical viewing devices but have no way of taking photos from it. This makes that old telescope you might have more exciting as you’ll be able to share what you see with the rest of the world as a photo. Same goes for that old microscope or old set of binoculars. This adapter lets you capture exactly what you see and that’s amazing. 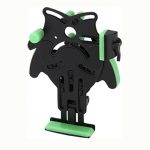 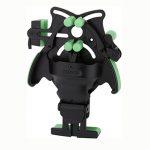 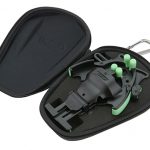 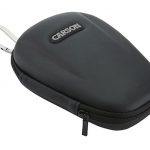 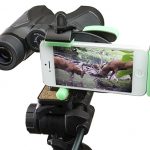 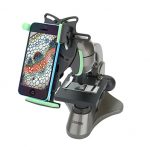 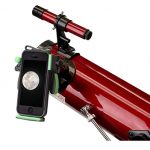 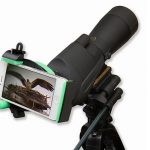