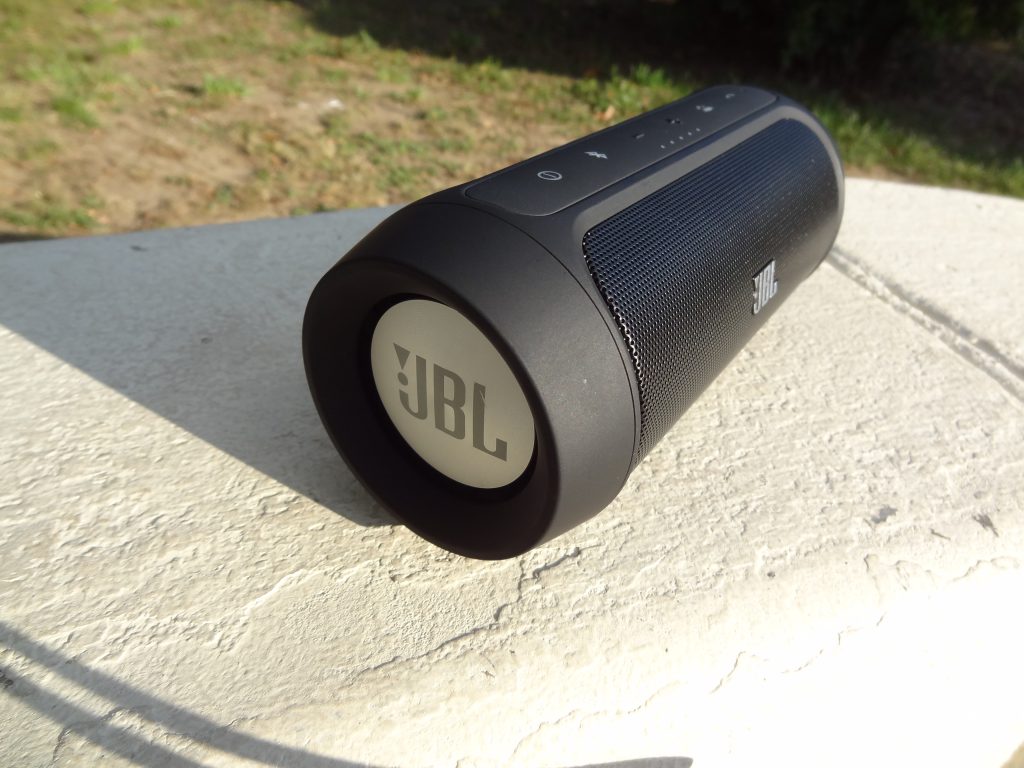 JBL is no rookie when it comes to audio and if you own any of their products then you know they pay attention in delivering the sound that you get when you listen to your favorite music. Whether it be from their headphones, soundbars, receivers and the increasingly more popular bluetooth speaker.

Over the past couple of years JBL has put forth a solid lineup of bluetooth portable speakers that include the Clip, the Flip, Flip 2 and the flagship Pulse and in the middle of that lineup was the popular Charge which has now updated to the Charge 2.

The original Charge was a solid speaker with an affordable price that gave you good sound anywhere and they didn’t deviate from that when they introduced the Charge 2. Other than some tweaking to the sound quality and a slight cosmetic change the Charge 2 is still affordable with bigger then ever sound and believe me you get a lot of boom bap for $149 bucks. It’s hard to beat.

The Charge 2 is a speaker that doesn’t sound like it looks. It’s not that its cosmetically ugly, in fact its just the opposite but looking at it after paying $149 would make you ask is it worth it? If you never knew or heard of the Charge 2 and someone gave it to you, you might have skepticism. You’d probably take it out of the box, you would feel the weight of it and give it a look over and say “no way” or “this is probably going to sound like an old school clock radio”. Nope. It doesn’t, not at all. You will like it. I was fortunate enough to have had the first Charge to play around with and I really thought that for the amount of money I spent I got a pretty good deal. My first impression when I finally got my hands on the Charge 2 was will it be the same as the Charge? Or will I get something different? The first sound test might tell me.

The Charge 2 has knock, a lot of knock and if you don’t know what I mean by knock, I mean it’s loud. Loud however can be subjective, loud can be noisy, loud can be annoying but the loud I’m referring to is the type of loud where you turn on your music and you wanna turn it up as loud as you can because it sounds good and the Charge 2 sounds really good. I’m a music head but I’m not what you would consider an audiophile, not at all. That’s a sound enthusiast in it’s most extreme form, these are people who pick apart sound and listen for little nuances that make up great sound overall or kill sound overall. It’s not a bad thing to be but most people aren’t that. They want something that doesn’t sound like, well…s–t, to put it nicely. 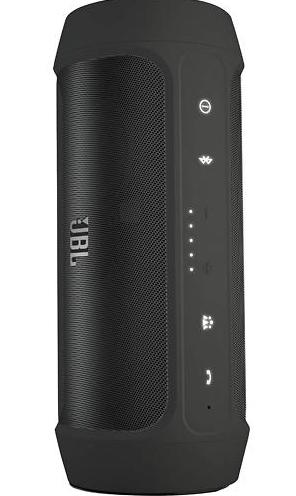 The Charge 2 has a kind of soda can cylindrical type appearance, It’s a mixture of metal and rubber put together in a nice tight package for a nice look with ruggedness and durability without being bulky and ugly-looking. The front and back ends of the Charge 2 you have your speakers for vocals and sounds and the left and right ends of the Charge 2 you have your woofers that crank out that bass and that “knock” I spoke of earlier…literally, you can feel it if you put your fingers on each end. On the top you’ve got your power button, bluetooth sync button and social sync bluetooth button which allows you to sync more than one device to the Charge 2 via bluetooth. You also have a phone speaker / mic button so you can take your phone calls as a speakerphone, volume up and down buttons with the charge and power indicator LED just beneath it. Also on the backside just below the rear speaker you have a standard usb 2.0 port and a micro usb port that you use not only to charge the device but you can also use it to charge up your smartphone or any device that can use a usb source for charging. There is also a headphone jack in the back you can use (although why you would do this is beyond me) or you can use that port to connect RCA connectors to a receiver or larger output device. You can sit it down on its base as it’s intended or you can stand it up, it’s your choice but I recommend you leave it on its base with both ends clear to get the best sound but again it’s up to you. All in all you get a lot in this little travel device for $149.

The Charge 2 has some knock as I was pretty clear about earlier and for me the sound didn’t disappoint. Was it great? No. But no bluetooth speaker I’ve used at this size really offered GREAT sound but it’s more than good enough considering the price. For $149 the Charge 2 can hold its own with any speaker in its price range and even some that are more expensive i.e Beats Pill which is $50 bucks more and didn’t offer any better sound and in fact I thought it was worse. I compared the Charge 2 to the Logitech UE Boom and some songs sounded better than others so it was kind of toss-up there, the Jawbone mini Jambox performed nicely but the Charge 2 had more of the bass I wanted when listening to hip hop and hard rock.

The sound you get is also determined by the source file and the medium to which you’re playing your music. I noticed this when doing some testing with the Charge 2. If I played a song in Spotify it sounded somewhat different from if I played the song in iTunes that was ripped from one of my old cd’s or even if I bought the music via the iTunes store. Spotify had more of a flatter sound which focused more so on the vocals and background sounds with less bass. The iTunes music sounded as if it was more bass heavy so I got a little more kick out of my music not mention I was able to tweak my sounds with the EQ in iTunes which Spotify doesn’t have (Correction, as of literally two days ago it now has EQ via an update).

For the most part I kept my Charge 2 on my desk in my home office space. I have all of my audio shared between my iMac and my Macbook pro and it’s great inside the house but what about outside? I did bring it outside a few times and again the sound didn’t disappoint, sometimes I had some distorted audio and I had to turn the sound up as high as it could go to really hear but this was something I expected being outside. Range was pretty good too, I stepped back about 20 -25 feet and I got some good sound before either the bluetooth connection broke up the audio or it just sounded crazy because I was far away. I put the Charge 2 thru the motions and it didn’t pass every test with flying colors but it did well enough for me to be satisfied.

The Charge 2 is a bargain, it’s a great little speaker for not a lot of money. You get great sound, thumping bass, portability and a small party starter. The Charge 2 can easily hold its own with the best bluetooth speakers in its price range and out of its price range. Spending more doesn’t make it better and realistically if you have to spend more, then something simple in a bluetooth speaker isn’t what you want. I happen to be enjoying my Charge 2. I still use it, I rock out to some Nas, Rozay, Queen, The Doors, Prince, whatever and it all sounds good. It has a simple design, durable and it’s easy to carry around. I mean you really can’t go wrong. Yeah, there are other choices but this isn’t a bad one. Not at all