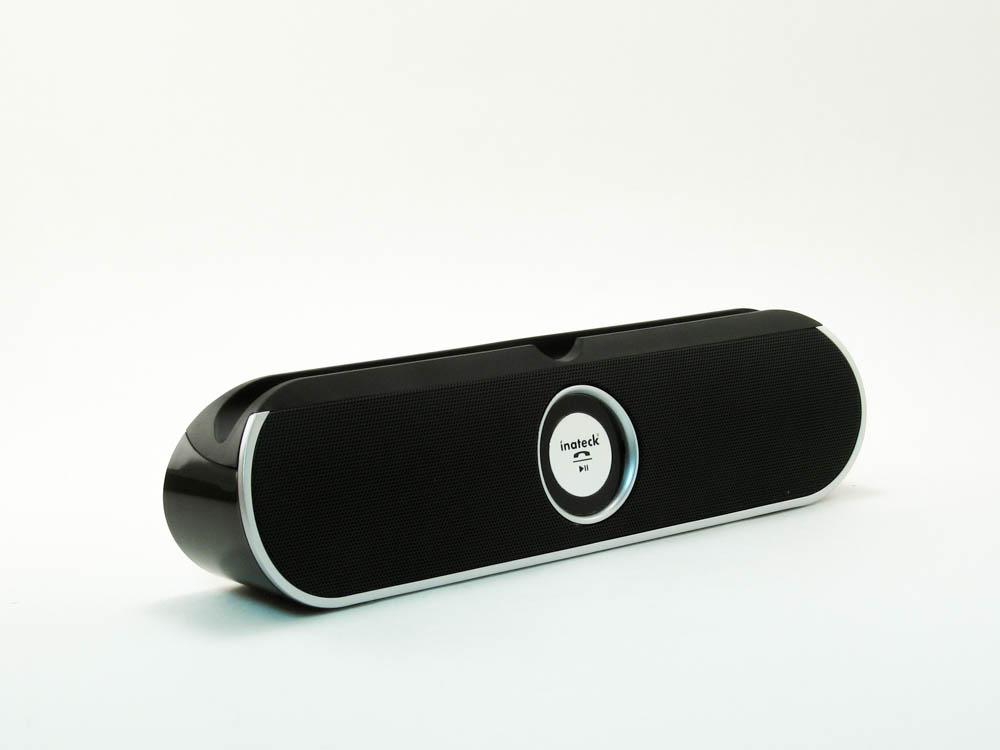 By now, you should already know about the advantages of Bluetooth speakers. They are easy to pair with your Bluetooth compatible devices, they offer freedom of movement, and they usually sound just as good as their wired counterparts. Of course that’s why we buy external speakers really because our devices’ built in speakers are usually very poor with audio output. Bluetooth speakers come in all shapes and sizes and though most do the same things, we usually end up choosing the speakers we use based on how they look. So with so many different type of speakers to choose from, how do you decide which is the right for you? That’s not an easy answer as everyone has their own unique preference. All you can do is just try them out and hope you find one you like. For example, the latest Bluetooth equipped speaker I am trying out is the Inateck BP2001. 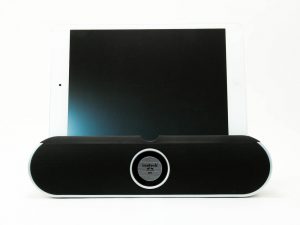 The Inateck BP2001 is different from all the other Bluetooth speakers I’ve used as it is not a brick shaped speaker or a cylinder style speaker. It’s also quite large compared to some of the more portable units but there’s a reason for that. You see, the Inateck BP2001 is more of a desktop speaker, one in which you can dock your tablet or smartphone too if you wanted. By dock, I don’t mean that you need to connect it to the speaker as such. I really mean more of a stand in which the BP2001 acts as a stand for hands free usage of your tablet or smartphone. For instance, if you wanted to watch a movie on your tablet but wanted to hear the audio on much better speakers. You would “dock” your tablet to the BP2001 on your desk and it would function as if it were one unit. Of course you can also just hold the tablet or take it around a room with you and it would still work. I just like the option of being able to use the speaker as a stand for my tablet. 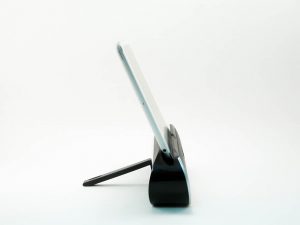 Like I said above, the Inateck BP2001 looks unlike anything I’ve reviewed in the past. This unit looks more like a tiny sound bar that you would use on a flatscreen television. It has sort of a pill shaped profile when viewing it from the front and back, but from the sides, it has more of a triangular layout so that it can rest easily on flat surfaces. The speaker drivers only face the front of unit so it’s not like some of the other speakers that direct sound in 360-degrees. This is okay though if you are using the speakers to watch a movie or play a game. This also works well if you are using it as a desktop radio with your devices. 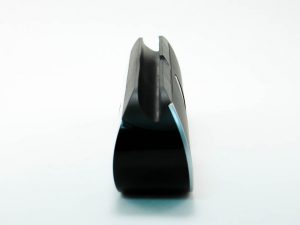 On the top of the BP2001, you’ll find a long groove that is lined in rubber that you use to rest your tablet or smartphone on. It seems like it could accommodate a wide range of devices but I only had a chance to try it with an iPad 2, iPad mini, and Samsung Galaxy Note 10.1. They all fit fine in the groove without a case on. On the iPad mini, I was able to use the case I have on it, but you’re mileage will vary with that. I just happened to have a thin case. There is a small notch on the front of the groove which looks like it is meant Apple’s home button on their i-devices when placed in portrait mode. This is good as you do not need to remove your device to use the home button. This isn’t the case however for non-Apple devices.

If you don’t have Bluetooth, the BP2001 allows you to connect through the aux jack on the back of the unit. It comes with a male/male cable that you can use for this. That means those with older MP3 players that didn’t have Bluetooth can use the BP2001 just fine.

On the back of the unit is a little kick stand that you can swing out. This is needed if you want to dock a tablet with the BP2001. If you don’t use the kickstand, the whole unit will tip over. With the kickstand out though, it is very stable and will even hold the heavier older iPads with ease.

The Inateck BP2001 makes an excellent desktop companion or nightstand companion. I use my tablet a lot and sometimes I don’t really want to hold it. I want to be able to prop it up so I can use it to watch videos. Yes I can prop it up with my case I currently use, but that still doesn’t solve the problem of the horrible audio I get from the built-in speakers. That’s where the BP2001 would become most useful. It’s basically a kick-butt tablet stand that also happens to be an awesome set of speakers for your desk. 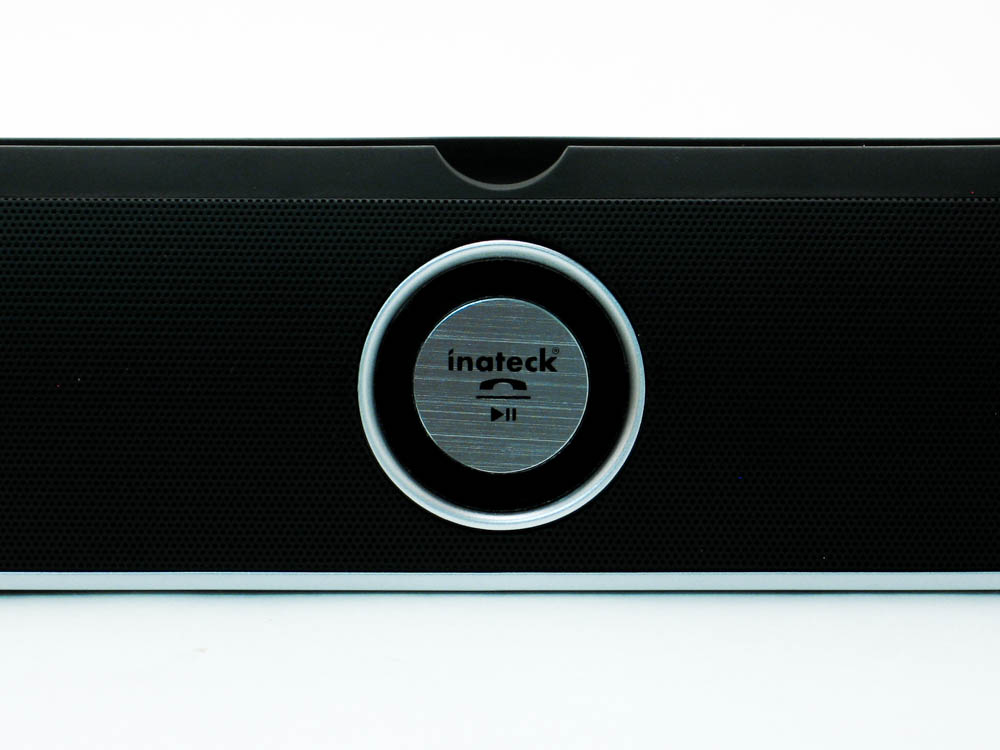 I had no problems pairing the speakers with what I have available here, which was an iPad mini, iPad 2, Samsung Note 10.1, and even my regular iPhone. They all paired quickly with no problem and they were all able to recognize the speaker.

Controls on the unit are lacking however. There is only a play/pause button right up front which also has the secondary function of picking up calls. So yes, this also functions as a speakerphone if you pair it with your smartphone. Obviously this is a bit useless though if you only use it with your iPad or other tablet, but it’s a nice feature to have.

Audio wise, the Inateck BP2001 sounds very good. When playing music and videos though it, everything is clear with not a hint of distortion, even at the loudest setting. Highs and mids are very good and bass response is decent. The audio however isn’t going to blow away audiophiles out there, but for the rest of us, they do the job well, especially when compared to your device’s built in speakers. The speakers too are pretty loud, though not the loudest I’ve used, but they are enough to fill a room.

The Inateck BP2001 is an excellent wireless speaker. It now has a permanent place on my nightstand next to my bed. I use it here because it gives me a place a dock my iPad while charging and I can use it to watch videos there while laying down. Not only that, I like listening to music before I go to bed too and with my iPad and this, it has replaced my clock radio in terms of function and it looks much better than that ever did. The BP2001 only comes in black, but it’s a very classy color that will really go with anything. The silver border that trims the speaker gives it some character, and overall, it’s a good looking speaker.

The BP2001 is also very inexpensive at around $26.00 which I would say is more than a reasonable price for Bluetooth wireless speakers of this nature. You can pick up your very own Inateck BP2001 on Inateck’s official Amazon page, here. 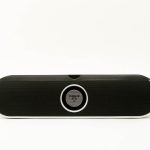 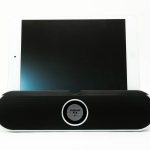 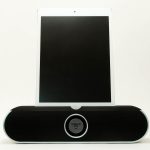 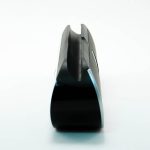 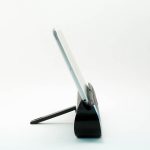 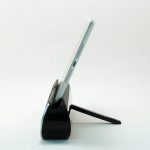 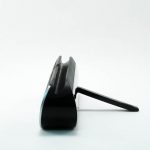 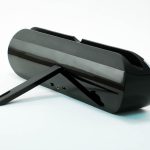 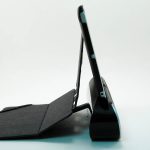 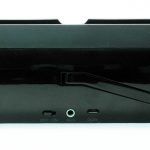 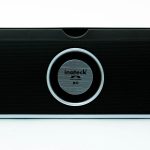 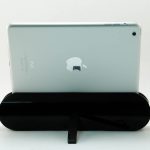 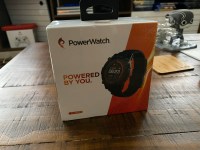