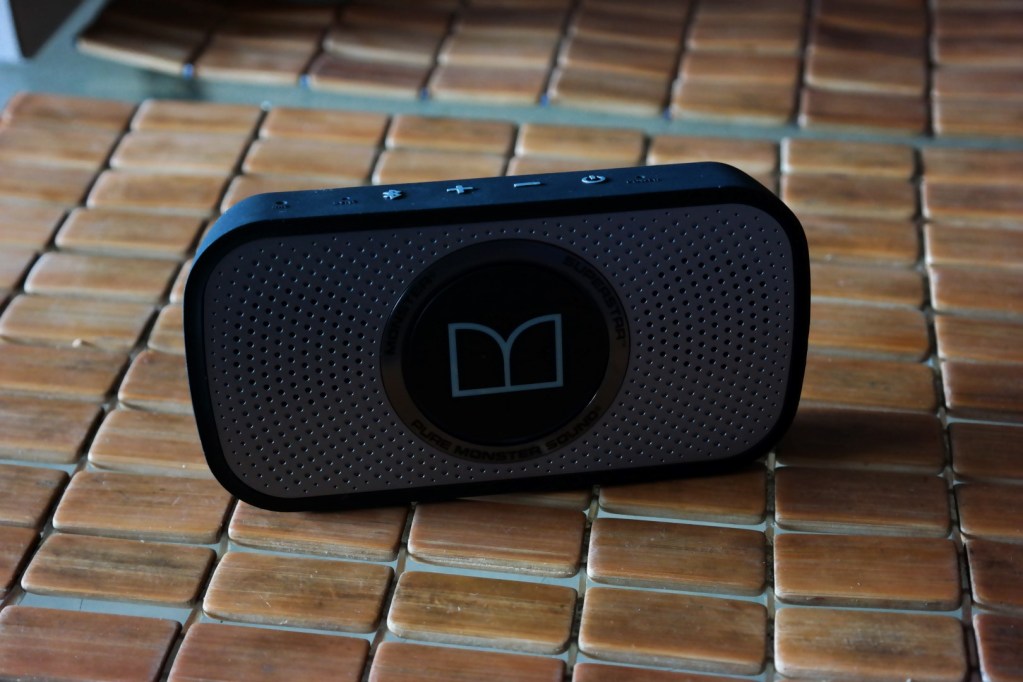 It’s definitely been an attack of the bluetooth speakers with them coming in all shapes and sizes to cater to a consumers. Some we have seen look like cassette tapes while others you are able to clip on to your bag and rock out to them accordingly. I love using them mostly when I’m in the house cleaning up or cooking or when I’m hanging with a bunch of friends and we just want to rock out. Now when taking these out I love to throw one in my bag but some of them are too big or cumbersome for carrying around. Monster has recently come out with the “Superstar” which is supposed to be extremely lightweight and compact to fit your portable needs. Its slim size is catered to be thrown anywhere from your backpack to even in your pocket and its set to pack a punch of sound in such a small device. Is the Superstar your savior for music? 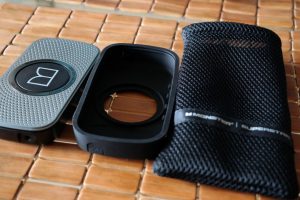 The SuperStar Speaker is compromised of a hard plastic material and is outfitted with a removable rubber silicone casing on the outside. The rubber casing helps the SuperStar sit up or even lay flat down. It does prove a good grip if you care to hold it in your hand and walk around with it or place on it on top somewhere. On the front is two speaker grills and a huge Monster insignia in the middle is placed on its bass port. As pictured it does come with a nice carrying bag and also a USB cable. The carrying bag is acoustically transparent so you can enjoy music while its tucked inside. If you have your own AC adapter(most do) to connect this to great, otherwise using the PC will take a good while. Also the Monster SuperStar is rated IPX-4 for splash resistance. 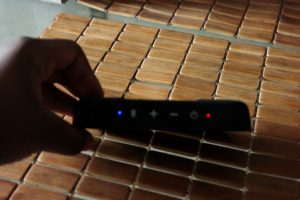 There isn’t anything groundbreaking about the SuperStar. It can be synced either via bluetooth for wireless capabilities or if you are more of the wired type is an audio jack on one of the speaker while the other speaker has a microUSB port for charging purposes. The Monster SuperStar also has a mic on the top for if you like to take some calls and don’t feel like reaching for your smartphone. I didn’t get a ton of calls while listening to the speaker but the time I used the SuperStar for a call it was perfectly fine. Person on other end could hear me as I had no problem hearing them either.

So question is this speaker a SuperStar in the sound department? Surprisingly for something this small it does pump out some great sound. It could be contributed to their Pure Monster Sound which was created to give your music a much clearer clean sound. I did test it with a bunch of EDM tracks such as Deadmau5 “I Remember(DJ Hero Mix)” and Disclosure’s “You & Me(Flume Remix)” and could feel the bass on these tracks. Of course it being a small speaker you will only feel but so much of it. Vocals have a nice amount of clarity and pumps out the SuperStar good. This thing does get loud too as I took some walks out with it on the street.

The Monster SuperStar states it’s the smallest audiophile quality Bluetooth speaker abnd it does give some impressive sound in such a small box.. Pricing could be slightly cheaper with it being $149.99(its $129.99 on Amazon) at MonsterProducts’ site. The fact its splash resistant is a plus as we tend to take these little speakers on nice adventures and they are usually destined to get wet at some point.