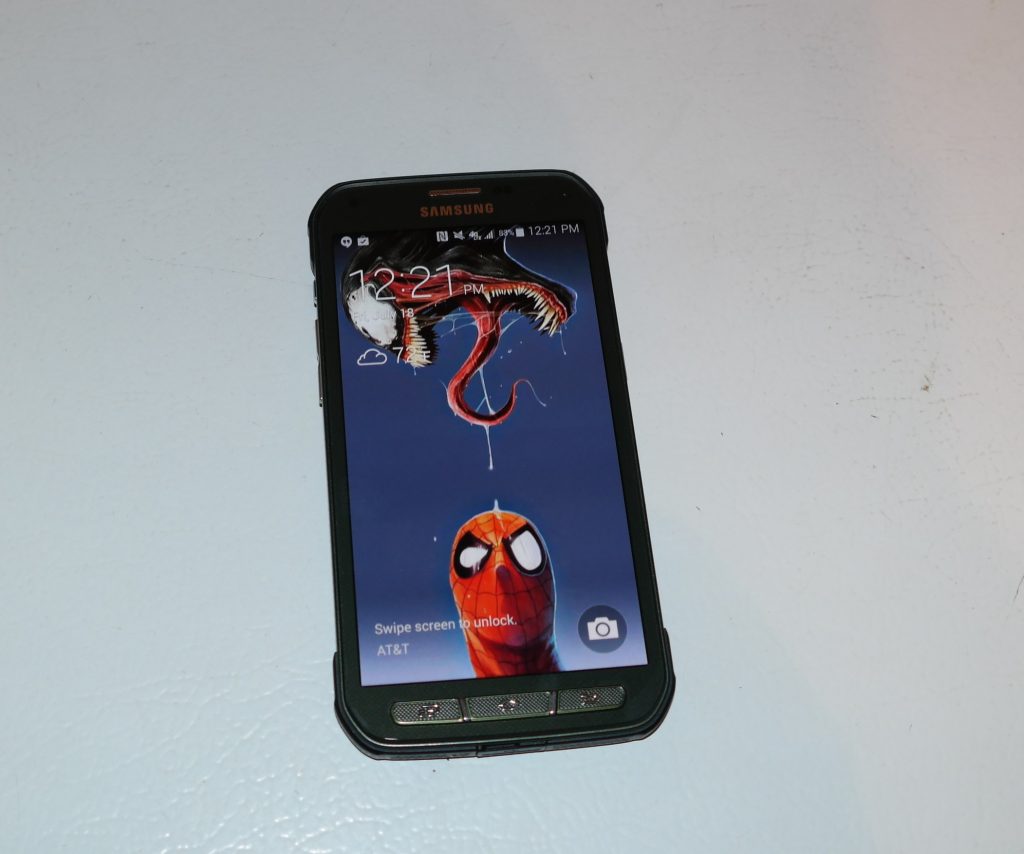 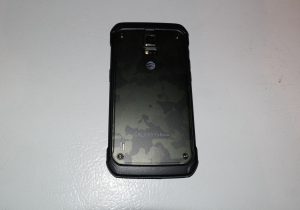 Even though the Galaxy S5 Active is supposed to be a rugged version of the Galaxy S5, it still contains an all round plastic housing. What they decided to do it makes the Galaxy S5 Active stand out a bit. Picking up the phone you will notice it has hard plastic borders on each corner that stick out which is to help protect it from drops for a decent distance. On the back you still have the plastic backing which can be easily pulled off. The “bolts” will throw you off but its all for show and is just part of the casing. You have the heart rate monitor on the back under the 16MP camera and going towards the bottom is the usb port for charging. It is missing the USB 3.0 port if you are used to that on the S5 or the Galaxy Note 3. Flip up to the top and you have a headphone jack and infrared sensor. What really makes the S5 Active stand out from the S5 is the three tactile buttons instead of the usual one button and capacitive buttons we are accustomed to. Positioned on the left side with the volume controls is an “Active” button which can give you access to the “Activity Zone” when pressed or if held down will turn on the camera.

Just like the Galaxy S5, it has a 5.1″ 1080p display with SUPER AMOLED resolution and 432ppi. Basically like I said in the Galaxy S5 review its unfortunately not 2K as we hoped but its great as for the S5 Active its great to see its matching the specs of the Galaxy S5 and not getting dumbed down like the S4 Active was last year. Video and images look sharp with its intense coloring that Samsung’s AMOLED display tend to present. 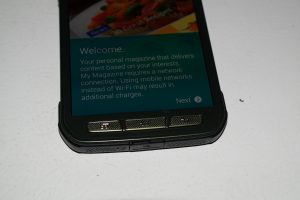 No different from the Galaxy S5, hardware specs include a Qualcomm Snapdragon 801 quad-core processor, 16GB built-in storage and 2GB RAM. Using it to perform various tasks from using Chrome to streaming media on it didn’t seem to be a problem. Battery seemed to be stable and I was able to go a little close to a day on it. The Power Saving modes are still intact and can be used on the Active S5 also.

Android 4.4.2 aka KitKat is running on the Galaxy S5 Active and has everything the S5 comes with except one thing. Based on the S5 Active using hard buttons there isn’t any fingerprint scanner. Depending on how much you may or may not of used it, it’s an omission I don’t think many will care for. That’s just me anyway. One exclusive I did notice on the S5 Active is “Activity Zone”. This app basically gives out access to the Flashlight, Stopwatch, Compass and shows a Barometer. Its nothing ground breaking and surprised it wasn’t or will be added to the S5 in the future.

The Samsung Galaxy S5 Active is exclusively only to AT&T so you can only use it with their services. Taking calls and using the data in New York City posed no issues and I tested it in Queens, Manhattan and Brooklyn. If you want to see how AT&T coverage fares in your area click here for more.

The S5 Active comes with a 16MP camera on the back and 2MP on the front. It’s fine for taking pictures and adds some vivid colors to them as well. Not the best in low light which gets a head nod to the HTC One M8 and Lumia devices. If you want to read more about the features and even check some 4K video and images you can check my Galaxy S5 Review which has identical specs.

With its rugged build, the Samsung Galaxy S5 Active could be some cases considered better than the Galaxy S5. Its identical in specs and really comes down to build quality. Also if you are willing to stay exclusive to AT&T as the phone is only on that carrier. It really comes down to your lifestyle and if you think you will go for a swim or hit some sandy dunes then the S5 Active will be great for you.