With a surprise reveal last month here in NYC, Microsoft unveiled the Surface Pro 3 where many were expecting a Surface Mini tablet of some sort. I think at this point Microsoft realizes the tablet market really has been dominated either by the Nexus, iPads or Samsung devices of the world. What Microsoft I felt wanted to accomplish with the Surface Pro 3 was give you a laptop/ultrabook or whatever you decide to call it and provide you the luxury of using it as a tablet. I did replace my main laptop and use the Surface Pro for a month as my daily driver. Now let’s dig in and see if the Surface Pro 3 could be used as a daily device and leave our current ones in the dust. 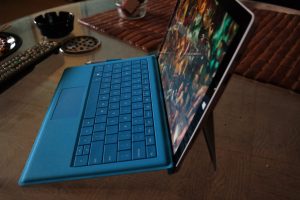 When I first got my hands on the Surface Pro 3 I was surprised how light it actually was. It is housed in Magnesium all over the back and sides and gives the Surface Pro 3 such a smooth touch and feel. If you look around the top and sides there is vents to help keep the Pro 3 and chipset cool. The Pro 3 has been detailed now with a better kickstand then before that makes it go down lower. Its great on the lap or as I seen the term coined provides better “lapability”. Microsoft has redesigned the Surface Stylus and now calls it “Surface Pen”. It actually feels like a pen in the hand and has been great for writing notes using it. With a couple of clicks on the top of the pen it opens up the OneNote app. I’d like to see the ability to change the options to what else you can open with the clicks. Also there isn’t any storage compartment or magnet for the Surface Pen on the Surface Pro 3. Only way to really secure is with the loop on the Type Cover 3

The star of the Surface Pro 3 entourage would be the Type Cover 3. Its clickable key and trackpad have been vastly improved compared to the Type Cover 2. I have typed countless articles with it and feels just as genuine as a regular keyboard. I have encountered though with the Trackpad it can get stiff or stuck depending on how you have it across your lap if its uneven. Another problem with the Track Pad is that it unfortunately doesn’t come with the Surface Pro 3 but is sorely needed to make your Surface Pro 3 more than just an ordinary tablet. And the price to pay for that isn’t cheap coming in at $129.99. 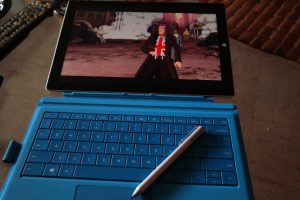 The Surface Pro 2 with its 10.6″ screen weighed closed to 2 lbs while the Surface Pro 3 has a 12″ ClearType Full HD, 2160 x 1440 display and weighs around 1.76″ and that’s even with the light Type Cover 3. I remember weighing them in each in hand and was like wow at the difference. The model we were provided has 256GB storage, 8GB RAM, and a Core i5 processor. Now storage and chipset may vary depending on what price point you decide to get your Surface Pro 3. If you want to save on storage there is a MicroSD slot underneath the kickstand. I have popped cards in and out without issue. There is one USB 3.0 port on the right side which is nice but I wish there was at least one more slot. I’m a user of wireless mice and sometimes want to use a portable hard drive or two as well. Also on that side is a Display Port. 5MP 1080p HD cameras are on the front and back and provide great clarity. I have used them various times on Skype and Hangouts and the person on the other end was surprised on how good I looked. Sound has been good with the two Dolby front facing speakers, no complaints there.

So before I got my hands on the Pro 3, I was using the Lenovo Yoga Pro 2 for a few months. The day I received this I went cold turkey and wanted to put this to the test. Realistically I can’t believe how much I have enjoyed using it. Typing on the Type Cover 3 has been great as stated besides the trackpad kind of digging in at times. I did rarely have problems where the Type Cover 3 would lose sync and I have to detach and reattach it to get it alive. 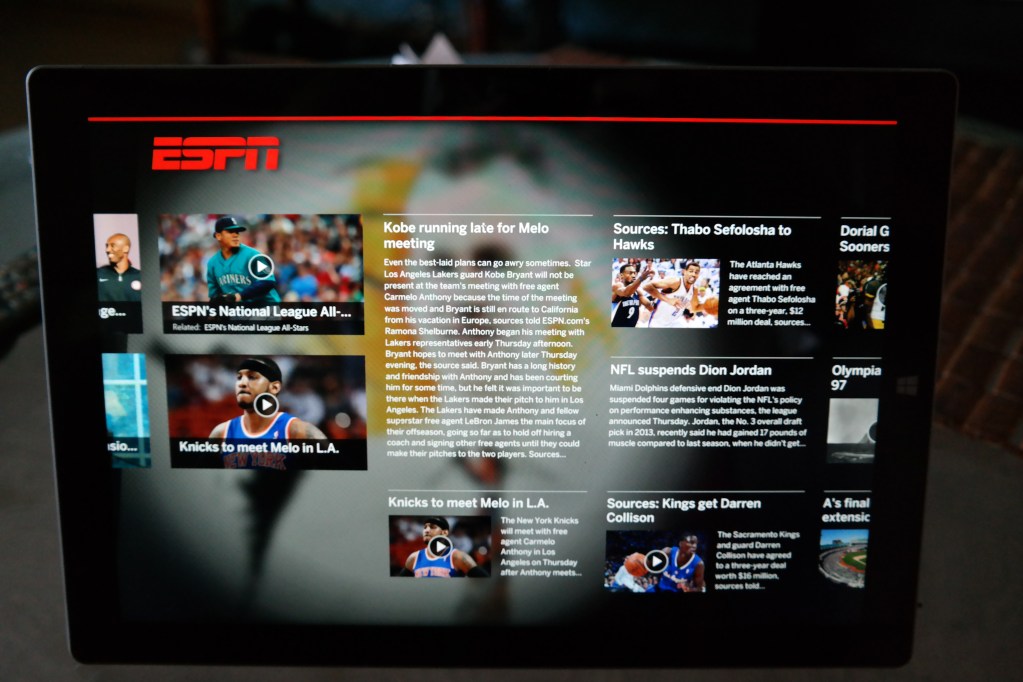 The fact the Surface Pro 3 is running full Windows Pro 8.1, I have been able to do everything on here as I would a normal PC or laptop. I have typed countless articles for the site, watched movies on Flixster such as Superman Vs. The Elite(shown in pictures), listened to music, you name it. It does say battery life goes for 9 hours but I think I have gotten close to more to 6-7 hours. I do a ton of multitasking and running various videos at once so that could help decrease the battery some.

Portability is a phenomenal part of the Surface Pro 3. It’s very light and thin and has little to no bulk. I have thrown it in numerous carry bags, laptop bags and you wouldn’t even know I had a device with such capabilities was with me. Yeah I used to carry around other laptops such as my Sony Vaio and Lenovo Yoga Pro 2 which werent heavy but that slight weight was there and also bigger, thicker bags were needed. 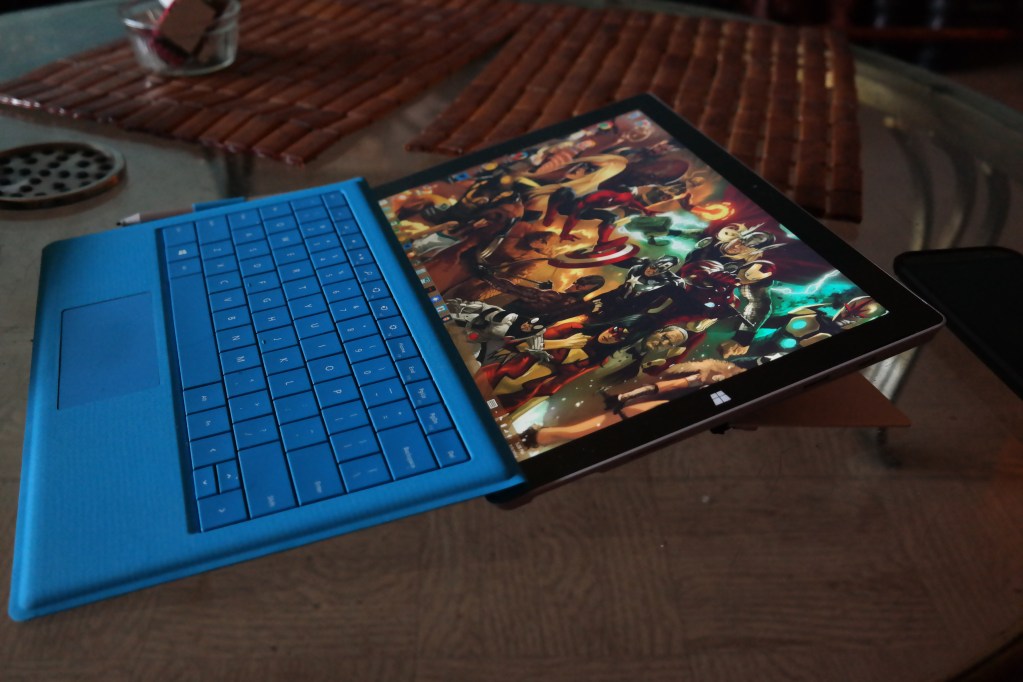 Microsoft was touting this at their event that it could replace your MacBook Air & iPad. I don’t own a MacBook Air but only used one time to time so unfortunately I couldn’t completely vouch for that. But I could see some positives such as the Surface Pro 3 being lighter even with the Type Cover 3 attached. The ability to use a touchscreen interface without having to revert to an iPad is a plus. The Surface Pro 3 could essentially take the place of your iPad/MacBook all in one swoop. But once again this is all preferences but things you may want to look at.

Has Microsoft Perfected the Hybrid?

The Surface line has gotten better with age and only looks to mature if they keep heading in the right path and if Microsoft continues to listen and innovate. The Surface Pro 3 is an awesome device and since using it I haven’t looked back at my other laptops. I call it a laptop as I use it more in that capacity. It can dig into your pockets a little with only the Intel i5 configuration out right now at $999 and $1,299. Piling on a $129.99 Type Cover 3 and you are spending $1,128.99 to $1,428.99 respectively.

If you can get your hands on the Surface Pro 3 definitely give it a spin and you’re a PC user I can’t see you not wanting to pick this bad boy up.