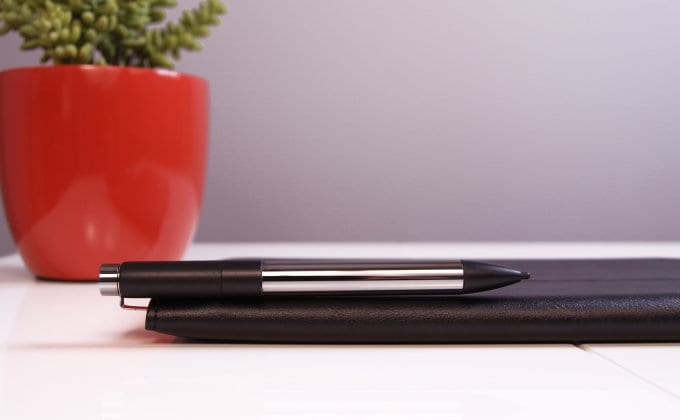 There are a few different types of styluses out there for the iPad that I’ve come across. There is the traditional rubber tipped ones that have a fat tip or the newer ones with slightly smaller tips, paint brush like tips, metal tipped ones, and Bluetooth equipped styluses that have a super small tip but required a Bluetooth connection and a compatible app for them to work.

Now there is a new type of stylus and it comes from our friends over at The Joy Factory. They were kind enough to send over their brand new Pinpoint Precision Stylus which is like nothing I’ve ever seen. It is a powered stylus that has a pen-like fine tip making inputs more accurate. It is able to achieve this without the use of Bluetooth because of built in internal circuitry that produces an electromagnetic field to mimic the size of a finger tip. That means this stylus will work with any app on your iPad. 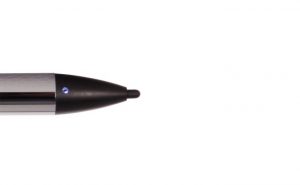 The Pinpoint Precision Stylus is a very well made and good looking stylus. The body is made of metal with some black plastic accents on it and looks and has the look and feel of an expensive ink pen. It feels good in your hands and has some weight to it so it actually feels like a real pen. It has a very small rubber tip which is good for accuracy. The only negative is that the tip doesn’t retract or come with a cap for protection.

You will need to set up the stylus first before using, but it only requires that you install an included AAAA battery. After which you just twist the top portion of the stylus to power it up. A blue light near the tip will appear letting you know that the stylus is powered up and working correctly. With it on, the Pinpoint Precision Stylus should now function like a regular fat ripper tipped stylus, but now with a much smaller tip.

I tried the new stylus with several apps I regular use to test out accuracy, mainly Noteshelf, Zen Brush, and Procreate. With the stylus powered off, it does absolutely nothing. The iPad doesn’t even register that you’re using a stylus. Turn it on however and it’s a different story. It does definitely work, though accuracy can vary based on my tests. Upon first turning on the stylus, it almost seems like it doesn’t quite work as advertised. The tracking is off a bit and it jumps around. However, after about a minute, it seems to warm itself up and everything begins to work correctly. It becomes quite accurate while sketching and taking notes and the smaller tip makes it much easier to use. I’m assuming that the device just needs a little bit of time to warm up before being fully functional. 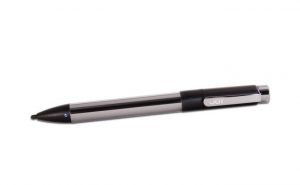 Overall, I’d say the Joy Factory Pinpoint Precision Stylus works as advertised. It’s accurate and the smaller tip makes it much easier to use. The only downside is that it does not do pressure sensitive strokes, but only Bluetooth styluses do this. This one works more like a regular stylus that most people are used too, just more precise.

If you take a lot of notes or sketch a lot on your iPad, I would recommend the Pinpoint Precision Stylus or any stylus for that matter. I just like this one because of the 2.4mm tip and the fact that you can use it with any app you already own. For the most part, it’s very accurate and does what it says it does. The only negative is that there isn’t support for pressure sensitive strokes, but then again, most people won’t even notice it’s not there. The price of this is also quite reasonable at $49.95 for a stylus of this type. Sure you can buy a regular stylus fora  fraction of that, but none have such a small tip as this one.