It works on multiple platforms like Xbox, PlayStation, PC, Mac, mobile platforms, and for the sake of this review, PlayStation 4. The H Wireless is SteelSeries’ top of the line gaming headset that features Dolby 7.1 Surround Sound, a control transmitter that features an OLED display screen, and two removable batteries for swappable power so you’ll never have to be wired in to charge.

The SteelSeries H Wireless is a two piece setup. There is a control transmitter that is plugged into your console and is used to direct all sounds to and from your wireless headset. It can be connected in a multitude of ways but for the PlayStation 4, I have it hooked up via optical cable for audio coming from the PS4, another USB cable connection to the PS4 for chat capability, and one for cable that is used to power the receiver. It’s a simple setup and is very similar to the Astro Gaming mixamp setup.

The transmitter is a little black box that is about the size of an AppleTV or Roku. It’s made of a dark, translucent plastic, most likely polycarbonate, and has a very heavy duty feel to it. This might be because the body seems like it’s carved out of a single piece of polycarbonate giving it a very unified, seamless look. It’s very slick looking and has the SteelSeries logo stamped on top. The bottom of the unit has a layer of rubber for grip and is very sturdy when sitting on any surface. I also appreciate the rubber layer because I placed this on top of the PS4 and it keeps it from scratching up the surface. 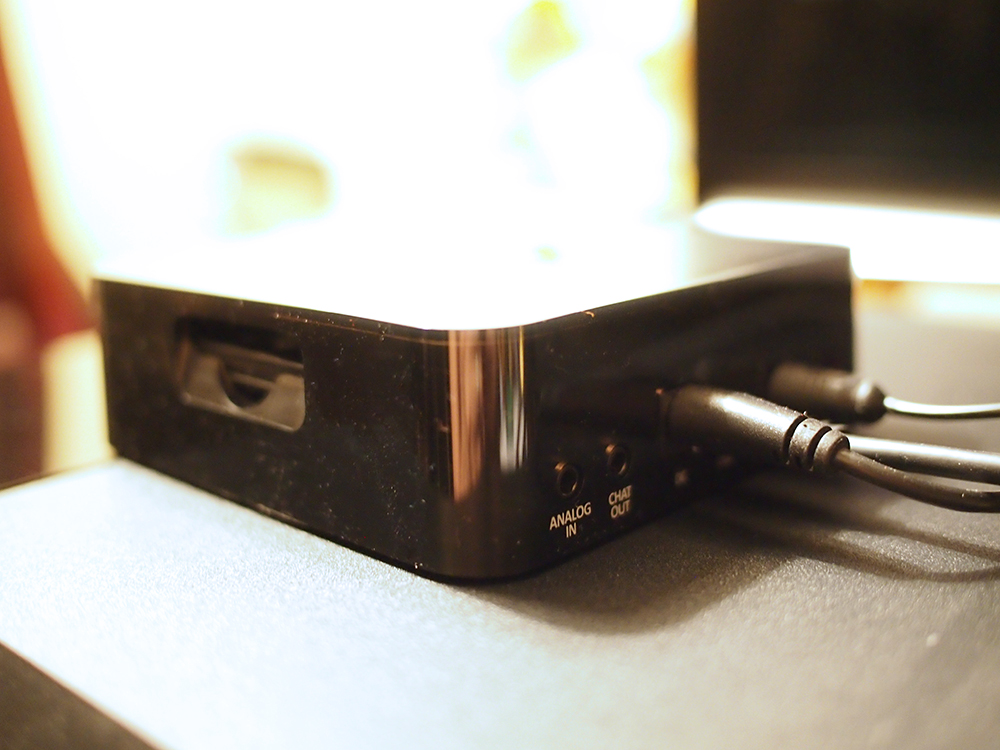 The back of the transmitter has all the inputs for connecting it up to your console and for power. On the right side of the unit, you’ll see that there is a slot for something. The slot is for charging your extra battery. Just slide one of your batteries in there and it will charge while the transmitter is in use. This is how the H Wireless headset charges. It doesn’t use cables to charge. You just pop out your depleted battery in your headset and pop in the newly charged one. The front of the the transmitter is what sets it apart from every headset I’ve ever used, including that of Astro Gaming. This is where the H Wireless really shines and sets it above and beyond every wireless headset I’ve used. The front has an OLED display which displays a wide range of options and information which I will talk about a little later in the review. Let’s just say that I was blown away by how much you can do with the receiver. There is also a button and a dial on the front that is used for navigating the various options in the menu system.

Moving on to the headset itself, the SteelSeries H Wireless headset is of an over the ear design. The headset is completely wireless which means no  wires at all dangling from your head. This is a huge plus as the last thing you want to happen while gaming is to get tangled up in a wire. The headset is made of very thick, strong plastic in a matte black finish. The top band is padded for comfort with memory foam as are the ear cups. The ear cups have a very elegant look to them and are wrapped in a leather-like material with orange stitching while the inside of the cup is also lined in an orange cloth for a splash of color. The entire band can be adjusted for size and should be able to fit most head shapes and sizes.

On the right ear, all the controls are located here. On the top of the cup is a control wheel that can be used to adjust volume, navigate the menu system on the receiver, and make selections from it as well. On the bottom is the power button for the headset that also serves double function as the mute button. Right next to that is a rubber flap. Lift the flap up and you’ll find an input for a chat cable if you’re using it on an Xbox for instance as well as a sharing port which you can use to add other headsets too so they can enjoy what you’re listening to.

On the left ear, this is where you’ll find the retractable directional mic. It can be adjusted to many different positions and also features a mute light so you can quickly tell if you have your headset on mute or not. The left ear cup also houses the removable rechargeable battery. It’s located underneath the outer plate. Just twist it, remove the cover and the battery can be swapped out quickly with another. All-in-all, I’m am very impressed with the quality and build of the Steelseries H Wireless headset and wireless receiver. The receiver is one of the best I’ve seen especially with the slick looking OLED display and the headsets are very well made, have a solid build, and are very comfortable to wear.

Once you have the transmitter hooked up, just tap the dial to turn it on and then hold down the power button on the headset to turn that on as well. It will automatically pair. You will have to run through the setup process on the transmitter in which you tell it what you will be using it on but it’s a simple process that only takes a few seconds. Once completed, you should be able to hear all game audio and chat audio through the head set. For the most part, you don’t have to mess with much on the headset. You can tap the mute button to mute your mic, the mic will appear red as a visual cue. You can also use the control wheel to quickly adjust volume. 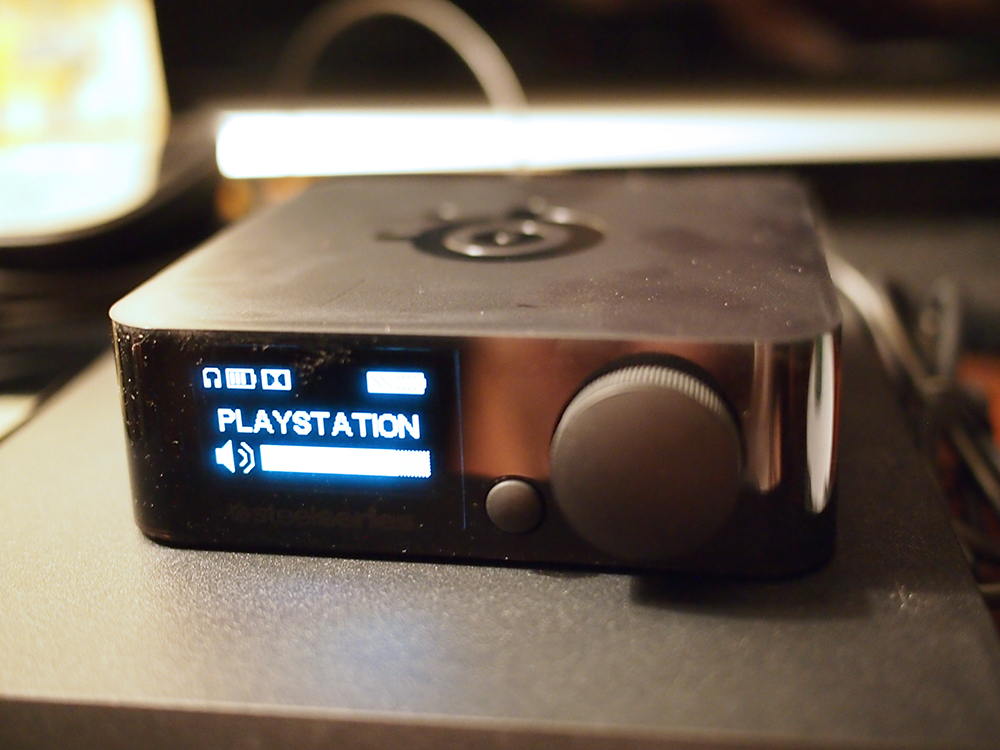 More advanced features require that you press the control wheel to switch between different settings such as the chat mixer, which allows you to individually adjust how loud you want the game audio and chat audio to be, as well as a built in EQ. The EQ has a few built in presets but you can totally customize it yourself if you want to have more control. There is also a really neat feature called LiveMix that will automatically adjust the ChatMix feature to raise volume on chat and lower on gameplay audio whenever voice communication is detected. It’s a really neat feature that so far, seems to work very well. All of this is shown on the gorgeous OLED display on the receiver while you are adjusting it. The OLED screen shows every bit of information used by the headset and it allows you to see how everything is set up at a glance. It takes the guess work out of everything.

Sound quality on the H Wireless is very good. I’m no audiophile, but when I play first person shooters, I can clearly hear where all the enemies are coming from in the game. This of course is one of the reasons why people use gaming headsets and that is to hear when enemies are sneaking up on you based on their footsteps. This is something you can’t really hear when using your TV speakers. Anyways, the sound is very clear and it does sound like I’m getting a full range of both lows and highs. I’m sure featuring Dolby 7.1 Surround Sound and utilizing Dolby Headphone, Dolby Digital, and Dolby Pro Logic IIx helps with this. Just to make things short, these are one of the best sounding headphones I’ve used on any of my consoles. Even chat audio seems to come in loud and clear with zero crackling or voices breaking up. 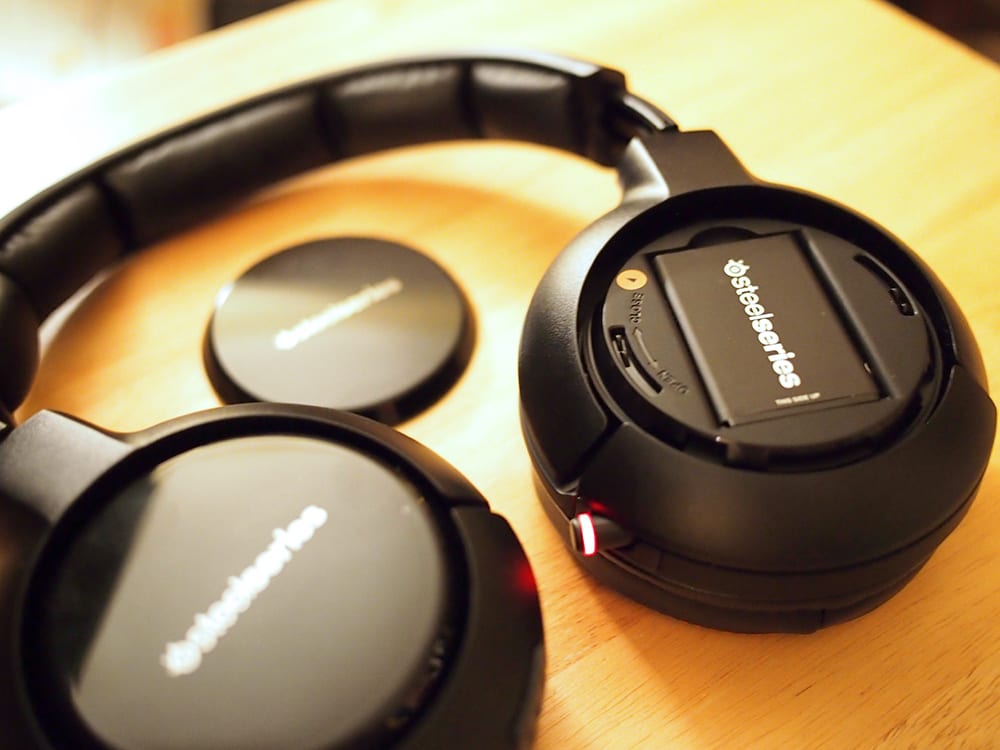 When it comes to charging your headset, the Steelseries H Wireless way of charging is by far the most convenient way of charging I have experienced with any headset. The whole setup comes with two rechargeable battery packs. One goes into your headset when in use while the other is stored inside the transmitter. There is a slot on the side of the transmitter that you push it into and it will charge while it is stored. If you notice that your headset battery is low, just twist off the cover, pop out the battery, and replace it with the freshly charged battery from your transmitter. Take the depleted battery and push that into the transmitter to start charging that one. That’s it. It literally only takes a few seconds to do. What’s really cool is that with the OLED display on the receiver, you’ll always know how much charge both batteries have in them at a glance. This is by far one of the H Wireless’s best features. 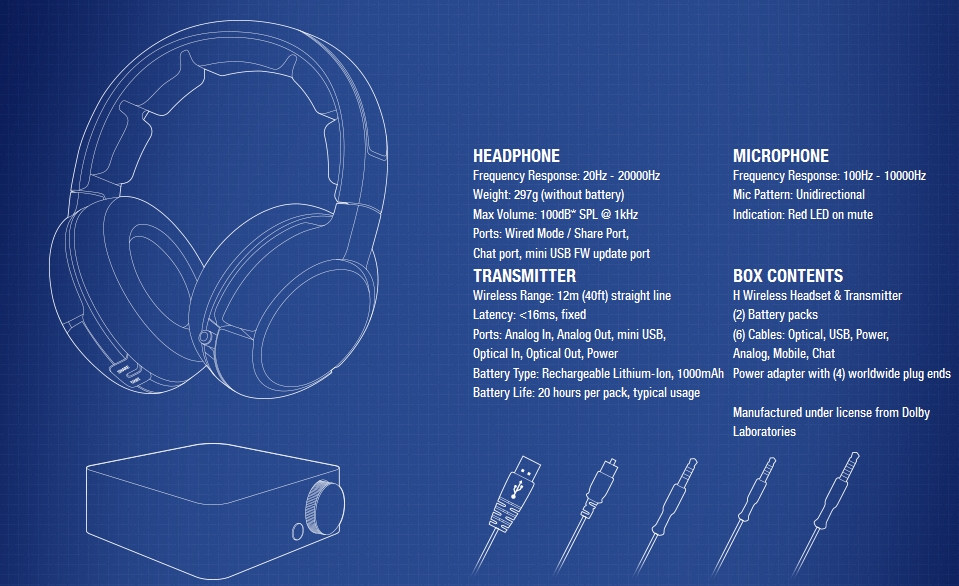 By the way, I know I’ve mainly been talking about setting this up with my PlayStation 4, but it works for a variety of different consoles and setups right out the box. As you can see from the diagram above, it includes pretty much every cable you need to hook it up to any platform and not only that, I was surprised to see that it also came with power adapters for a variety of different countries as well.

To summarize everything I said about the SteelSeries H Wireless in a few sentences, basically this is now my favorite wireless gaming headset I own. I absolutely love the build quality of both the headset and transmitter and the amount of features it has blows away everything I was using before. These are also one of the most comfortable headsets I’ve ever used especially for long sessions and I never once had to take them off because of discomfort.

My favorite thing about the whole H Wireless setup is the fact that these come with two rechargeable batteries. One battery charges while you’re using the other and swap them out whenever the battery in your headset is running low. It only takes less than a minute to swap them out meaning you’re only away from the game for very little time. Having swappable batteries also means you’ll never have to have these tethered to a wire for charging, it’s not even an option. That was one of the main problems for me with past headsets. Whenever I would need to charge them, it would mean I wouldn’t be able to use my headset while they charged. That’s not the case anymore with these.

The SteelSeries H Wireless are a bit pricey however at $299.99 retail price but you get what you pay for here (Buy them here) . You get a solidly built gaming headset with tons of built in features and a sick looking wireless transmitter with an OLED screen that you proudly want to show off. Of course as great as the whole package looks, these sound terrific as well and are one of the best sounding gaming headsets I’ve used featuring Dolby 7.1 Surround Sound utilizing  three different Dolby technologies: Dolby Headphone, Dolby Digital, and Dolby Pro Logic IIx. These are the ultimate gaming headsets for any serious gamer. Needless to say, these are my new go to gaming headsets.