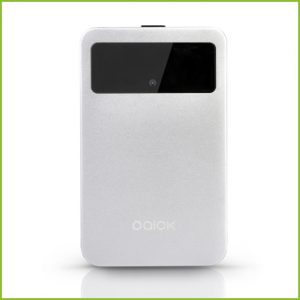 If there’s one accessory that everyone should have on them, whether in their bag or in their pocket, it’s a back up battery power bank that will recharge your phone. I don’t know how many times I’ve been out and had my phone die on me with no where to charge it up at. Because of this, I’ve started carrying around a backup battery power bank just in case, something that would charge my phone completely and maybe multiple times. Of course I didn’t want it to be super bulky either. Most of the larger power banks are heavy and bulky that I’ve seen so I was pleasantly surprised when the new Paick Noble 6000mAh Power Bank arrived to me. This is one of the slimmest power banks I have ever seen in a 6000mAh size. 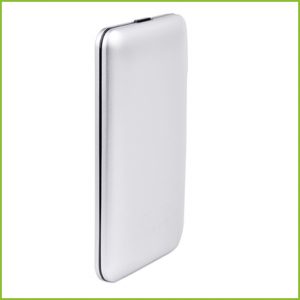 To say that the design of the Paick Noble is striking would be an understatement. This is a gorgeous, minimalistic power bank that has almost an Apple like feel to it. The outer shell is made almost entirely of aluminum alloy and is finished in a silver color not unlike what you’d see on the iPad. In fact, if I’m comparing this to an Apple product, I should really say that this almost has the same dimensions and look of an iPod Classic, just without the click wheel. It’s very sleek and very easily pocketable.

There is a small screen on the front that is used to show how much charge is left if you tap the little power icon. This screen however holds another secret to it. On the top of the Noble is a button. Push that button and the front screen pops up to reveal two hidden USB ports and one micro-USB charging port. One USB port supplies 5V-1A power while the other one supplies 5V-2.1A power. Choose the port that works best for your device. When not in use, just push the screen back down for storage and to keep the charging ports free of dust and dirt. 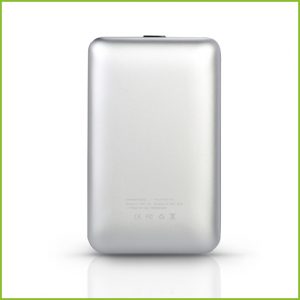 Of all the power banks I own, this one is one of the largest and thinnest. It slips as easily in a bag as it does in my pocket. I’m amazed by how small the Paick Noble actually is and how light it feels. The entire unit feels well made with its aluminum alloy body and really does have that quality feel to it.

The only negative is that it doesn’t have cables built in that store into it, but I guess that’s a small trade-off for its slim size. You’ll still have to carry extra cables with you but it’s not so bad if you choose to get the ones that can retract or at least get some shorter cables.

Overall, the Paick Noble is a great power bank with huge capacity. It has enough extra juice to keep you more than powered through an entire day and will even power more than one device with plenty of juice left to spare.