My last review of Beats by Dre didn’t fair so well and gave me migraines, but they were kind enough to send over a pair of new Beats Studio to review. Are these worth the Beats by Dre hype or a genuinely worthwhile pair of cans?
[divider][/divider] 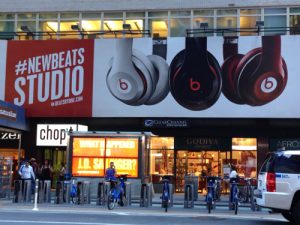 Post-Monster the world’s most famous headphone has been completely redesigned and reimagined. One major change is the New Beats Studio comes with a 20-hour rechargeable battery – no longer needing to rely on AA’s. To keep the battery from wasting away too soon there’s an auto On/Off feature that will automatically turn the headphone off when unplugged. There is a visual 5 light LED Fuel Gauge so you always know how much charge is left. For even more convenience you can charge your New Beats with a micro USB.

Visibly more streamlined then it’s predecessor it’s 13% lighter than the original there are also no visible screws classing it up a bit. The ear cups are pillow soft and the band is quite flexible accommodating different head shapes.

Hear the Music not your Neighbor 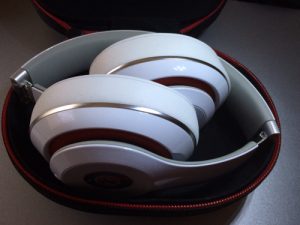 I live in Orlando which means kids vacation central so I brought my new Beats Studio along with me on my trip to CES to see how the ANC held up against a plane full of hyper children. When listening to my music the ANC did a great job of drowning out my surroundings without me needing to disturb anyone around me.

My favorite feature has to be the stand-alone ANC mode, which automatically increases the level of noise cancellation. It works I was able to enjoy and inflight nap briefly –unfortunately there’s no feature to stop the kicking of the back of your seat.

I said before and I’ll say again no denying the Beats by Dre line is definitely beautifully crafted. The pair sent over for review are white with red trim and got a lot of attention at every airport (all 6) I was in during my trip to CES. 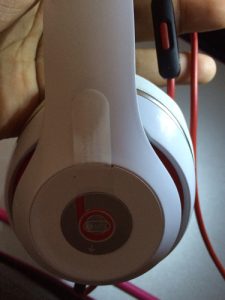 Unlike the name new Beats Studio don’t have the true to the music element you find in studio sessions but the sound is crisp. Not as bass heavy as you would imagine but it’s definitely prominent. The mids, lows and highs are nicely balanced considering how prominent the bass it yet not overbearing. As far as Noise Cancelling that feature alone makes it worth the purchase especially if you’re a frequent traveler or just someone that needs a little extra quiet.

When I think of $300 headphones I think Sennheiser Momentum – so I can’t say I’d recommend these instead. In the $199 range of headphones I definitely would. Most people that purchase Beats do it for the name, look and bass – on these ends they do not disappoint.