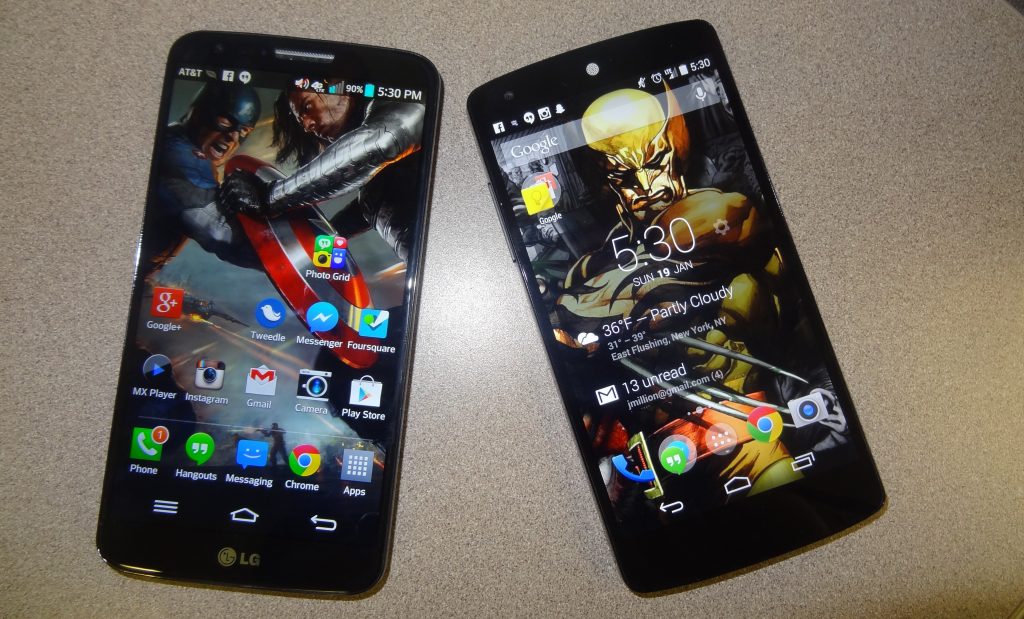 As you know CES can be crazy and hectic running from meeting to meeting,booth to booth and even to other buildings altogether trying to get the news on the latest technology and what’s going on within the industry. Being the techie I am, I used not one but two android smartphones as my drivers throughout the event from Jan.5th to Jan 10th. These two phones were made from LG and were the G2 and the Nexus 5. What better way to have a smartphone grudge match then at the biggest stage of them where everything is being used on the device. So which LG device prevailed as victor? Let’s dig in and see…

On paper, specs wise both devices share similar chipsets inside such as them both using Qualcomm Snapdragon 800 processors and neither one has the capabilities to expand the memory unless you decide to buy the larger sized model. Using both phones they breeze through tasks without any problems whatsoever and I can’t recall the last time I had any freezes or hiccups on either one. Good job on the part of LG for building such top notch running phones.

When you size them up, both devices come in near the same dimensions with the G2 at 5.2” and the Nexus 5 at 5”. Putting them side to side you won’t notice it as much. The designs are totally different with the G2 as you know having its entire buttons removed from the front and sides and slapped on the back while the N5 has volume and power buttons on the side. The only they have similar on the side is the near invisible simcard slot.

Using the G2 is an inquired taste and takes a bit getting used to but once you do I can’t see you going back. It makes it easier for taking pictures and that double tap(KnockOn) on the front screen to awaken it is always welcome.

The N5 doesn’t really have any design features that stand out besides the camera that protrudes out slightly on the back and the LG NEXUS etchings on the back.

The G2 comes in a glossy piano black color while the N5 comes in either a matte black or white smooth plastic (I prefer white) backing. If you happen to get the G2 from Verizon the button design is slightly different as well as their logo splattered across the front top. 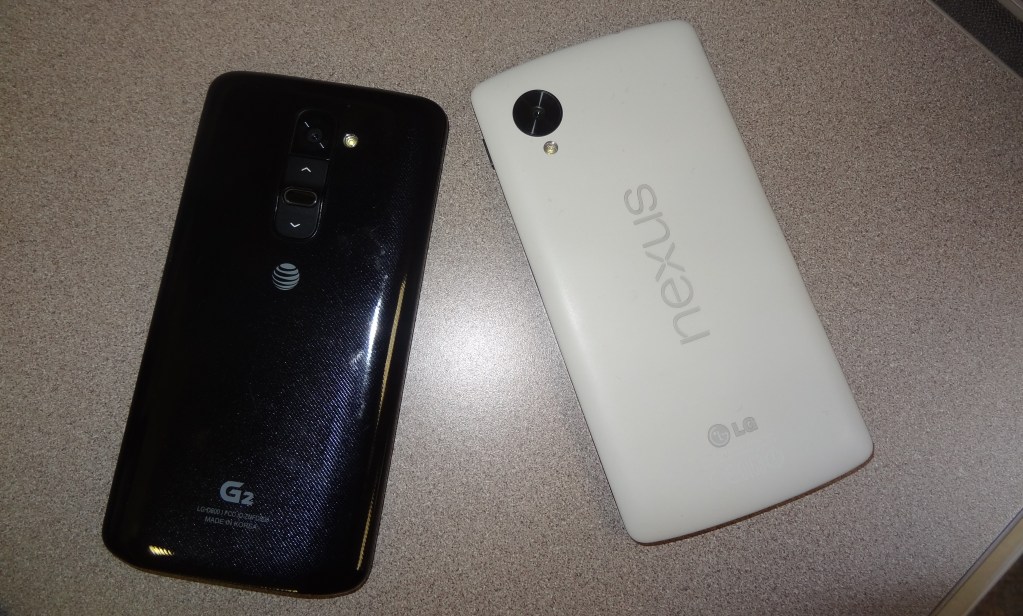 Whether it’s browsing the web, reading the latest article or catching up on some good ol’ HD videos on YouTube, both phones provide great displays. Both are using Full HD IPS LCD screens with the N5 losing about an inch or two based on its slightly smaller size. I think the colors are more vibrant on the G2 while sharpness seems to be in part on the N5. Also that the PPI on the N5 is 445 compared to the G2’s 423. I mean from the naked eye you can’t really tell the difference and I have asked and had friends favor the G2 more with it looking better. Determining which screen you like can be whether you think “brighter is better”.

The software is where the Nexus 5 excels and flips every Android device in the market on its side with it running the latest Android Kitkat 4.4. Actually since the phone has released it has made its way to 4.4.2. The Moto X also has the same update as well but doesn’t run as great as the N5. Kitkat is Android at its purest and finest, and helps navigate through the system with ease. Going in and out of applications is quicker than I ever expected and I have put the phone through its paces in every way possible. You have to remember it is pure android though and features you maybe use to in other OS’s from HTC, Samsung or LG themselves are absent in this case and leaves you to build your Android experience from the ground up. 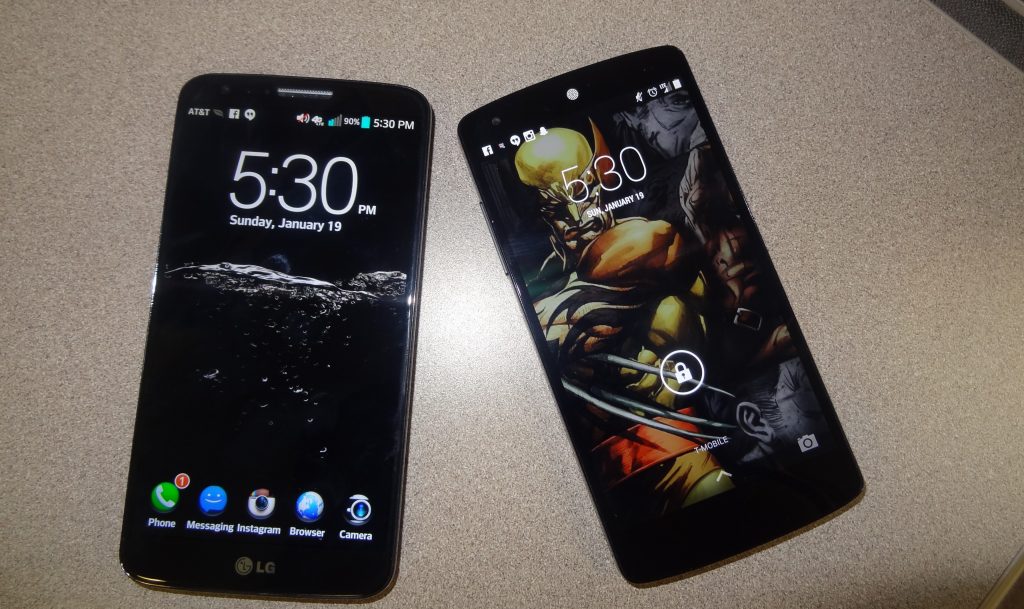 Now this is not saying that the G2 running Jelly Bean 4.2 is slow or anything. It could be the processing power mixed with how LG built its OS but its pretty speedy as well. While LG’s Optimus UI is all over the G2, it doesn’t feel like it weights the phone down and feel bloated unlike TouchWiz (Samsung) which I have found to be a problem at times. It has so much customization you can be tweaking the device for hours and won’t see yourself grabbing a 3rd party launcher unless you really need to. I would love to see how it will work with Kitkat 4.4 soon though.

The Achilles’ heel of the Nexus 5 will have to go to its battery life. It uses a 2300mAh battery compared to the G2’s 3000mAh but even then you wouldn’t expect it to be so dismal. I have gotten anywhere from 4-8hrs on the device depending on usage. There are some days it holds up and others it falls flat. On my journeys at CES I had to make sure I had an external battery always on standby as I never knew how the battery would go based on constant use. The G2 on the other hand would at time give me 12+ hours of time and still keep pushing. As both phones I would be either frequently jotting notes or taking photos to share amongst the world the G2 destroys the N5 easily.

One of my favorite Android cameras in 2013 came from the G2 with its 13 megapixel camera. If I had to I used it to take snapshots of everything possible as the detail and color were always on point as well as the focus. You can check out my Flickr HERE showcasing all the images I took at CES 2014 just from that device alone. The Nexus 5’s 8MP shooter was depressing out the box but software updates have made it better than it was. While it’s not up there with the best camera phones around it has improved a lot and you be surprised the quality shots I got out of the Nexus 5 in Las Vegas. If you want to check out my shots from CES with the N5 check my Flickr HERE. Take note I did use the LG G2 with flash at times, while the Nexus 5 I used alot with its HDR+ feature.

The LG G2 is available on various carriers such as AT&T, T-Mobile, Sprint and Verizon at various prices depending on whether you opt for a 2yr contract, or go full retail. The Nexus 5 is available on T-Mobile or Sprint with various prices but can be obtained via no contract and unlocked from Google themselves for $349.99 for 16GB or $399 for 32GB.

With the Nexus 5 being unlocked I used it with T-Mobile and the LG G2 was provided to us from AT&T. Using both services in NYC, I had no problems with voice calls and 4G LTE data coverage on both was fine with getting high speeds of bandwith on each. Only thing I can say is if you see you are going to be using large amounts of data then you might want to wander over to T-Mobile and grab one of their unlimited data plans which I do indeed have. AT&T does offer various plans which might cater to you but then again may not. Using both companies at CES in Las Vegas, I actually got great speeds and service on both which is the first time and I been there four years in a row. Usually its one or the other but looks like the addition of 4G LTE seemed to soothe those pains greatly.

The LG G2 and Nexus 5 are some of the speediest Android devices on the market and both are great to use. The LG G2 has an excellent battery life, awesome camera and runs tremendous with anything tossed at it. The Nexus 5 is pure android and gives you the latest version of Android and multitasks like no other. Battery isn’t the best but even then I find it hard to put down.
It comes out to which feels better to you based on form factors and also affordability as the Nexus 5 is cheaper without a contract but the G2 can be had practically free if you want to sign your life away for some time. It’s hard to choose a winner and I’d say to check them both out.