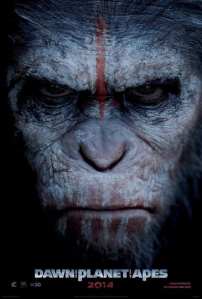 Taking place eight years after the first film “Rise of the Planet of the Apes” we seen the virus or whats being known now as the Simian Flu as spread all over the world killing millions of humans while the apes have started to take over the world as well being lead by Caesar where this all started.

After fighting the humans fought each other and the devastating virus for so long they look to bring the fight to the apes and end this reign of terror once and for all. Based on the look in Caesar’s eyes dont look like they will go down without a fight to the death.

Going to be great to see Andy Serkis continue to bring life to the Caesar character with his terrific motion capture work which he has used on other Gollum from “Lord of the Rings” and even King Kong from the 2005 self titled film.

Also check out the trippy viral PSA campaign about the Simian Flu and all the damages done towards millions of humans worldwide.

Dawn of the Planet of the Apes is set to hit theaters in July 2014.