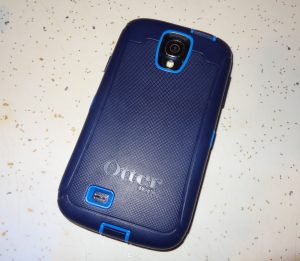 Otterbox has been around for ages providing some of the roughest and toughest phone cases around ranging from the minimal Reflex series for light drops, the Commuter Series to take a bit more bump and awe and to its highest level which is the Defender Series which is built so tough you can toss it at a brick wall(don’t quote me on that). And these are just some of the cases they manufacture. While I’m more of the minimalist type when it comes to case I’d thought I see how rough the Otterbox Defender case would work protecting my Samsung Galaxy S4.

First taking it out the box you will realize there is a lot to assembling this bad boy of a smartphone case. First is the polycarbonate layer which you will place the phone in. Next step is taking the silicone outer layer and wrapping that around it. There is a cut out for the IR blaster on top so that works perfectly fine and the silicone buttons are plush and work fine with the volume controls as well as the power button. Cutouts are also available for the camera, speaker and microUSB which as a small flap you can close up as well.

One of my favorite things about the Defender series cases is its included belt holster. Call me crazy but I also like belt clips but they haven’t been used as much with the changing of cases and some not working well with others. The belt clip felt sturdy and strong and didn’t feel like there was any way the case would come off unless I pried it out myself.

Doing a couple of drop tests with it showed it was up to par with taking those occasional “I missed my pocket” or “it slipped off the table” accidents with ease. Realistically the way its built I couldn’t see how your smartphone could withstand any damage unless it goes into upcoming traffic or something. Once again I love the belt holster and saw myself using it more then I expected as I have accustomed to just throwing my phone in my front or back pocket based on the occasion. Also with the screen protector works in conjunction with the S4 screen fine but its always noticeable that it is there.

Only thing with me is its a rather bulky case and I’m not a huge fan of them. It takes away from the overall slim design of the Galaxy S4 and may think you have another phone altogether. Also trying to disassemble this case isn’t easy as 1,2,3 and can take some time to achieve.

Overall Otterbox’s Defender Series Case is a great product for those that are accident prone and go through damaging phones faster then new models are released. As stated it does bring a bit of size and weight to your smartphone experience but for some people it is needed and easily warrantied. If your looking for extreme protection here’s your case or looking for something on the lighter and thinner side check elsewhere.

You can pickup the Otterbox Defender Series for the Samsung Galaxy S4 for $59.99 HERE or show around some of the other fine retailers.