I like to think there is only so many different ways to listen to music but I can be proven wrong time and time again. Music is a great stress reliever in my mind and the right device can set the mood and get you going. Ultimate Ears which is under the Logitech umbrella looks to bring you a different experience in enjoying your tunes with its UE BOOM wireless Bluetooth speaker. Delivering you 360 degrees of sound can it immerse you and others and rock out for the night?

The design of the UE BOOM presents some interesting options to go with it. While it is a long cylinder tube it can be positioned in various ways. Either standing straight up or laying down the choice is yours. The music still emits the same with its two speaker drives and two passive radiators. So stand in front of it, behind it, hang it from the air as it has a tripod mount. Also based on the material its water and stain resistant which means you can bring it with you from the shower to the beach. I have done the latter without any problems. There are six color choices with two of them being shown here. Besides that there is a MicroUSB port on the bottom for charging, 3.5mm Aux In-Jack, volume controls on the side, power button on the top as well as a Bluetooth button for syncing. You can always just tap it on the front to use the NFC as well. UE Boom can be paired with up to eight devices at a time which is a plus.

The UE BOOM has some tricks up its sleeve that provide some additional functionality for it being just a Bluetooth speaker. Pressing the volume buttons together will provide you with a voice telling you how much battery life is left. Also every time you power it on/off, sync it, you will get a drumroll. If you don’t feel like reaching for your phone it has the ability to take calls which is a given nowadays with these devices. Battery life is pretty good with this pumping out close to 15 hours of music listening and has gone the distance with it.

The device does shine with its UE Boom app that is available on Android and iOS. Once on there you can change the EQ, set an alarm (yes it actually has one of those) and use its “Double Up” feature. Now what is that you ask? Basically you can combine two UE Booms and use them as dual speakers. 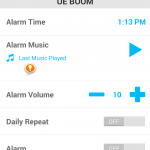 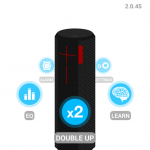 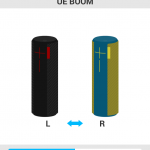 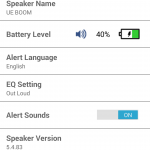 Listening to music on the UE BOOM was more enjoyable compared to some other speakers tested out throughout the year. I had taken it on a road trip with me and put it up against the Beats Pill and it blew it out the water. Sound was more crisp and clear but it does lack some bass which the Pill did have. And we listened to countless tracks on it like Kanye West’s “Mercy”, Drake’s “All Me” which are bass heavy just aren’t coming out as I would have liked to hear. But then again I think I’d take clarity over distortion and some needed bass. Luckily with the UE BOOM app, the EQ has a bass boost option that helps a little bit.

Testing out the speakerphone function on the UE BOOM was fine. I had a nice ten minute conversation and was able to hear them clearly as well as my dialogue being transmitted the other way. Speakerphones aren’t something I tend to use on Bluetooth speakers but this one works fine as I happen to be listening to music and didn’t feel like un-synching the device.

The UE BOOM could be one of the sleeper hits in the Bluetooth wireless speaker arena this year with its design and catalog of features ranging from it being water/stain resistant, having an alarm via its UE BOOM app, and being able to combine two UE BOOMs for a unique stereo sounding session. Only shortcoming is the need for more bass which the Boom could use and isn’t for the audiophile addict. Even though the price tag sits at $199.99 each ($180 if you shop around) it’s worth the amount for what’s been put into it and if you can pony up for two go for the gusto.

The UE BOOM has also made it into our Top Bluetooth Wireless Speakers:Holiday Gift Guide 2013 which be checked out HERE.