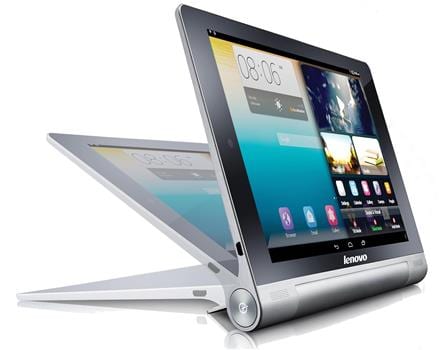 A tablet is a good device to have. However, not all tablets are good devices. What type of tablet is the Lenovo Yoga 8? I had some time to sit down with it and check it out.

At first glance, after you take it out of the box and before you power it on you notice right away just how thin, light and well constructed the Yoga 8 is. It doesn’t feel cheap at all. The design is different from the rectangular box look I typically see with tablets. The Yoga 8 has a rounded protruding bottom end which discreetly hides the power button on one side and the headphone jack on the other. Initially I didn’t understand the reason for the rounded end until I turned it to the back and I saw the flap for the kickstand. I had an “ohhhhhh” moment. 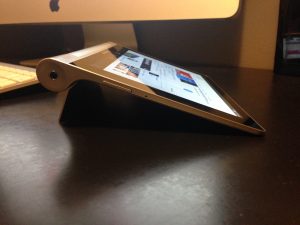 With the use of the kickstand it makes the design make so much more sense. The kickstand is functional and useful.  It’s also very easy to hold. You can stand the tablet up to watch a movie either straight up or in a lower angled position (which is my personal favorite) It makes for very easy typing. The only drawback with the kickstand is that you can’t use it to stand the tablet up in portrait style mode and there are no rubber stops on the kickstand so on a table a push can easily send it sliding but these are small things to consider. I also noticed that behind the kickstand there was a slot for micro sd cards which add some additional storage expandable to 64GB. This definitely adds some value to the tablet now that you can have so much storage for such an inexpensive device. Once I completed my cosmetic inspection I powered on the Yoga 8 to see what it could do.

The screen the Yoga 8 has isn’t the brightest and isn’t the sharpest. The Yoga 8’s LCD display has a resolution of 1280 x 800 which gives it good resolution but it could’ve been a bit sharper considering the Nexus 7 has a resolution of 1920 x 1200.  Sometimes the screen looked a little washed out and the colors looked flat at times. Watching video wasn’t too bad of an experience but not great. In other tablets I’ve seen much sharper and crisper playback. The audio wasn’t too bad either, the Yoga 8 has two front facing speakers that are loud do give you some quality and I didn’t have much complaint. However, to me audio on most tablets kind of suck anyway and I typically use headphones so I may be a poor judge here. As an e-book reader it’s just fine. The screen is bright enough to be able to read without any real strain on the eyes. I did notice a slight bleed near the bezel but nothing too concerning. It’s not the best screen in terms of clarity and color palette but overall it’s still a good-looking screen and I don’t think that anyone would be overly disappointed. 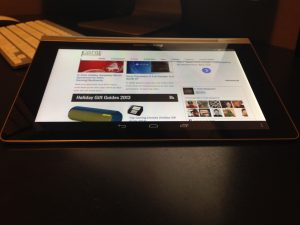 On to the camera. To be respectfully blunt, the camera is bad. Really bad. Let me say this, I don’t like the idea of taking pictures on a tablet in the first place. I’ve always thought of it as silly, besides, your smartphone more likely than not has a better camera and one that’s easier to use with much better quality. That speaks true when dealing with the camera on the Yoga 8. The pictures that I was able to take were blurry and grainy. To hold the tablet totally straight without the help of a stabilization tool built-in made getting a good shot very difficult. It has a 5mp camera in the rear and a 2mp camera in front, so there isn’t going to be too much in terms of clarity so don’t expect great photos. The default camera app doesn’t offer too much in terms of features either. It’s pretty straightforward, point and shoot.

As far as the software goes, the Yoga 8 has a 1.2 Ghz quad-core ARM processor and is running Android 4.2 Jelly Bean. I was able to update the software to 4.2.2 right away. It didn’t do much to change the performance overall but performance was solid. Moving in and out of screens was easy with no real hiccups. Occasionally there would be a delay but nothing I would consider frustrating. I was able to use my normal apps like Dropbox, google drive, Facebook, Gmail and chrome with relative ease but it wasn’t until I started to play some games that I noticed some issues. Playing a simple game such as Candy Crush was smooth but as I got into the more complex games this is where the Yoga 8 faltered. Loading Asphalt 8 took almost 20 seconds and trying to play Asphalt 8 was frustrating. It had quite a bit of frame skip, delay and ultimately I had no fun. The same with Real Racing and games that require a lot from the available hardware to work well. If gaming is what you’re looking to do with the Yoga 8. Keep it simple.

Switching between apps wasn’t difficult. Slight delay at times and I attribute that mostly to the Android software it comes. With Google releasing 4.4 Kit Kat they claim that it’s supposed to be a universal OS that supports legacy devices and upgrades devices currently running a lower software. It remains to be seen if the Yoga 8 will get Kit Kat but in the meantime as it stands the 4.2 Jelly Bean software is what you get and it works well but mostly on a basic level. 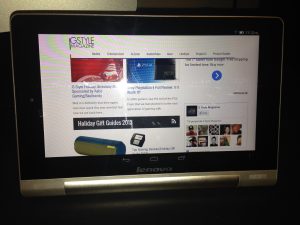 Battery Life is where the Yoga 8 really shined. It has a 6000 mAh battery and basically that means it’ll last a really long time before a charge. I was able to use Spotify, search the web, watch a movie and a multitude of other things for hours with the battery meter just gradually moving downward. I appreciated this. This is one of those tablets that you can take with you for a full day of errands (especially if you live in NYC) without having to throw a charger in your bag. I got about 8 hours of use before the available battery remaining was at about 25% which means to me that on a full charge you’d get about 10-12 hrs of use. Battery life is definitely not an issue with the Yoga 8.

As far as tablets go, the Yoga 8 is a solid performer. Are there better tablets? That’s for you to decide. With a price tag of $249 there are other options to consider such as the Nexus 7, Kindle Fire HDX or the Galaxy Tab 3 which offer a little bit more for your money. That doesn’t mean the Yoga 8 isn’t a good device. You get great battery life, a great design and an easy to use tablet. In a device these are things you want and for the most part you get that.