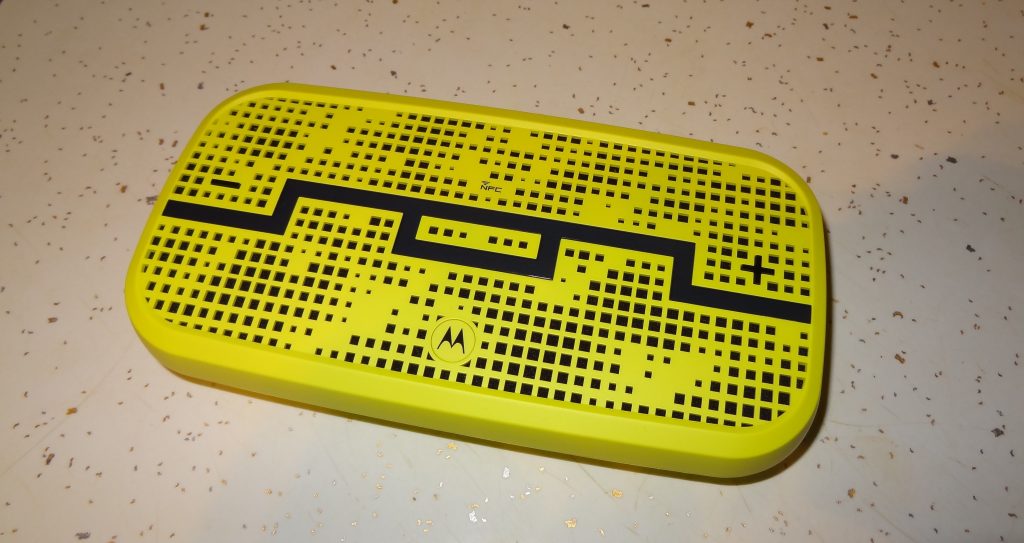 The attack of portable Bluetooth speakers continues and this time we have one from SOL REPUBLIC. What makes this device interesting is it’s based on a collaboration with Motorola who is usually known for making mobile devices, wireless headsets and the list goes on. Well SOL REPUBLIC and Motorola figured they could pool their resources together, with them doing the audio and MOTO doing the wireless actions and try and make a Bluetooth speaker unlike we have seen before. I will say the design is a bit different then what’s usually out on the market. Is the flashy DECK able to grab your attention?

I know the bright Yellow may not be your thing, even though I like it but the DECK does come in three additional colors which is Blue, Red, and Black. Rather than the circular or boxy wireless speakers you are used to seeing the DECK comes as a slightly thick slab. The way it’s designed you’re supposed to get 360 degrees of sound no matter where you stand. Splattered across the top is the SOL insignia which lights up in different colors whether your turning it on, pairing it, or doing its Heist Mode(more on that later). Around those is the volume buttons and multi-function button that blends in so well you may not notice it. It feels like a well put together device and I like the design change. Makes it easy to slide in and out our bag based on its flat shape.

There are a ton of features with the DECK worth mentioning such as it being NFC based, so just rest your phone right on top and get to syncing. The Multi-Function Button allows for pausing, fast forwarding (by tapping 2x) and going back (which is 3 taps). Holding the button allows for “Outdoor Mode” which is makes the device louder which is just a sound boost that you could use inside also if you like. The vocals are a bit clearer if anything.

A fun feature that could make the DECK the life of the party is “Heist Mode”. If you look on the back you can change it from Single Mode to this mode. Once doing so you can sync up to 5 devices to the DECK at one time. Once that’s done whoever presses play on their device takes control of the action and is designated by a different color. This could lead to some intense battles and show off to your friends who has the better taste in music. I wish I had this on my road trip a couple of months ago would have been a riot. There is a quick video of Heist Mode in action below.

As far as wireless is concerned the DECK has Super Power Wireless which is supposed to give you 300 feet as a lot of the bluetooth speakers today will if your lucky give you around 30 feet. While I didn’t test out 300 feet I did get a pretty good range on it and there was no distortion or disconnect which is a plus.

Since the DECK is lying flat and the speakers are shooting straight up of course you’re going to get that 360 degrees of sound and it delivers. Playing various tracks on it such as some from Steve Aoki which is mostly electro house style, sounded decent with some nice bass thanks to the bass port on the side. Even jamming to some old school Limp Biskit and its rap/rock tunes played off good on the device. Now while I couldn’t find anything really bad on the DECK I wasn’t really blown away by it either. It will do great in a small room that’s for sure but not sure if you go bigger than that.

The SOL REPUBLIC x Motorola DECK is a well-crafted portable Bluetooth speaker and its strategy is a nice alteration from the usual designs flooding the market. It has a high price tag of $200 which can seem a bit pricey for some but it is definitely feature heavy in its own right. If you think you want to be the life of the music scene and sway some lookers based on its funky light show pick one up.