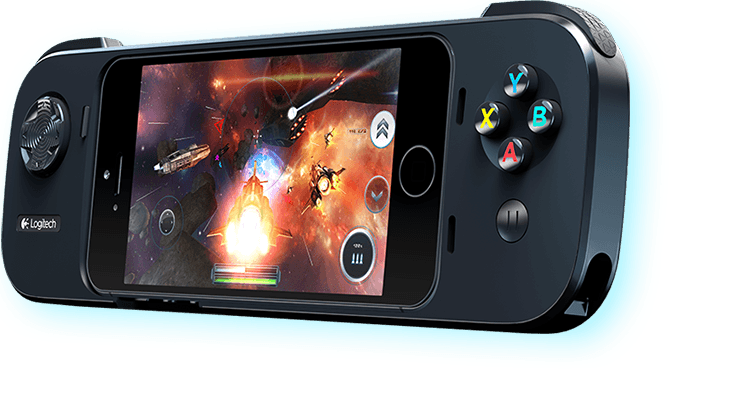 The MOGA Ace Power isn’t the only game controller in town for iOS7 anymore. Logitech just officially launched their new PowerShell game controller today which features a slightly different design from MOGA’s unit. This is a one piece unit that has more of a PSP shape to it and only features 2 shoulder buttons, a directional pad, and the 4 action buttons. It isn’t quite as “pro” looking as the MOGA unit but the Logitech PowerShell should be great for casual gamers. It’s built to be slim and portable and also functions as a back up power unit for your iOS7 device. It will support iPhone 5, iPhone 5s or iPod touch (5th generation).

You can preorder it right now on Logitech’s website here for $99.

To use this first-of-its-kind mobile gaming console, you simply insert your compatible iPhone or iPod touch into the controller as you would with a standard case. The analog off-screen controls of the Logitech PowerShell Controller + Battery deliver a gaming experience that’s familiar to console players everywhere, with a D-pad, shoulder triggers and face buttons that allow you to control game play.

As a result, you can use the entire screen for viewing the game, giving you a more immersive mobile gaming experience. And thanks to the controller’s comfortable shape, you can play for longer periods. The portable controller maintains a profile that fits easily in your pocket or small bag – putting intensive, complex games within your reach wherever you are.

“We designed this controller to deliver a true console-gaming experience on an iOS 7 mobile device,” said Ehtisham Rabbani, general manager of the Logitech gaming business. “With gaming so pervasive on the mobile platform – our research shows that 87% of iPhone and iPod touch users play games on their device – it’s time to revolutionize the experience.”

With your iPhone or iPod touch in the controller, you’ll maintain full access to power on/off, volume, camera, speakers, headphone jack and charging. And your controller’s 1500 mAh battery increases the battery capacity of your iPhone 5s, iPhone 5 or fifth-generation iPod touch. Plus, you can recharge both batteries without removing the phone from the controller.

The controller is compatible with the iOS 7 game controller framework for which a long and rapidly growing list of popular games are supported, including Bastion, Fast & Furious 6: The Game, MetalStorm Aces, Galaxy On Fire 2™ HD and Nitro™ among others available from the App Store.

The Logitech PowerShell Controller + Battery is available online beginning today for $99.99 at BestBuy.com and the Apple Online Store. The product is expected to be available with additional retailers globally in December. For more information please visit gaming.logitech.com or our blog.

About Logitech
Logitech is a world leader in products that connect people to the digital experiences they care about. Spanning multiple computing, communication and entertainment platforms, Logitech’s combined hardware and software enable or enhance digital navigation, music and video entertainment, gaming, social networking, audio and video communication over the Internet, video security and home-entertainment control. Founded in 1981, Logitech International is a Swiss public company listed on the SIX Swiss Exchange (LOGN) and on the Nasdaq Global Select Market (LOGI).