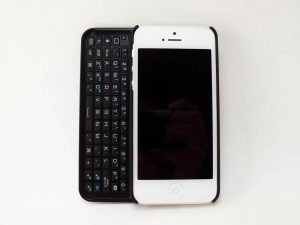 Back when smartphones were in their infancy, physical keyboards were a staple of what a smartphone had to have. I think this was mainly due to the fact that most smartphones back then ran some variation of the Windows Mobile/CE platform and they had to do their best to make messaging and typing as easy as it could be. This was also do to the fact that other devices like the BlackBerry and old Palm Treos had keyboards as well and made typing on those devices a breeze. With the release of the iPhone however, all that changed and while their were a few Android based smartphones that came out with physical slide out keyboards, those went the way of the Dodo. There are those out there who still long for a physical keyboard and for them, they can get something like the Boxwave Keyboard Buddy Case for the iPhone 5. This case turns your touch based iPhone 5 into phone with a slide out keyboard just like those you would have found when smartphones were just becoming popular.

The Boxwave Keyboard Buddy case is made up of 2 pieces really. There is the case itself which is mad from what I’m assuming is polycarbonate plastic and snaps onto your iPhone 5 like a regular case would. The case itself just looks like a regular plastic case you would snap on and doesn’t look like anything special really until you see what is attached to the bottom of it. 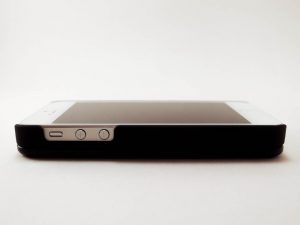 The second part of the case is the actual keyboard and unlike the case itself, the keyboard is made of aluminum. It’s pretty thin for what it is and slides easily out fro the bottom of the case. If you look underneath the portion that is attached to your device, you’ll see that it is reinforced with a metal plate so it should be quite sturdy and shouldn’t snap off. The keyboard has an on/off switch located on the rear side as well as a micro-USB port for charging purposes. If you take a look at the keys on the keyboard, you will see that the face of the keyboard is a bit recessed while the keys themselves protrude out, but not very much. The keys are of a 5-row design with the numbers getting their own set of keys. I know this makes a big difference sometimes with keyboard aficionados. Symbols are also available on the keyboard and used in conjunction with the (fn) key to activate.

What’s nice about the Boxwave Keyboard Buddy is that the keys are backlit when you want them to be. That means you can use the keyboard in pitch black darkness and you’ll still be able to see what you are typing. The backlighting is only one color though and shows through as white. The entire unit as a whole is pretty light though obviously you add a bit of bulk to what would otherwise be a really thin iPhone 5. The added thickness is reminiscent of the old HTC made T-Mobile G2. 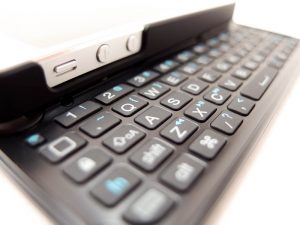 Over the past few years, I’ve grown accustomed to typing on touchscreen so coming back to a landscape oriented keyboard did feel a tiny bit weird. It’s been a while since I’ve used a device of this sort so it did take a bit to retrain myself to use one. The keys are pretty squishy and you don’t quite get that firm click like you would on something like a BlackBerry. It is nice though that you get dedicated number keys on the keypad as with the virtual keyboard, you have to tap a key to get to the numbers. This one you don’t.

One issue I had with the design of the keyboard is that the actual layout of the keys are a bit too wide. The keyboard itself stretches almost all the way to the edges which makes the edge keys a bit hard to press with your thumbs as you have to bring your thumbs really close in to type. That means your hand position has to change a bit for these keys. That was really the only issue I had with the keyboard but other than that, typing was a breeze and it does make landscape typing easier as you no longer have to have the virtual keyboard taking up almost the entire screen.

I also enjoyed the fact that the battery in the keyboard lasts for quite a while before a recharge is needed as long as you remember to turn it off when not in use. Since I’ve had it for a few weeks, I’ve only had to charge it 1 time.

Overall, it’s not a bad add on, especially if you are coming from a device that had a physical keyboard and you want something like that for your iPhone 5. It doesn’t make your iPhone 5 terribly thick either as it’s not much thicker than a traditional slide out keyboard smartphone. There were several features I really liked about the Keyboard Buddy and I think these are features you will enjoy too. I like the fact that the keys can be backlit when you want them to be and that the keyboard layout also has dedicated iOS keys to control the home button, lock screen, and ability to show or hide the virtual keyboard.