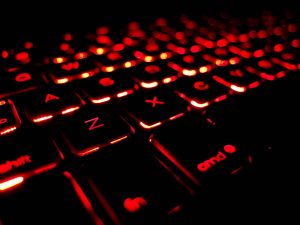 I remember back when I first purchased my iPad 2, one of the first companies that had add-on keyboards for the iPad came from ZAGG. Yes, this is the same company that brought us the Invisible Shield line of screen protectors so it was surprising to see that they had come out with a pretty good looking and functioning line of mobile keyboards. Well, ever since then they’ve been improving upon the design and feel of their keyboards with each new version of the iPad that comes out. With the introduction of the iPad Mini, they had originally come out with 3 different keyboards for it as well, the Mini 7, Mini 9, and the Flex so it’s amazing to see that even though the iPad Mini is nearing the end of its life cycle with a new model on the horizon, ZAGG still continues to support it with new, updated product.

Their latest mobile keyboards for the iPad Mini are the brand new ZAGGKeys FOLIO and ZAGG Keys COVER. What’s different about these over their prevous models is that the new FOLIO and COVER feature backlit keys in a keyboard that has a very thin profile. While both the FOLIO and COVER are similar to each other function, they differ in the way that the iPad Mini attaches to them and in form.

I’ll start off with the ZAGGKey COVER which as the name implies, is a keyboard that can also function as a cover. Think of it as a Smart Cover on steroids that not only functions as a protective cover for the screen, but also as a functional external keyboard. 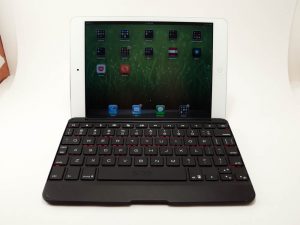 The Key COVER is made from two types of materials. The front keys and the front are made of plastic with the keys being of a smooth matte plastic while the face of the keyboard is textured matte plastic. The rear of the keyboard is a dark, matte aluminum. I’m not entirely too sure if the color matches up with the black edition iPad Mini as the one I’m using is white/silver. Since this is a cover for the iPad Mini too, there are magnets embedded into the keyboard that will activate and deactivate the screen on the iPad Mini automatically. ZAGG also made the new keyboard incredible thin at only 6.3mm now.

The one thing that sets the Key Cover apart from previous ZAGG keyboards is that this one finally has backlit keys. ZAGG however didn’t just give the Key COVER any old backlighting. Instead, ZAGG saw fit to include 7 different colors of backlighting – white, blue, aqua, green, yellow, red, and purple. They are easily changed by using a handy hotkey on the keyboard. 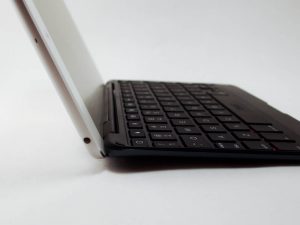 Speaking of the keyboard, this is an iOS optimized keyboard like al the previous ones. That means it has a several specialized keys included just for use with an iPad or any iOS device really. For starters, there is a dedicated home button hat mirrors exactly what the home button on the iPad does. You also have keys to enable the lock screen, activate Siri, activate the onscreen keyboard, cut and paste keys, and dedicated media control keys. These make the Keys Cover especially valuable for those who have want their iPads to be more laptop like but still want all the functionality of an iPad, controllable through their keyboards.

Using the iPad in conjunction with the Keys Keyboard is really simple too. It just snaps into a groove at the top of the keyboard and with the way that it is made, the iPad Mini stays in place. It has some kind of non-slip rubber padding in it that grabs on to the iPad mini with a tight grip. This groove is hinged so you can close the keyboard when not in use and it acts as a cover for the iPad Mini’s screen. The Keys Cover is a Bluetooth keyboard so you will have to pair the keyboard first to your iPad Mini. You do so by just turning on the keyboard and then pressing the little pair button on the side. Your iPad Mini should automatically find the device and pair to it. If you want to remove your iPad Mini, it’s easy to do as well. You can even install the keyboard in reverse so that it can be closed up behind the iPad Mini and used in reading mode. 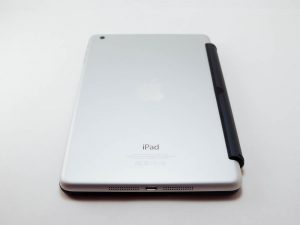 Unlike other keyboards, the Keys Cover has a built in rechargeable battery which means that all you need to do is plug a USB cable into it and then to a power source to recharge. Supposedly, the battery in the Keys Cover can work for up to 3-months between charges. That is incredibly long.

Overall, the ZAGGKeys Cover is a really great Bluetooth keyboard for the iPad Mini. It’s thin, light, and very easy to set up. The keys however can be a bit cramped as they are a little smaller than a full sized keyboard. I however still find it much easier to type on it than using the onscreen keyboard. It’s much easier to type when you can actually feel the keys.

The ZaggKeys Cover will be available soon in either black or silver and ZAGG does state that each color will match whichever version iPad Mini you have. Both will retail for $99.99 when released.

The next new mobile keyboard from ZAGG for the iPad Mini is the new ZAGGKeys FOLIO. This one is actually very similar to the ZAGGKeys COVER except that it comes with its own iPad Mini hard case that is integrated as part of the keyboard. This means that when the whole unit is closed up, it offers rear and side protection for your iPad Mini instead of having it all exposed like on the Keys COVER. Basically it converts the iPad Mini into a tiny laptop of sorts that looks like all one unit. 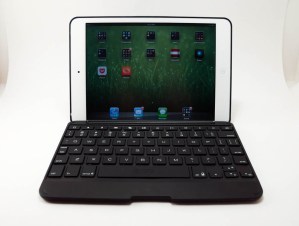 Like the Keys COVER, the keyboard itself on the Keys FOLIO are exactly the same on top. I got the black version of this one too so the keys are a flat matte black while the backing is textured matte black. The backlighting again is also 7 different colors – white, blue, aqua, green, yellow, red, and purple. They are easily changed by using a handy hotkey on the keyboard.

The back of the keyboard is where you’ll notice the differences. Where as the Keys COVER was aluminum, the Keys FOLIO is plastic but has a leather-like wrap on it. same goes for the portion that acts as a case for the iPad Mini. That part also has a portion of it wrapped in a leather-like material. This material is textured like leather and has a very nice grip to it. It makes holding it much easier while adding a bit of class and luxury to the setup. 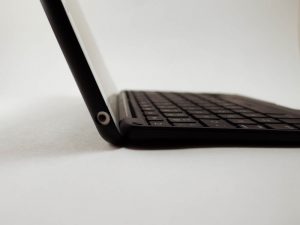 The Keys FOLIO also includes a rechargable power source that is said to last several months between charges. When it does need to be recharged, just plug in the charging cable into the micro-USB port and then the other end to a power source.

The only downside to the ZAGG Keys FOLIO would be that just like the Keys COVER, the spacing an size of the keys are bit cramped on the keyboard so they will take a little bit to usage to get used to as they are not full sized keys. Still though, using the Keys FOLIO is better than using the onscreen keyboard and of course, having the dedicated iOS buttons on the keyboard is a huge plus.

The ZaggKeys FOLIO will be available soon in either black or silver and ZAGG does state that each color will match whichever version iPad Mini you have. Both will retail for $99.99 when released.

Overall, both the ZAGGKeys COVER and ZAGGKeys COVER are wonderful choices for anyone who wants a Bluetooth keyboard that works well with their iPad Mini. Not only do they include all the dedicated iOS keys you would need, they are great for any user who uses their iPad Mini for lots of typing. Which one is better though? Well that really comes down to personal preference because both keyboards are virtually the same, they just differ in build.

I personally prefer the ZAGGKeys FOLIO as it includes protection for my iPad Mini while still also working as a smart cover. It is however not quite as thin of a setup as the Keys COVER however but I’m willing to make due with it for the added protection it provides. Both are $99.99 and again, you can’t go wrong with either.