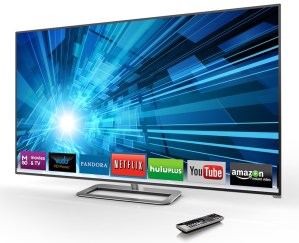 Vizio a fan favorite of mine for their products that combine great style at affordable price showed off their new M-Series line back at CES 2013 in January. Today this line has been officially announced. The new Vizio M-Series line brings faster, smarter all LED HDTVs to the masses. The new line will offer sizes from 30 inches to 80 inches, with a new ultra modern design that features near border-less frames.

I personally am interested in this series after seeing them first hand back in January at CES 2013. The pictures here do it no justice, as in person the design on these TVs look especially hot. Once again Vizio bring hot design and a great looking TV to the consumer with a very much affordable price point. I’m looking forward to hopefully checking this out for a full review at some point. If you want to check one out, you’ll be able to check it at places like Best Buy, Amazon, and Wal-Mart. Check out the full press release below.

VIZIO’s new M-Series Razor LEDTM Smart TVs are the ideal centerpieces for today’s modern families, giving rooms an instant “designer home” makeover. The signature M-Series design is available in a full range of screen size classes including 32” (M321i), 40” (M401i), 47” (M471i), 50” (M501d), 55” (M551d), 60” (M601d), 65” (M651d), 70” (M701d) and 80” (M801d) and combines enhanced picture quality and an all-new, more responsive, easy to use VIZIO Internet Apps Plus™ with an ultra-thin bezel for an immersive, near borderless TV experience. The base and neck feature unique interior metal construction for added stability, while the beautiful metallic finish complements the design and helps set the new standard for home entertainment perfection.

“The M-Series family offers an elegant blend of thoughtful design detailing and premium materials, presenting consumers with an HDTV they will be proud to showcase in their homes,” said Scott McManigal, VIZIO VP of Industrial Design. “The ultra-thin bezel reduces peripheral distractions and enhances the rich picture quality allowing for a superior edge-to-edge viewing experience.”

“As hardware manufacturers and content providers continue to align to provide consumers with a more robust internet capable experience, the market for ‘Smart TVs’ will continue to evolve,” said Stephen Baker, vice president of industry analysis at NPD. “VIZIO has been able to maintain a leadership position in LCD TVs with apps included for 2012 and Q1 2013.”

VIZIO, being #1 in the Smart TV industry7, introduces the M-Series collection which boasts a best-in-class connected TV experience allowing consumers to instantly enjoy the latest hit movies, TV shows, music and more through VIZIO Internet Apps Plus. The new, faster VIZIO Internet Apps Plus Smart TV platform allows users of all experience levels to quickly and easily breeze through set-up and get connected. The intuitive Smart TV platform offers more apps than ever before, making it convenient to start watching TV or browse apps like Netflix, Amazon Instant Video, M-GO, Facebook®, HuluPlus, Pandora®, VUDU and YouTube® using the TV’s built-in Wi-Fi or Ethernet connection to the Internet. Additionally, the M-Series collection features a backlit Smart remote that is perfect for nighttime viewing. Coming Summer 2013, all M-Series model remotes will be enabled with Wi-Fi and Universal remote features, making it easier to control all home entertainment devices, creating a better user experience.

“The new VIZIO M-Series televisions represent a significant step forward in terms of design, picture quality and connectivity,” said Matt McRae, VIZIO Chief Technology Officer. “Our Smart TV platform has been upgraded with new apps, new features and new experiences such as dual screen control from smartphones and tablets. We also focused on the basics that matter to every consumer such as a newly designed remote control and class leading picture quality.”

About VIZIO
VIZIO, Inc. is headquartered in Irvine, California. In Q2 2007, VIZIO skyrocketed to the top by becoming the #1 shipping brand of flat panel HDTVs in North America and in Q3 2007 became the first American brand in over a decade to lead in U.S. LCD HDTV shipments. Since 2007 VIZIO LCD HDTV shipments remain in the top ranks in the U.S. and were #1 for the total year in 2009 and 2010. In Q4 2012, VIZIO became America’s #1 60+ inch HDTV company based on units sold. VIZIO is the #1 Sound Bar Company and is a top rated sound bar brand 2-years running by leading consumer publications. As VIZIO celebrates its 10-Year Anniversary, it remains committed to what it does best, focus on the consumer to deliver visionary products at a great value. VIZIO offers a broad range of award winning consumer electronics that now include PCs and mobility products. VIZIO’s products are found at Amazon, Best Buy, BJ’s Wholesale, Costco Wholesale, Sam’s Club, Target, Walmart and other retailers nationwide. VIZIO has won numerous awards including a #1 ranking in the Inc. 500 for Top Companies in Computers and Electronics and made the lists of Ad Age’s Hottest Brands, CNET’s Editor’s Choice, CNET Best of CES 2011 – Television, Home Theater Magazine’s Top Picks, Good Housekeeping’s Best Big-Screens, PC World’s Best Buy and Popular Mechanics Editor’s Choice among many other prestigious honors. For more information, please call 888-VIZIOCE or visit www.VIZIO.com.