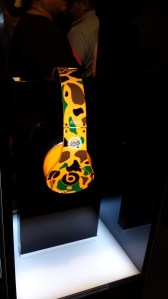 On Tuesday, Beats By Dre showcased its newest edition to their flagship Studio headphones with a collaboration by Aaron LaCrate. Aaron LaCrate is a man of many hats as he is a music producer, recording artist, film director and has his own label MilkCrate Records and clothing line MilkCrate Athletics. He has even worked with HBO to make apparel based off the critically acclaimed series “The Wire”.

Celebrities and hip-hop talent did come show support as you had big old school rappers in the house as such Slick Rick who actually performed a couple of tracks, Q-Tip, and DJ Premier on the one and twos for evening. Newer hip-hop artists such as Schoolboy Q also lend their talents to the mic. Also in the house was Yandy Smith and Lore’l from Love & Hip Hop New York fame.

They are a cool looking pair of Studios with bright colors mixed with camouflage and look to fit in the long family of customized celebrity headphones for Beats By Dre.

They are available now for $299.99 and are highly LIMITED with 30 pairs only and come with a bag and pillow with purchase.