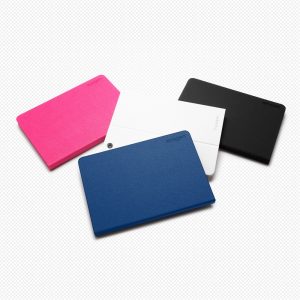 If there’s one thing that Apple products don’t lack, it’s accessories and cases. In fact, pretty much every product Apple comes out with has huge support from third party manufacturers willing to add their drop in the sea of accessories. For instance, for the iPad Mini, I’ve already gone through quite a lot of cases for it. Some were quite good with very unique designs while others were generic and just rebranded cases that other companies also carried. For me, there are only a handful of cases I actually keep handy and swap between depending on my mood. Of course I’m always on he lookout for a new case and the newest case I’m looking at and using right now is the Spigen Hardbook for the iPad Mini. The Hardbook is different from all the previous folio cases as this one is more book-like and resembles a Moleskine notebook.

The Spigen Hardbook consists of two parts fused into one. There is an inner plastic tray where the iPad Mini sits and this acts as extra protection for it as well. The iPad Mini snaps into the tray and is held in place on both the left and right sides. It seems to sit pretty securely as if you want to remove it, it does take a bit of effort to unsnap it. The tray offers decent corner protection though the top and bottom edges are exposed. There is one cutout on the right side for the volume buttons and mute switch. Since the top and bottom are exposed, it is quite easy to get to the sleep/wake button, audio jack, and Lightning port. 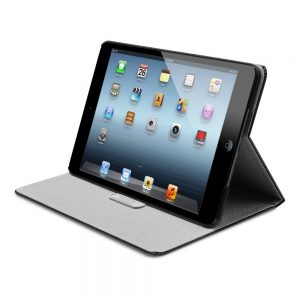 The second part of the case is what makes the Spigen Hardbook so handsome. The outer cover is attached to the inner plastic tray via what looks like some very strong adhesive. The cover is made of synthetic leather on the outside with a soft, non-slip fabric on the inside. The way it look honestly does look like the cover of an expensive hard cover book. Spigen say they use traditional bookbinding methods to make their Hardcover. When closed, it really does disguise the iPad Mini and makes it look like a plain old notebook or sketchbook. That’s the one thing that I do try to look for in a case and that is the ability to make the iPad more low-key and less noticeable to thieving eyes.

The Hardbook isn’t just a pretty cover though. It does have some features that you may find interesting. For starters, it does work like a Smart Cover which means that it can work in conjunction with the iPad’s automatic lock/unlock feature thanks to magnets embedded in the cover. These magnets also help keep the cover closed when in storage. Another feature it he ability to use the Hardbook as a stand. On the back of the case is a groove. If you fold this like in the image on the left, it creates rather nice viewing angle for watching videos. The rear of the cover even includes a cutout so the rear camera can be used while still in the case.

The Spigen Hardbook is a very good looking case for the iPad Mini. It has many features you want in an iPad case such as the auto lock/unlock and being able to use it as a stand. Besides that, the Hardbook in my opinion looks very stylish in a minimalistic sort of way. It’s not very flashy but you can get it in 3 other colors besides just plain black – Azalea Pink, White, and Navy. Black is my favorite however as it really gives off that sketchbook like feel which I’ve always liked.

You can find the Spigen Hardbook over at their site here and it retails for $39.99. Each one comes with it’s own unique serial number that you can use on their website to make sure you are buying a genuine Spigen product.