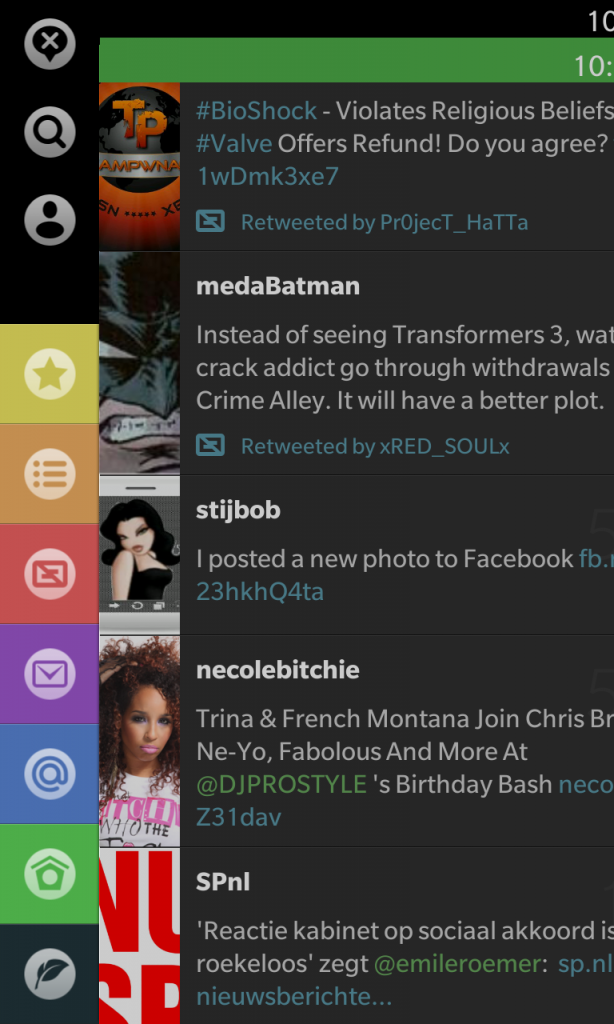 Blackberry 10 is a very visual and cool looking OS when compared to the previous versions. And Blaq takes this and does a twitter client for BB10 that is both visually appealing, but also cool when using it. When you launch Blaq you are greeted with your Home timeline tab. Blaq streams in real time so as tweets come in you will see it update. Blaq also takes a different approach to showing the profile picture of people next to their tweets, the image is put into a slim rectangle which you can click on to expand and see more of the image.

Much of the UI is simple and to the point, but it is this simplicity that make it appealing. If you want to see your replies or direct message you can pull the screen to the right and you see a color coded menu of options for this. If you want to retweet or reply to a tweet you would pull the screen to the left revealing those options as well. This is all done with a smooth and fluid motion. Visually Blaq is a well done twitter app and I would easily pick it over the regular Twitter app by Twitter.

Blaq for Blackberry 10 uses a few key gestures to navigate around it and if I were to say it definitely saves you from clicking too much to select items and in doing so helps you to “keep moving” as Blackberry likes to say as their motto. 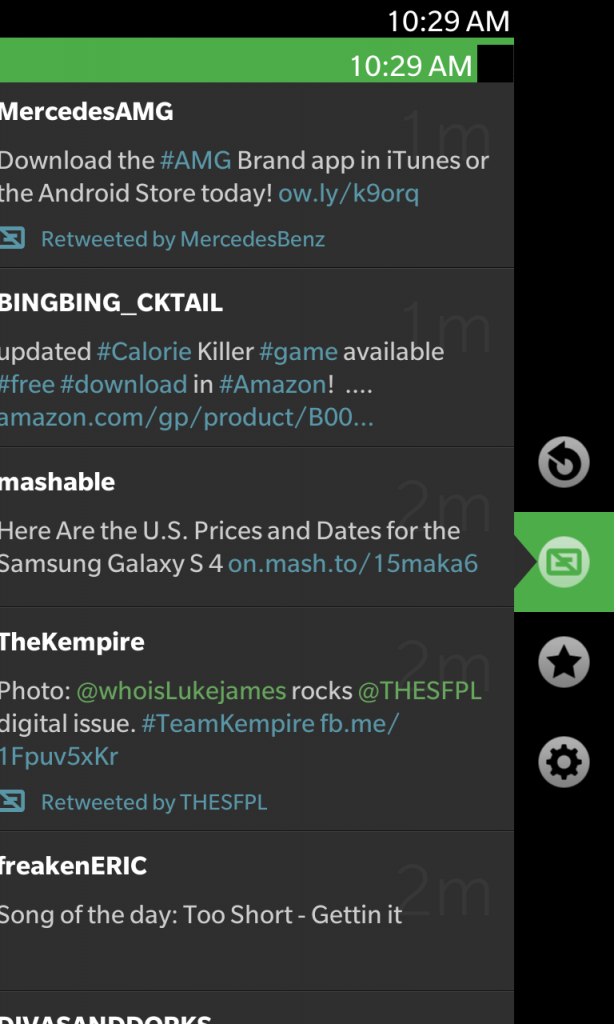 Want to view your timeline you just simple scroll down to your heart’s delight. Want to return to the top, double click on the top of the screen to be brought back to the top. Want to reply, favorite, or retweet a tweet pull the screen to the left hover over an option and let go. Be careful though as first time users may find themselves just retweeting everything as you get use to the UI. I myself have done that a few times lol. As you move around you may want to check your replies or DMs, cool just pull the screen to the right and select the area you want to visit. You’ll also find this area gives you access to your profile, search, and the ability to mute people. You can also pull down from the top of the screen to toggle between accounts and your Settings area. Yes you can have multiple accounts (at this time it is two Twitter accounts).

The controls on Blaq work well within the app and during my use I haven’t noticed any lag or studders when trying to pull, scroll, slide, or press for anything options.

Honestly Blaq is a pleasure to use. It looks good, performs well, and honestly one of my favorite apps on the Blackberry 10 platform. If I’m using my Blackberry Z10 this is more than likely what you’ll see me using on it. And there is a lot of little things that I enjoy with it. Like the ability to expand out the rectangle profile picture to see a little more. Or if I want even more I can go to the profile of the person and click on the picture to have a even large image show for it. I also like that it streams live so it always updates me having to “pull to refresh”, but at the same time if I want to pull it will refresh then as well. Then that easy way to reply or retweet by pulling to the left and just letting go on the option I need is cool. Keeps me moving honest and I don’t have to click on a bunch of buttons to get to the action I want to do. All in all Blaq is a polished app that gives a great visual flair to using Twitter on you Blackberry 10 device. Trust me you want this over the defauly Twitter produced app.

Blaq for Blackberry 10 launched today and is available in the Blackberry App World. It will run you $2.99 (intro price) for the app. This will only work with Blackberry 10 devices so if you have a Blackberry Playbook, you can’t use this on it at this time I belieev. So check it out, it is definitely a premium twitter app and a good example of hopefully more to come for Blackberry 10! Some of the feature of this app include: