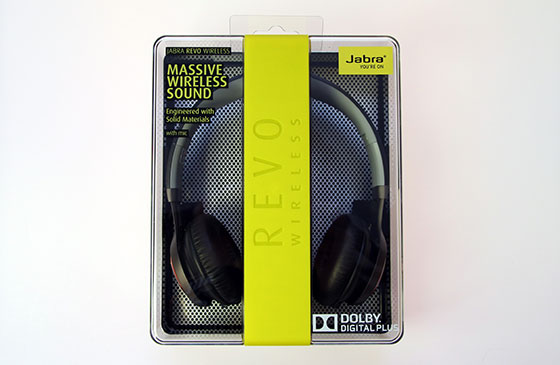 (In Shabba Ranks voice) Jabra!!!! Mostly known for their wireless bluetooth accessories for cell phones, Jabra has put on another hat by getting into the headphone game with Jabra’s Revo Wireless. These are over-the-ear, memory foam padded, bluetooth enabled headphones that give the option of going corded or cordless based on your listening device. These are not only sleek but extremely comfortable headphones, which is always a plus.

The REVO Wireless headphones include a Protective Bag, USB Cable, Audio Cable, complementary Jabra CONNECT and Jabra Sound apps for both Android and iOS mobile devices. On the cordless side using it with the LG Optimus G, quality was great. When talking and listening on a call and you can adjust the volume on the right headphone.

I wasn’t expecting much and unfortunately I was right, listening to music via wireless bluetooth connection the sound quality was the usual not so great sound. The Dolby Digital Plus aspect was close to a muffled sound similar to the bass sounding like it was struggling to get out when I was listening to Justin Timberlake’s “Don’t Hold The Wall” in Dolby. As far as the NFC connectivity, it is as simple as taping the left ear of the headphone where it is marked “NFC.”

Depending on the device what should have been a simple tap was more like tapping a circle into a square hole. Once you get the flow of it – it’s not so difficult, but no less effort than connecting via bluetooth. I’m sure as most devices get NFC capability the process will be much simpler.

Of course there’s no comparison of sound from wireless to cordless. With the audio cable the sound quality is better than the Bluetooth 3.0 sound as it is in most devices. At least the option is given to customize with the Dolby Digital Plus sound processing and a 7-band graphic equalizer to try to enhance the sound. Everything else about the REVO Wireless is very intriguing and has a lovely concept sounding like a great building block.

I look forward to the next series of Jabra Wireless headphones. But at the standpoint as a pair of headphones to compete in the headphone game, it’s still not there yet but with extra bells and whistles they have some pop. At $249 I believe they are a little bit pricey. But all in all these are a great looking pair of headphones with some great features.