Novation has done it again with a vengeance! *In Bart Scott’s voice from the New York Jets* “Can’t Wait!”

Novation announces the creation of a powerful new hardware/software instrument: Launchkey. Based around a 25-, 49- or 61-note keyboard controller with 16 velocity-sensitive multi-colour launch pads, Launchkey features the Launchkey app (an iPad performance synth) as well as a Launchpad app that provides drag-and-drop loop playback from the pads and realtime effects including stutter and filter effects. It also ships with a suite of software for Mac and PC including Novation’s V-Station and Bass Station soft-synth plug-ins and Ableton Live Lite. Launchkey’s 16 launch pads will also trigger clips and scenes in Ableton Live. 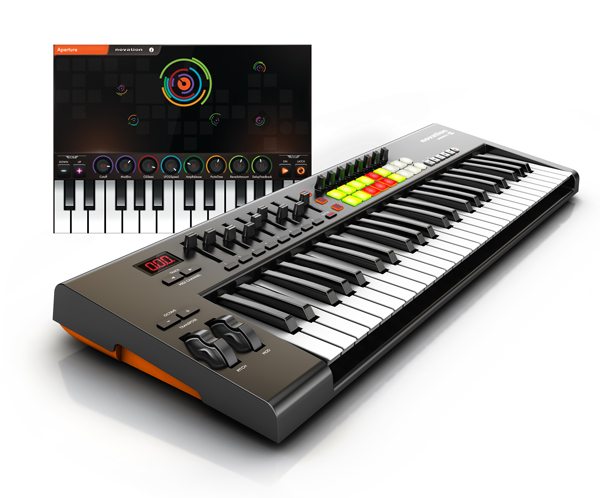 Launchkey is a fully featured DAW control surface with over 50 hardware controls (33 on the 25-note version). The 16 dual-colour backlit launch pads are velocity-sensitive and can be used to play drums and trigger loops. They also launch clips and scenes in Ableton Live. The result is more than a USB controller keyboard; it’s a powerful integrated instrument with more hands-on control than any other device in its class. In addition to the integrated instrument functionality, standard MIDI control is also provided, making it an ideal partner for a digital audio workstation, giving you instant control of track volumes, panning, sends and other settings with Novation’s InControl software integration system.

Launchkey At A Glance

In addition to software for Mac and PC, Launchkey integrates with two powerful iPad apps. The Launchkey synth app runs on iPad 2 or later and uses Novation synth engine technology in a new and intuitive touchscreen interface. Multiple synth parameters can be controlled at once to create unique effects, while keyboard knobs tie directly into synth controls. The Launchpad app uses the buttons to trigger loops and a range of performance effects including stutter and synced filter effects.