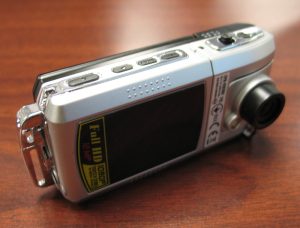 There are quite a lot of action cameras out there right now that taught features like durable rugged casings with water and dust resistance along with the ability to mount them almost anywhere you see fit. However, what if you don’t need any of that and all you want is an inexpensive, HD video camera that you can keep permanently mounted inside your car? I know that’s all I really want a video camera for is to mount to my dash so I can capture my daily drive just in case something interesting ever happens or if I need to document something for evidence. That’s what drew me to the Genius DVR-FHD560. It’s an inexpensive video recorder that features full HD recording, an LCD display screen, and a swivel lens that lets you rotate the lens a full 180-degrees.

Does the Genius DVR-FHD560 have what it takes to be a good dash mount vehicle cam? Continue reading to find out. 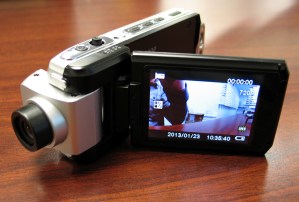 I’m going to start this off by saying that I was a bit underwhelmed when finally getting my hands on the DVR-FHD560. I wasn’t expecting the unit to be completely made out of plastic. It’s very light and has almost no weight to it which gives the whole camera a very toy like feel to it. I was expecting it to be more like the rugged action cameras that I have been seeing lately that usually have some weight to them and use better materials, but I guess since the DVR-FHD560 isn’t something that will get thrown around, there is no point using heavy duty materials.

What sets the DVR-FHD560 apart from other dash mounted cameras is that it has a 180-degree swivel lens that allows you to quickly switch from capturing video out of your front windshield to either the driver side or rear of your vehicle. The mechanism used locks at each 90-degree turn which is actually a good, thoughtful touch. Another feature that stands out is the swivel screen that allows you to view the action at different angles and positions. If you’re thinking this camera sounds like a small camcorder, you’d be right. It does look just like one and if you angle the lens to the side, you could actually use it as such. 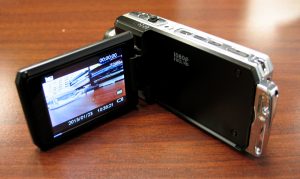 Running along the top of the top of the camera are all the control buttons. These are also made of plastic with a matte black look to them which contrasts nicely with the chrome. There is one little joystick-like control up top as well which works like a directional pad. Up and down is used for the zoom function while left is to adjust exposure and right is to turn on/off the LED flash unit. On the bottom of the camera is a rubber flap that when opened, reveals all the ports you can access. There is what appears to be an audio jack, a mini-USB port, and an HDMI port. There is also a tiny reset switch to reset the camera back to factory specs.

On the side opposite the lens, You’ll find an exposed slot for inserting the SDHC card. a tripod mount hole, and a bracket for use with a wrist strap or any other type of strap. The thing with the bracket however is that with it installed, you can really use the tripod mount as this bracket is in the way. Of course if you’re dash mounting this camera, it really doesn’t matter as the camera includes an adapter that you click on to the front of the camera that allows it to mount to the suction cup windshield mount (included).

Overall, the design of the camera itself is well thought out, though the exclusive use of plastic makes it feel really cheap. 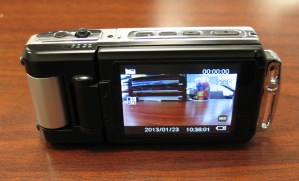 The Genius DVR-FHD560 has a very simplistic user interface, though it can be a bit confusing to use at time. Mainly, most of the confusion comes from its operating system. It seems simple enough, but using the directional stick is confusing. It does not orient itself based on how the screen orientation is so it gets confusing when up on the stick becomes right or left becomes up. You gave to hold the screen in “camcorder” orientation in order for the directional stick to be used properly. Also, there are a few menu items that make no sense and because the instruction manual wasn’t what I would call very detailed, I had to guess what some of the items were. Even now, there are still some menu items in which I have no idea what adjusting them really does.

With that said, for the most part, you really only need to stick to using the hard buttons up top to use the camera. The mode button will allow you to switch between video or still camera mode and the play button will let you view what’s on your memory card. You use the record button to start recording or to shoot an image. You may or may not also use the zoom toggle, though the zoom is useless really if you’re using this as a vehicle dash camera, though useful if you are using it as a camcorder.

Battery life is decent as I’m able to use it round trip on my way to and from work which is roughly about an hour total. After which, you want to recharge or at least connect it to a power source in your vehicle so you won’t have to worry about it running out of juice.

Other than that, it’s pretty straight forward and nothing really too ground breaking about it. I used it mainly in my travels in my car and found that for the most part, video recorded on it was stable, good quality HD, and the audio was good as well. The only weird thing is that it will chop up long videos in to 10 minute files, so for a 30 minute trip, you’ll have 3 separate files. It’s not 1 continuous video like it is with some other cameras.

If you’re looking for a simple, dash mounted vehicle cam and don’t care about ruggedness or using it for active sports, the Genius DVR-FHD560 might be what you are looking for. It includes everything you need to start recording in-vehicle footage including a handy windshield mount and adapter.  I like the fact that I can see what the camera is recording thanks to the handy flipout LCD screen unlike the action cameras that don’t have a screen and I have to pretty much guess what I’m shooting.

Overall, it’s a cheap alternative if all you want is to record footage in your car that works rather well despite some of its quirks.