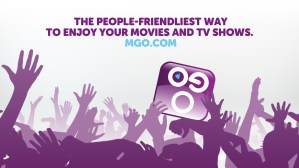 Soon, we’re going to have an array of new mobile streaming services, making it difficult to choose which one to use. One such service is M Go, which looks to gain your attention. With M Go you lose the cluttered and unorganized UI and get a clean service. The service is available on tablets, and TV’s. It’s coming to consoles and smartphones shortly. But there’s more to it.

What’s great about it is that it’s a pay as you go service. You don’t have to pay subscription fees. Content price ranges from $.99 to $4.99 so if you want to watch a movie, you can quickly open an internet browser and stream one. I’m all for that! Movies are available the same day they drop on DVD/Blu-Ray and if they don’t have it in their library, they will direct you to other services that do have the content. One of my favorite features are the profiles. Everyone in a household can have an individual profile with personalized settings.

They have recently teamed up with Starz Digital to expand their library and already have agreements with big names that include DreamWorks Animation, NBC Universal, Paramount Pictures, Relativity Media, Sony Pictures Home Entertainment, Twentieth Century Fox, Warner Bros. Digital Distribution. As for hardware, M Go has even partnered with companies such as Samsung and Vizio to have the service preloaded into their smart TV’s.

Check out the press release for full details.

To make things even easier for consumers, the company has partnered with the world’s leading consumer electronics makers for M-GO to be available as a preloaded service on the hottest new smart devices from Intel, Samsung and Vizio – with new partnerships to be brought to market in 2013 with LG Electronics and RCA. To get started, consumers simply need to open a web browser through Chrome, Safari, Internet Explorer or Firefox – and type in www.mgo.com. M-GO is also available as a free download from the Google Play Android app store.

Not just another media store; M-GO is an entertainment service and resource, aimed at becoming consumers’ first stop for finding and watching satisfying entertainment content – whether or not they rent or buy from M-GO. With such a robust and constantly expanding library of the newest releases and deep catalogue of hits, the company is confident that it will be able to gratify even the most discerning consumer searches. However, M-GO is so committed to taking the hassle out of getting great digital entertainment quickly and easily, that it is going further – if M-GO doesn’t have the content, it will help people find it on other media stores including Amazon, iTunes, Netflix and Vudu. M-GO also enhances viewing and entertainment discovery by providing movie trailers, critic reviews from Rotten Tomatoes, Cast and Crew images, filmographies and more – which provide a rich second-screen experience.

“The unfulfilled promise of ‘Entertainment Everywhere’ for years has left many wondering if they can get entertainment anywhere. Despite advances in technology and tons of film and TV choices, it still takes more effort than it should to find something satisfying to watch when and how consumers want it,“ said John Batter, CEO of M-GO. “Consumers have become used to cobbling their entertainment options together in order to get a slightly satisfying experience — switching from DVRs to subscription services to cable to media stores take time and effort which takes away from the ability to just sit back and enjoy. At M-GO, we believe consumers deserve a better, simpler, easier, more people-friendly experience and we are on a mission to deliver it – think of us as your Entertainment Wingman.”
M-GO Takes User-Friendly to a Higher Standard – “People-Friendliest”

At M-GO, being the people-friendliest way to experience entertainment means:
• Unlike other streaming and media stores, M-GO goes further. Beyond delivering spot-on search results and insightful recommendations, M-GO has a stable of entertainment experts to curate the content and help cut through the clutter to get the entertainment that is just right for each person.
• Creating a simplified experience with our E.A.P.TM (Easy As Pie) interface – which groups genres and categories such as “New Releases,” “Featured,” “M-GO Picks,” “Deals,” and “Your Library” into a patented visual display giving viewers an easier way to discover great content to watch the same day as the DVD release for many movies or the day after programs air for most network TV shows.

• An “Admin” can create up to five additional profiles per account and the “Watch List” feature so that each member of the household gets tailored recommendations, set spending limits, and their own wish list of movies & TV shows they may want to watch later.

Paying only for what each individual really wants to watch. M-GO does not lock people into ongoing subscription fees or require them to buy additional hardware. M-GO supports multiple digital lockers including UltraViolet, a digital rights authentication and home entertainment industry standard that lets consumers safely and securely download and stream their purchased movies and TV shows via a cloud-based entertainment collection for viewing on TV screens, personal computers, tablets and mobile phones.

About M-GO
M-GO is the people-friendliest, new pay-as-you-go digital entertainment service that makes it easier than ever to browse, rent, buy and enjoy the broadest, newest and best selection of movies and TV shows on your screens. M-GO was created by people who love entertainment for people who love being entertained and is a joint venture between DreamWorks Animation and Technicolor. With both technology and entertainment in the company’s DNA, M-GO’s mission is to transform the world of digital entertainment on the viewer’s terms. M-GO has secured content deals with Hollywood’s major studios which drives its always growing library of the newest releases – the earliest it is available at retail – as well as a deep catalogue of hidden gems and classic favorites. M-GO is available on all major platforms and functions on a full spectrum of operating systems ranging from Android to iOS to Windows. M-GO is pre-loaded on Samsung’s Smart TV’s, Blu-ray players and Wi-Fi tablets, VIZIO’s Smart TVs, Blu-ray players, Wi-Fi tablets and digital media players, and Intel® UltrabookTM devices. M-GO is a free service available at www.mgo.com
??

Analie (Analie NYC)http://about.me/analie
Analie is a Mobile Editor and Community Manager for G Style Magazine. A lover of all things technology, she uses gadgets for work and fun, but mostly fun. Your typical girly girl, one phone isn't enough. Currently using an iPhone 7 Plus and a Samsung Galaxy Note8, she doesn't have a preference when it comes to OS. When she's not connected to the world, you can find her playing with her beloved pets or enjoying the many sites New York City has to offer. Her latest quest? Finding all things chic and geek! Analie will soon be your fave Gadget Girl from NYC.

Okay, all is said and done, Google has dropped it's line up for 2020. First was the Google Pixel 4a which has...
Read more
Audio/Video

Now that the Google Chromecast with Google TV is available for purchase, I wanted to give you a first look at the...
Read more
Always Mobile

Upgrade Your Workout With the BlazePod Reflex Training System [Review]

Make no mistake, I am not the fitness expert around G Style Magazine. While I understand the...
Read more