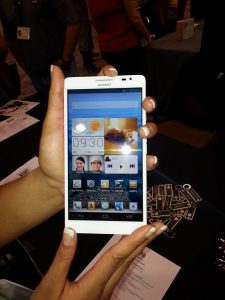 One of the first things we were out able to check out at CES 2013 was the Ascend Mate by Huawei. Some people are like who is Huawei but they have actually been around for over 20 years in the industry. They specialize mostly overseas such as in China where they were founded. Out here in the USA, you can see them working sometimes with T-Mobile as they recently did the last version of the MyTouch.

We were able to get a hands-on look at the Ascend Mate and compared it to the Samsung Galaxy Note II, which is its closest rival. The Note 2 already comes in at 5.5ins(with rumors of a S3 even bigger), and the Ascend Mate comes in at a whopping 6.1 overshadowing the device. It has a lightweight feel to it just as the Note II and was pretty responsive going through the various apps and the internet browser.

The specs include a huge 6.1-inch IPS HD display, a 1.5 GHz Hi-Silicon quad-core processor, and a 4050 mAh battery. Looking at it on the crystal black version gives it the illusion of looking even bigger then on the white version of the same device. The back houses a 8MP AF camera w/ HDR and the front is a 1MP camera. Did I mention that it’s also running Android Jelly Bean 4.1?

The good news is it releases in China next month. The bad news is there hasn’t been a solid US carrier which happens a lot with these kind of devices. I would like to see it on the T-Mobile line which would be a good fit but we will have to wait and see.