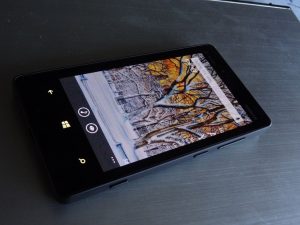 Windows Phone OS has gone through a lot of changes over the years where it was more PC based over the years up until Windows Mobile 6.5. I was a heavy user of it with phones such as the HTC 8525 and HTC Wing devices. The average user didn’t seem to be a fan of it with easier OSs out such as Apple’s iOS taking the world by storm as was Google’s Android system.

Microsoft looked to go back to the drawing board and created Windows Phone 7. A great departure from its prior OS models but much more user-friendly to the average consumer. Creating a distinct UI, it looked to make a different mobile experience. It started out slow but gathered ground when Nokia looked to make it their official OS with the Lumia Series of devices. The Lumia series were nice devices, speedy and had a great build to them. There were some shortcomings but Window Phone 8 looked to improve that. Did that happen with the Lumia 810 on T-Mobile? Lets see.

First thing you will notice about the Lumia 810 is the look. You can help but feel its the black sheep of the WP8 Lumia designed phones. It has a solid plain black rectangular design, which some people’s eyes can be deemed ugly but others but find in others. Compared to the Lumia 822(Verizon) which has a more curved design, and the Lumia 820(AT&T) has a more smooth feel to it. The build of the 810 could have been a little slimmer in my option and there is so much space on the front that it could have made for more screen real estate. 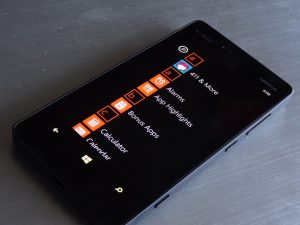 The phone itself sports a 4.3-inch AMOLED WVGA ClearBlack display, an 8-megapixel rear-facing camera, a 1.5Ghz Snapdragon processor, exchangeable shells and wireless charging. The display isn’t bad to use especially with the bold bright color icons on the Lumia 810. It works impressively good in sunlight and the screen is so sensitive it can be touched with gloves on(you can change the settings). When I say gloves I mean like mittens. I even had it in a thin clothed case and could use it.

With the Snapdragon processor and the Windows 8 OS, it provides for an easy going experience. No experiences of lag or crashing were displayed while using the device for long period times. Even going back and forth between multiple applications. As far as memory it has 8GBs built-in, I would opt to get a microSD card as you can go through that pretty quick depending on use.

Using NFC with it was a breeze. I was able to tap it on the Beats Audio “Pill” wireless speaker system and it would sync up instantly and play whatever was on the device. Unfortunately I was unable to test out the wireless charging personally for this device but have seen it in action at several events over the past few months.

When it all comes down to it, it’s all about the Windows Phone 8 experience versus that of Android and iOS. The biggest question is usually “Does it have this app?”. They have definitely made strives from WP7 to WP8 in terms of apps. Ones such as Netflix, Words with Friends, Chase Mobile, LinkedIn, iHeartRadio work better and been updated better than before. Some I even like using more on here then Android. For the apps I used I had no problem with the device. There was just the lack of ones I normally used that caused me to go back and forth. 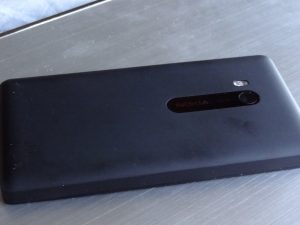 I just feel the apps could be given more love such as Facebook which just seems like an app done by Microsoft and there isn’t even a dedicated Youtube app. While there are variants on end you can find it be nice to see some more “official” apps or even if they are there to be updated. Missing some of the features you have accustomed to can be a downer. Not having faves such as Spotify, Pandora and Instagram were disappointing. Whats worse is that Google wont create any apps at all for Windows Phone.

Nokia’s own personal apps such as City Lens and Nokia Maps give a unique experience to the Lumia 810. Also not seeing any crap built onto the phone such as bloatware was a sigh of relief. The battery life was good getting about half a day of use out of it. Better than other devices have done where you could just barely get a full work day in. As well as the Photo and People Hubs on the device. Being able to just click on a person and photo and pull up all things associated socially is great.

The camera had taken some great pictures in different settings and having a dedicated camera button(yes we still like those) made for taking shots in a snap. As was recording some video with the device.

Should you buy it?

The Nokia Lumia 810 is a great device for everyday usage. Battery life is good, snappy OS and very easy to use and understand. App selection can be updated better and some of the more used ones in the social world could be added.

For someone looking for a device that is user-friendly and easy to use I’d recommend. If you’re looking to compare to the other OSs of the world I’d say not to.

The Nokia Lumia 810 is available exclusively through T-Mobile for $99.99 after mail-in rebate.