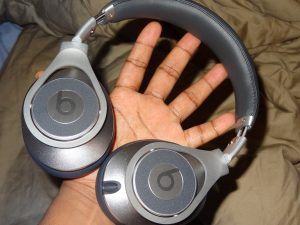 Taking a stab at making headphones after their full separation from Monster Products, the Executive looks to cater to the older mature market of listeners. It’s more business and less loud featuring a more understated silver and black. It even takes a different approach to folding up the device. It reminds me of the power of the Studios mixed with the design of the Mixers to create a more redefined look. Built with Active Noise Cancelling (ANC), the Executives should help with those long jet setting business trips right? Lets take a look and see.

First thing you will notice about the Executives is the styling compared to previous iterations of Beats headphones. These aren’t yelling at you with bright bold colors like the previous ones. Gone is the candy painted plastic and replacing it is a aluminum brushed metal feel. You can feel the difference just from touching them. They also feel more sturdy and build quality feels much better. The headband is covered in a leather material which also feels better on the head than the plastic Beats users are accustomed to.

On the left ear cup (which appears to have a magnet in it for the lid) is the battery compartment as to power the ANC it uses two AAA batteries. Beats Electronics states you should be able to get about 25 hours of playing time on it. If and when they die make sure to have a backup pair without them, you cant listen to any music. I never have been a fan of Active Noise Cancelling option only headphones. But I guess you would adapt to it eventually.

On the right side is the option for turning on the ANC. Providing a bright green light indicating its on. Only thing I’m afraid of is accidentally leaving it on(which I did the other day), but I would imagine the reasoning of the green light being so bright as you cant mistake that its off.

Running through T.I.’s new album “Trouble Man: Heavy is the Head” there are a nice amount of tracks to test these out on. “Ball” and “Wildside” has some are some pretty bass driven tracks. I do feel the bass is slighty stronger in these than the Inspirations but I may give clarity edge slightly to them. 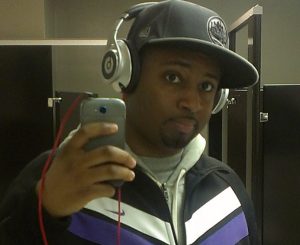 Listening to R&B tracks from Alica Keys (Girl on Fire), and Rihanna (Diamonds), the vocals were very clear and understandable when hearing them hit the highest of notes. Mixed with the booming bass I felt as if I was in my own private R&B concert.

As far as the Active Noise Cancelling, it does a superb job of blocking out your surroundings. From the crowded trains and buses in NYC to the busy city streets, I couldn’t hear a thing around me. Not saying that’s the best thing in the world but if it can block these all out they should do just fine on a decent airplane ride.

Better Beats then Before?

I’d have to say the look of these alone are a eye catcher. Just by their simple styling with a touch of Beats. I wont lie I wasn’t the biggest of fans of Beats headphones in the past but giving these a chance I’m impressed by the results compared to prior models. I think the clarity could be cleaned up slightly but that’s about it.

If your a fan of Beats headphones you should pick these up, of course for the better sound quality but also the build quality as it looks to be the best model they have created to date.

Beats Executives are available now at various electronic retailers for $299.99