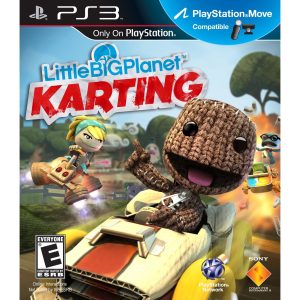 As most of us know by now, Comic Con has hit New York City. All sorts of people can be found invading the Jacob Javitz Center, some even come in cosplay. There is something for every one here; the heavy gamer, the light gamer, the family, the comic book obsessed. It’s something that you must experience to witness the diversity.

Of course like in many broad categories, not everything is for everyone. I was immediately attracted to Little Big Planet Karting (I grew up with the original Mario Kart and I played Little Big Planet on the PS3). I love the little Sackboy. He is just adorable. The game has a bit of familiarity of Little Big Planet Move.

So what makes this game different than the other kart games? It brings the creativity from previous Little Big Planet games. Customization goes to another level with characters, mini-games, tracks, and even the rules. Of course there is online content and communication that can further help you customize the game.

Playing the game was fun. I obviously couldn’t get through everything in ten minutes of playing time. But I will say that it isn’t the same as the other karting games. It was a challenge within a challenge. Using the move remote added a nice touch. In case you didn’t know, I’m a sucker for peripherals. It didn’t take long for me to get competitive. You can unlock weapons as you level up. The attacks that you can use on others are pretty funky. You can pre-order online. Will this be one of your stocking stuffers?

LittleBigPlanet Karting is a Kart Racing game that incorporates the familiar Platforming, and user generated content elements of the LittleBigPlanet universe, that sets the game apart from all kart racing games before it. The campaign of the game features a racing game mechanic in which players compete across tracks, with the goal of saving the Craftworld universe. The tracks of LittleBigPlanet Karting are filled with unique challenges, obstacles, mission objectives, boss battles and mini-games, which require much more than standard kart racing games. Along the way players gain access to a wide variety of weapons and power-ups that can be used increase their progress and/or impede that of opponents.

Along the lines of creativity, LittleBigPlanet Karting is also a true LittleBigPlanet game, firmly embracing the “Play, Create, Share” of the game series. Players can customize their Sackboy, as well as their karts, tracks and the rules to races. With this extreme freedom, races can be molded to be as constricted or open as the player chooses, and include as many obstacles, platforming challenges and mini-games as can be dreamt up. The game also incorporates familiar LBP grapple hook functionality, adding exciting platforming options to track/game design. Once tracks/games are created, they can be shared online through the PlayStation Network with other players in the LBP community. Multiplayer functionality includes four-player support in local play and support for up to eight players in multiple modes online via PlayStation Network.