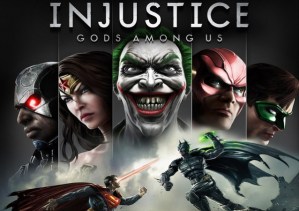 If you’re a lover of DC Comics and fighting games; its a no brainer to stop by the DC Comics booth at the NY Comic Con this weekend, and be able to test out Injustice: Gods Among Us. The game was first announced at E3 this past summer and is being created by NetherRealm Studios and who created the near classic revival of Mortal Kombat(aka MK9) back in 2011.

Mortal Kombat was a game that released that time that many considered a sleeper hit based on going back to the roots of its fighting game mechanics and also bringing you a interesting storyline that spanned thru the first three games of the series.

This time around Injustice is set to bring you the good old heroes vs villains battle but I wouldn’t be surprised to see of the same sides fighting each other in some kind of way.

Now at first glance you would think Injustice was a Mortal Kombat game with a DC Comics skin on top of it. As I was ready to jump and play that way; the DC Comics rep informed me that wanted to give Injustice its own feel and look to help differentiate itself from Mortal Kombat. Which was actually interesting to see and hear. Instead of two kicks and two punch buttons, the layout was from light, medium, hard, and a character specific button that give the character its own unique move. Also the block is utilized via holding the back button instead of a dedicated button like MK.

As I played with Batman, he would kick, punch, use his grappling hook and throw batrangs at you. The combat system was nice; depending how I did the move; they would counter or come behind you and set up for a juggling combo.

Each character has their own style, and each level has different interactions so some characters work better with them then others. So you may want to choose both of these wisely. The super combos were anything from all out powerful to just zany depending who does them.

So far the roster sits at a cool 12 heroes and villains; but I would hope (and expect) to see some more fan favorites added to the fray by time release date comes next year.

UPDATE: The game is now available for pre-order at GameStop