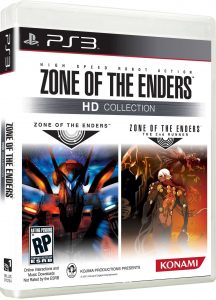 Arriving on Xbox 360 and PlayStation 3 in a fully remastered, high definition format, the games feature the engrossing storytelling of Hideo Kojima paired with thrilling robot fights in a futuristic interplanetary setting. Players control fast and powerful mechs (robots) known as Orbital Frames to blast their enemies into oblivion.

ZONE OF THE ENDERS — Hop into the cockpit of futuristic fighting mechs in the high-flying warfare of Zone of the Enders. Developer Konami and famed Metal Gear Solid mastermind Hideo Kojima bring the fast-action, nerve-blasting airborne combat directly into your living room. Save the population of the Jupiter moon Europa from destruction as you blast your enemies into oblivion with the awesome firepower and slicing swords of your Orbital Frame mechs.

ZONE OF THE ENDERS 2 — Players are once again thrown into an interplanetary conflict in this ZOE sequel, but this time the stakes are even higher, as the fate of Jupiter and Mars are held in the balance. Players will find a host of new gameplay features to help balance the odds. Exhilarating new maneuvers enable players to swing around enemies, target and destroy swarms of enemy fighters, tear down walls to use as shields or as a weapon, and even teleport out of danger. There are also more sub-weapons that support basic attacks and enhance strategic play during combat.

Grab enemies, unleash a whirlwind of blade strikes up close, and fire off guns from a distance, all while spiraling freely in the open air.

Achievement and Trophy support- Show off your accomplishments.

Includes demo for Metal Gear Rising: Revengeance. Get a first look at the slashtacular demo for the next Kojima Productions release.

You can pre-order The Zone of the Enders HD Collection on Konami website.