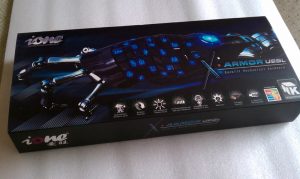 “Grab a ball point “clicker” pen and start clicking! As you press down the spring resists your finger until you reach what is called the “tactile point”. At the same time you hear a “click”. That is what is meant by a tactile and clicky switch. Some switches don’t click but are still tactile. Some feel like the beginning part of that ball point pen – no click or tactile point but a springy rising force. This is called “linear” in switch terms.” -Ripster on Geekhack

One very good example of how the cherry blue switch works can be found here. Now we’re down with the introductions, lets get started then shall we? 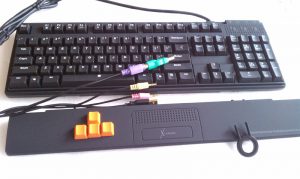 The keyboard is in fact just exactly like most other keyboards so there really is no big issue. Keep in mind this keyboard does come with 8 levels of backlighting which honestly, looks pretty darn amazing when the lights are off. The extra usb ports and audio jacks are placed at the top of the keyboard allowing for easy access. This area is clearly labeled however I’m not really sure on the design in this area. (The square hole pattern.) Overall it has a bit of a rugged appearance but if we’re playing games in the dark who really notices it? One thing I want to mention is that some keys were not as bright as the rest of the others. Not entirely a big deal but it may bother some people here and there. There is a light rubber coating on this keyboard so for all you sweaty gamers your hands will be leaving visible marks. 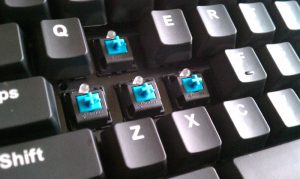 Performance: 9
This is the first cherry blue keyboard I owned. Prior to this I’ve been using Das’ cherry browns. What this means is that I am more used to lighter strokes. When this keyboard arrived I had trouble typing on it without bottoming out (Clicking a key all the way until it hits the bottom of the keyboard.) Its been a week now and I’ve gotten better at it but I still bottom out some certain letters time to time. This really has NO affect on the score I gave it. It is just some information I would like the readers to know prior to my actual thoughts before they decide my review is biased. Now the actual issue with this keyboard would be that it uses cherry blues. A recent survey was taken regarding whether users had trouble gaming on cherry blues and roughly 40% of the people who answered said yes. But hold on, why does this pertain to gaming? Well simply because it is called the, “XArmor U9BL LED backlit mechanical gaming keyboard” and thus I am going to judge it as one. Why are blues sometimes troublesome for gamers? The cherry blue’s release point is above its actuation point. This means if you were to double click a key you would have to release the key (possibly even back to its neutral position) before you can press down on it again for it to register. Throughout some testing for myself, I have run into some troubles here and there due to this double clicking problem but nothing serious enough to bother me. The good news is that XArmor is planning to come out with a new keyboard with new switches. (Supposedly browns from what I heard.) 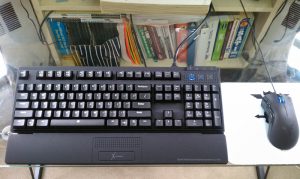 This keyboard retails for $130 USD. Why is it that expensive? Well if you didn’t bother to read the links posted in the introduction, its basically because of its build quality and unique typing experience. Mechanical keyboards can outlast a regular membrane keyboard. Is this a fair price though? Let us put it against its competitors say Filco, Das, and maybe even Razer’s Black Widow. They are all roughly in the $100+ range so the price at which the XArmor is actually quite fair. If you would really like to see what’s so special about mechanical keyboards I would recommend you get one with cherry blues first as these are the most distinguishable against regular membrane keyboards due to its tactility and clicky switches.

Ending thoughts: This is one of the few mechanical keyboards out there that has its own backlighting. Now that I have two keyboards, what exactly do I do with my other one? I’ve decided to plug both in and use each according to its strengths. The XArmor keyboard would definitely be my weapon of choice against a 10 page paper but my good old Das with cherry browns will remain dominant in the battlefield. If you do end up collecting excess keyboards, pass them around! Let your friends feel what they’ve been missing.

Review unit was provided by XArmor.